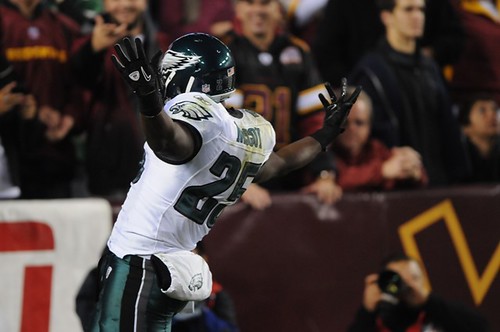 1. “Halfway There” by Soundgarden

During the Mike Shanahan era, the Washington Redskins defense has had little trouble making a splash right out of the gate. In fact, Jim Haslett’s men have now scored a touchdown in all four home openers — starting with DeAngelo Hall’s 33-yard fumble recovery against Dallas in 2010, followed by Ryan Kerrigan’s nine-yard interception return for a touchdown against the New York Giants in ’11 and let’s not forget Rob Jackson’s interception for a touchdown against Cincinnati last season.

Well, Jackson is suspended for the first four games of the season, so that left Hall and Kerrigan to make some more magic and they didn’t disappoint — with Kerrigan deflecting a backwards pass attempt by Philadelphia Eagles quarterback Michael Vick, and then Hall scooping up the football and returning it 75 yards at a leisurely pace for the easiest score of his NFL career.

Just like that the Redskins were off to a wonderful start and all was good in the burgundy and gold universe.

2. “Light Up The Sky” by Thousand Foot Krutch

Of course, it’s probably not a great idea to peak in the first four minutes of a 60-minute affair.

Once the Redskins jumped out to a quick lead, things quickly devolved into what can only be called a worst-case scenario. Running back Alfred Morris, who only fumbled the ball three times his entire rookie campaign, coughed up the football on the team’s very first offense play of the season. One play later the Eagles scored an easy touchdown and suddenly led the game 10-7.

Morris’ second rushing attempt lost three yards, which, sadly, is a “highlight” when talking about just how bad he looked to start the game. And then the second-year pro bobbled the ball on a pitch out, which resulted in a safety. Obviously this is a game Morris will be in a hurry to forget.

LeSean McCoy, on the other hand, had a career day as he abused the Redskins defense seemingly at will. When the ‘Skins were passive, he gashed them up the middle. When they got overly aggressive, he had an answer for that as well.

Take, for example, outside linebacker Brian Orakpo, who was cleared amp up to get back out on the field after missing most of last year due to injury. As talented as Orakpo is, he repeatedly over-pursued throughout the game, which allowed McCoy to bounce back outside to the gap Orakpo just vacated. If you’re rooting for the home team, that’s a bad thing. If you’re an Eagles running back, it’s a dream come true (which explains his 181 rushing yards for the night).

Basically, whatever the defense tried to do, McCoy had a counterpunch ready and if this was a prize fight, it wouldn’t have lasted more than a round or two before McCoy won by a TKO.

Oh yeah, I guess I should also mention that Robert Griffin III made his triumphant return to action as he took to the field for the first time since he blew out his knee during the disappointing home playoff loss to Seattle.

After having not played a single snap during the preseason and being held back as much as possible by his suddenly overprotective coaching staff, the football-loving world was obviously anxious to see how RGIII fared. Much like Morris, Griffin did not have a wonderful first half of play.

*The camera never panned over to the Redskins sideline, but I’m willing to bet that Rex Grossman was beaming like a proud parent after that terrible decision. Considering he’s made a living throwing those types of passes, it was almost as if he had snuck into the game when no one was looking.

Add in an interception on the team’s first drive of the second half and that’s not exactly the start the Heisman Trophy winner was dreaming of for the last 246 days.

“We didn’t play well in the first half at all. We had a serious case of the ‘can’t-get-rights,’ just penalties, hurting ourselves – you know,” Griffin said after the game. “I don’t throw picks, Alfred doesn’t fumble and [kicker] Kai [Forbath] doesn’t miss field goals and all three of those happened tonight.”

Griffin completed just six of his first 15 pass attempts with two interceptions, which was more than enough reason to cause concern in our nation’s capital. But offensive coordinator Kyle Shanahan simplified things and basically enabled RGIII to be able to work some of the rust of by dinking and dunking with quick hits to targets who were typically five or six yards away. Although he’s usually one of the most accurate passers in football, RGIII was off target on 11 of his 49 pass attempts for the game and his footwork was uncharacteristically sloppy.

In the end, Griffin might be one of the NFL’s most gifted players, but even he needs some help from time to time. And, luckily for him, the junior Shanahan was willing to switch things up on the fly, which enabled his offense to finally get going. Sure, it was 33-7 by the time Washington showed signs of life, but better late than never, right?

4. “Dirty Little Secret” by Bullet For My Valentine

One year ago, the Redskins used the element of surprise to stun the New Orleans Saints at home in a thrilling Week 1 victory. Watching the Eagles in the first half, I began to sympathize with what Saints fans must have felt as Griffin and friends cruised up and down the field with such ease.

Philadelphia’s offense ran 53 plays in the first half alone. I repeat — 53 plays in a single half. That’s insane. They racked up 21 first downs, 322 total yards and had the ball for more than 20 minutes in the first two quarters of play. Conversely, Washington ran just 21 plays, had just three first downs and just 75 yards of total offense.*

*Think about that for a second — Philadelphia had as many first downs and the number of plays the Redskins ran, while Washington had as many turnovers as first downs. Good times.

To recap, the defense couldn’t get off the field, the offense couldn’t hold onto the football for more than three plays in a row and special teams did nothing of consequence. Things were so bad, Washington’s offense didn’t run a single play on Philadelphia’s side of the field.

In short, I’ve seen dumpster fires that were more entertaining than what the Redskins were able to accomplish in the first half of play.

Because it couldn’t have gotten much worse, the Redskins finally looked like a professional football organization for the final 15 minutes and six seconds of the game — thanks to a six-yard Morris run and a pair of touchdown catches by Leonard Hankerson. The Redskins still lost 33-27, but at least there were a few areas worth spotlighting.

Like Hankerson, who led the team with five catches for 80 yards and two scores. Not a bad outing for a guy who still scares the hell out of me every time he double catches a ball and makes a reception much more difficult than it needs to be just to drive ‘Skins fans mad.

Or linebacker Perry Riley, who quite possible played the best game of his NFL career. He was one of the few players who Vick and/or McCoy didn’t embarrass and he even added a fumble recovery, just for good measure. I’ve been saying for more than a year now that Riley is a star in the making. Hopefully he’s in the process of making me look smart.

But because this was an ugly loss, we can’t try to put lipstick on this pig. Too many players in every phase of the game looked ill-prepared for the start of the ’13 season and now the Redskins are headed to Green Bay, and trying to avoid starting the season 0-2.

Between now and next Sunday, there is plenty of areas to improve upon. For starters, rookie safety Bacarri Rambo still can’t tackle anyone in the open field. All Vick had to do was twitch his shoulders and Rambo froze, making it all too easy for the veteran to roll ahead for another 10 yards or so.

Undersized receiver Aldrick Robinson spent the entire offseason trying to prove he can do more than just go deep every time he’s in the game. Well, whenever Griffin attempted a pass in his general direction, the tiny wideout was covered. With all that speed, he’s simply got to find a way to create some sort of separation between him and the defender or he’s useless to this offense.

And let’s not forget rookie returner Chris Thompson, who spent far too much time dancing side to side rather than tucking the ball and simply taking what was there. That’s why Santana Moss was back there catching punts during the fourth quarter. If each of these three young men can step up their respective games sooner rather than later, it will greatly help the Redskins rebound from this disappointing letdown against the Eagles. If not … well … let’s not go there.