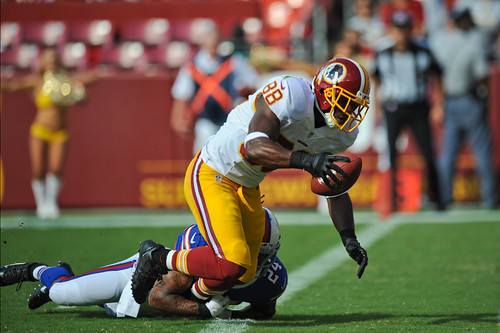 Historically speaking, the third preseason game is the most important preseason game. Typically, teams use it as a dress rehearsal for the regular season — allowing the starters to play for most, if not all, of the first half.

Well, as you know by now, the Washington Redskins aren’t like most teams.

With starting quarterback Robert Griffin III coming off of major knee surgery and backup quarterback Kirk Cousins sidelined after suffering an injury against the Pittsburgh Steelers, the ‘Skins were more than happy to be overly cautious heading into their third preseason game. That is why head coach Mike Shanahan was more than happy to roll out Rex Grossman and Pat White at quarterback, while also limiting his starters to roughly 15 snaps worth of action.

While it’s safe to say Shanahan and company would prefer to put the ball in the hands of Griffin or Cousins, the two-time Super Bowl winning coach was pleased with the performance of his third and fourth-string quarterbacks in Washington’s 30-7 rout over the Buffalo Bills. The not-so dynamic duo combined for 267 passing yards with two touchdowns and no interceptions, which is probably the best-case scenario for these two flawed passers.

“You never know how a game’s going to go,” he said. “But when you’re the second-team, third-team, or fourth-team quarterbacks, that’s what happens during the game you have to come off of the bench cold. You have to produce even though you’re not warmed up and we wanted to put both guys in that similar situation today. We wanted both to get a chance to play with the same players. We wanted to give Pat a chance to play with the starters and Rex started the game, and I was pleased with both guys and how they played.”

While the performance by Grossman and White would have been more than enough cause for celebration, Washington’s ground game was even more impressive — racking up 208 yards on 43 carries (4.8 yards per carry) and a touchdown.

Honestly, it didn’t matter which running back had the ball in his hands or which Bills defender was in front of him — all four running backs who carried the ball had little trouble moving the chains. Alfred Morris started the game, and carried the ball four times for 16 yards before Shanahan wisely removed him from the game to ensure he remained healthy for games that actually matter.

Rookie Chris Thompson ran for a career-best 44 yards, although he did fumble for the second time this preseason. He also contributed with a 31-yard punt return, to try and atone for his lack of ball security. Keiland Williams rushed eight times for 52 yards and a touchdown, which will likely help him land on a roster — either in Washington or elsewhere in this running back starved league.

And the most impressive showing of the day came courtesy of Roy Helu Jr., who led the way with 13 carries for 70 yards on the ground and one catch for 21 yards in the passing attack. While the question with Helu is always going to be “how many games in a row can he remain healthy for?” He once again showed his coaches that, as long as he’s able to play, he’s going to be a dependable second option behind Morris.

Opposing teams are already intimately familiar with the pass-rushing skills of Brian Orakpo and Ryan Kerrigan, but the gentlemen behind them at outside linebacker are doing their best to make a statement with their play as well. Rob Jackson filled in admirably for Orakpo last season, while the sack specialist was sidelined for the bulk of the 2012 season, but he is set to sit out the first four games of the ’13 campaign after testing positive for a banned substance.

That has opened the door for players like Darryl Tapp and rookie Brandon Jenkins to lock down roster spots, and each has managed to rise to the occasion throughout this preseason. Tapp led the Redskins’ defense against the Bills with seven tackles, one pass defended and a sack. Jenkins chipped in three tackles and a sack.

One guy is in the process of switching from a defensive end to an outside linebacker for the first time in his professional career. The other is a fifth round draft pick who is still learning what is expected of him when he’s allowed to take the field. But if the two of them continue to perform like this whenever they’re in the game, it’s going to be virtually impossible for the defensive coaching staff to keep them on the sidelines.

In related news, the Redskins actually ran a play or two against Buffalo with six linebackers on the field at the same time. I guess Jim Haslett and friends understand the embarrassment in riches they’ve got at the moment at linebacker, so they’re doing what they can to figure out a way to utilize as many of them as possible.

4. “Hold You Down,” by Childish Gambino

Second-yeard cornerback Richard Crawford — who continued to show improvement throughout this offseason and appeared ready to take on a bigger role with the team on defense, as well as on special teams as Washington’s primary punt returner — is now done for the year after injuring his left knee on a punt return.

This is the part where I once again mention how much I hate the preseason and wish the NFL would shorten it to two games. The games don’t matter, and yet, injuries like this one to Crawford still happen with alarming frequency. The Redskins, who were already thin in the secondary, must now prepare for the season without the services of Crawford, as well as rookie safety Phillip Thomas. Add in pre-existing injuries to Brandon Merriweather and Josh Wilson and there might come a day when the Redskins are forced to ask some of those talented linebackers to convert to safety.

In the interest of fairness, I will also point out that Bills quarterback Kevin Kolb was knocked out of the game with concussion-like symptoms and running back C.J. Spiller also had an injury scare during the game. Things are so bad for Buffalo now that they brought in Matt Leinart and John Beck* for tryouts after the game in hopes of finding another able-bodied passer to fill out their roster.

I’d say I feel bad for them, but honestly … I don’t. Those bastards ran the score up on the Redskins in Toronto a few years back and ruined my first trip north of the border. Screw those guys and their awful team.