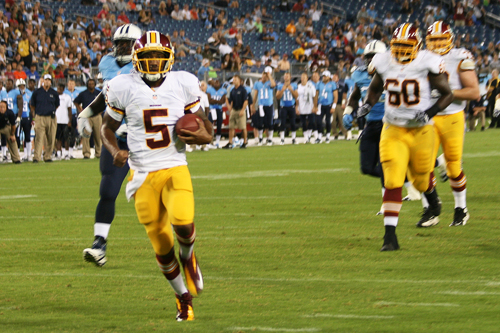 1. “Safe And Sound” by Capital Cities

Say it with me – the final score of a preseason game is meaningless. Ten minutes after the game ends, no one cares.*

*Seriously, can you even name the four teams the Redskins played during the 2012 preseason without cheating and looking it up? More likely than not, the answer is no.

Washington Redskins coaches, as well as the rest of the NFL, simply want to have the opportunity to evaluate the players competing for roster spots – especially when it comes to the bottom third of the roster.

Most importantly, everyone just wants to avoid any major injuries. Get a chance to see your players lineup and compete against someone wearing different color jerseys and get them out safe and sound, and that’s a successful evening. And if you’re able to walk away victorious – as the Redskins did against the Tennessee Titans in their 22-21 preseason opener – that’s just icing on the cake.

2. “Born To Rise” by Redlight King

When the Redskins opted to utilize a fourth-round pick in the 2012 NFL Draft to select Michigan State quarterback Kirk Cousins, the move was heavily criticized by both fans and media members alike.

Apparently, even though the franchise had just gone through an entire season with Rex Grossman and John Beck “playing quarterback,” conventional wisdom was that the 102nd overall pick in the ’12 draft should have been used to bolster another position on the roster – especially since the team had already landed franchise savior Robert Griffin III 100 picks earlier.

Of course, Cousins already began to prove his worth last season when he stepped in for an injured Griffin against the Baltimore Ravens late in the season and then again when he got his first career start versus the Cleveland Browns.

Fast forward to now and Cousins is scheduled to play with the first-team offense throughout the entire preseason as the coaching staff practices caution while RGIII returns from the devastating knee injury that abruptly ended his rookie campaign.

Even though he attempted less than 50 passes last year, it’s crystal clear that those limited reps have been enough to bolster Cousins’ confidence. Now when he walks onto the field, he does so with the poise and maturity of a proven NFL starter. He might still have plenty to learn, but he’s already ahead of any reasonable expectations for a 24-year-old with one start under his belt.

In related news, Cousins completed six of seven passes for 52 yards and a touchdown in limited action with the starters against the Titans.

So, in the end, maybe people shouldn’t have rushed to judgment and been so hyper critical when the powers that be in Ashburn went out of their way to establish depth at football’s most vital position.

Aside from Cousins, the Redskins coaching staff will have plenty of film of other youngsters on the roster after Thursday night’s action. Some of it is encouraging – like, for example, the effort put in by cornerback Chase Minnifield who missed all of last season due to injured, but is hoping to reward Washington’s faith and patience because the team stuck with him while he was sidelined.

The same could be said about running back Roy Helu Jr., who ran with a purpose against Tennessee as he racked up 57 rushing yards on 13 carries. The Nebraska product showed solid vision and instincts as he eluded defenders while moving the chains. Of course, he’s always been solid when he’s on the field. But nagging injuries have made it difficult for the Redskins to be able to count on him for more than a game or two at a time.

There was also cornerback Richard Crawford, who appeared to make an acrobatic interception during the second half of the game … only to have it taken back by the game officials. Even without the pick, Crawford stood out as someone who came to play in the opener.

And then there were the new guys.

There was rookie safety Bacarri Rambo, who looked completely outclassed trying to stay on the same football field as Titans running back Chris Johnson during a 58-yard touchdown run. He got spun around and embarrassed while attempting to slow the speedy back in the open field.

Fellow rookie safety Phillip Thomas didn’t do anything to really stand out – good or bad – during his time in the game, and then he was knocked out of the game with shoulder and foot injuries.

Finally, there was David Amerson, who it appeared had the inside track on a possible interception, but didn’t try to make the play. Maybe he’s a little gun shy after getting burnt so often last season and was being extra cautious in his first action as a pro.

All in all, there was plenty to like and there will be even more for coaches to turn their attention to as areas of improvement between now and the start of the regular season.

Second-year offensive lineman Josh LeRibeus is a large and entertaining individual. He’s big, he’s strong and it’s no secret that the third-round draft pick was viewed as raw when he arrived.

But it’s not unreasonable to believe LeRibeus should probably be further along in his development at this point. As a general rule, an ideal outing for an offensive lineman is one where they go largely unnoticed.

Unfortunately for LeRibeus, he was hard to miss against Tennessee as he lunged at defenders and got beat to the outside more times than anyone in burgundy and gold would prefer.

The Redskins offensive line was extremely lucky in 2012, with the front five combining to miss just one start. It’s unrealistic to believe they’re going to remain that healthy again this season, and this is the time when guys like LeRibeus need to show they’re capable of stepping in if need be.

The Titans game will not be going on LeRibeus’ personal highlight reel. Hopefully he can bounce back against the Pittsburgh Steelers the next time the team takes the field.

The number of penalties the Redskins are whistled for each and every game continues to baffle and frustrate ‘Skins fans. How can a team that is disciplined enough to run the read option be so careless and undisciplined when it comes to penalties? How much more effective would the offense, defense and special teams be if they didn’t routinely shoot themselves in the foot?

These are the questions that obviously keep the Redskins coaching staff up at night. Judging by the 11 penalties Washington was called for against the Titans, this problem is likely going to continue to plague the franchise in 2013.