getting to know xavier nixon 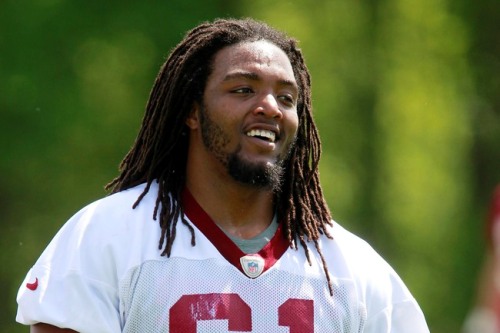 It goes without saying that when the league takes away a large chunk of your salary cap space and you trade away multiple first-round picks to land a franchise quarterback, it requires you to get a little creative to round out the rest of the roster.

That’s the approach the Washington Redskins have had to take this offseason — with $18 million less to work with than other franchises and no first rounder this year or next thanks to the Robert Griffin III trade last year.

Which explains why there were no splashy acquisitions or no marquee free agent signings to tout at Redskins Park as head coach Mike Shanahan and friends prepare for the 2013 season. Instead, if the Redskins are going to defend their NFC East title, they’re going to have to do it largely with the same roster they had last season.

One of the new faces in town who is hoping to make a strong impression during training camp is tackle Xavier Nixon, an undrafted free agent who played his college ball with the Florida Gators.

“I grew up in Fayetteville, North Carolina,” Nixon said. “Both of my parents are in the military. I didn’t do a lot of bouncing around as a kid though. I went to the University of Florida and I was a four-year starter.”

For those ‘Skins fans who don’t know much about you, how would you describe your game?

And how would you describe your time at Florida?

How did you grow as a player during your time in college?

Heading into the 2013 NFL Draft, you were talked about as someone who could possible be drafted anywhere between the third and sixth round. Obviously you were hoping to hear your name called at some point over those three days. What was going through your mind once the draft ended and you weren’t selected?

“Yeah, I was hoping, but everything happens for a reason and this was the best fit for me,” Nixon said. “In the end, everything worked out for the best. We had a couple different teams reach out, but this was clearly the best fit. It was my destiny to be here and the lord put me here. I put it all in his hands and he’s blessed me with my abilities, so now I just gotta use those tools and my work ethic to push through.”

It’s no secret that Mike Shanahan football teams love to utilize an aggressive zone-blocking scheme to keep opposing defenses on their toes. What is it about that style of play that makes you feel like this is the best fit for you?

“It fits perfectly with my athleticism and my foot speed,” he said. “With my tenacity and my ability to finish my blocks, it really is perfect. That being said, I feel like I really do need to work on everything in my game. I just came from college and this league has the best of the best, so I have to get better at everything I do.

“I just want to get better and show these coaches that I can pick up the schemes quickly,” he added.

Did you know anyone on the Redskins before you got here?

“I talked to Mo Hurt a few times,” he said. “He was also a Florida Gator, so we’d kept in touch a little bit. When we talked, he told me he loved it up here and said I’d like it too. And then there’s Jordan Reed, who is my best friend. Plus, I’ve got family in the area — in Baltimore, in Virginia, in D.C. — so this will be like a second home to me.”

Which NFL team did you root for growing up in North Carolina?

“That’s irrelevant now,” Nixon said with a smile. “That don’t matter now. I’m a Redskin for life. That’s all that matters now.”

At 6-foot-6 and 314 lbs., Nixon looks the part of an NFL lineman. It’s safe to say that Pro Bowler Trent Williams is locked in as Washington’s starting left tackle, but it’s not unreasonable to think that a strong showing from Nixon during training camp could go a long way towards staking his claim on a right tackle spot that has no clear cut starter.

Nixon’s work ethic and consistency were questioned at times during his time at Florida, which helps to explain why he went undrafted. But it appears the 22-year-old has learned from his mistakes and is willing to do whatever it takes to don the burgundy and gold for a while.

One year ago, the Redskins took a chance on an unknown commodity out of Florida by the name of Alfred Morris, and he took the league by storm. Nixon can definitely talk the talk, but now’s the time to see if he’s capable of following in Morris’ footsteps.