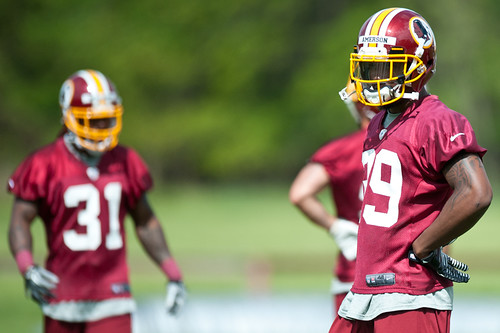 By now, fans of the Washington Redskins are intimately familiar with the newest additions to the roster – the players the team selected in the 2013 NFL Draft.

As a quick refresher, here are the seven college players the burgundy and gold brain trust opted to select during this year’s draft:

This year’s draft class clearly didn’t have the same level of name recognition of others in recent history, but that’s to be expected when a team trades away its first-round pick and is simply looking to add depth to a roster returning 21 of 22 starters from a year ago.

My personal opinion is that the Redskins targeted high-risk, high-reward players in specific areas of need – believing the coaching staff can apparently bring out the best in talented, but flawed players while helping these seven players overcome some of the deficiencies that could have possibly scared off other teams.

Take, for example, Washington’s top pick – defensive back David Amerson, out of North Carolina State. Depending on your perspective, the ‘Skins landed one of the top ball-hawking defensive backs in the country … or a burnt piece of toast who lacks discipline and tries too hard to make the highlight reel.

While the Redskins thought enough of the 21-year-old to use their top pick on him, NFL Network’s Mike Mayock ranked Amerson as the 99th best prospect on his big board in the days leading up to the draft.

Some scouts and talent evaluators compare Amerson to another Redskins cornerback – DeAngelo Hall – and they don’t exactly mean it as a compliment.

“I think he was trying to make a big play every snap instead of playing his assignment,” Mayock said.

Sounds familiar? And Mayock wasn’t alone in his frank assessment of Amerson.

“They need help all over the secondary, and David Amerson was a slight reach for me in Round 2, but at least offers depth,” said ESPN’s Mel Kiper. “He was exceptional in 2011, but had some ugly games in 2012, so if he cleans up his play they get a good player.”

The beauty, as they say, is clearly in the eye of the beholder, when it comes to prospects like Amerson.

Of course, it’s one thing for talking heads to rush to over-analyze college players. It’s another thing entirely though when football fans are fortunate enough to catch a glimpse behind the curtain of an actual NFL team’s draft room.

The folks over Bloggingtheboys.com, a website dedicated to the Dallas Cowboys, have compiled screen shots of videos featuring Cowboys owner Jerry Jones to amazingly reconstruct Dallas’ 2013 draft board.

While much of the talk will center around the Cowboys believing the 16th overall pick, Florida State’s E.J. Manuel, was only worthy of a fourth-round grade,* this compilation also gives ‘Skins fans a rare opportunity to see what their biggest rival thinks of the new guys on the block.

*For what it’s worth, quarterbacks Ryan Nassib, Matt Barkley and Geno Smith were each graded ahead of Manuel, which each earning a second-round grade by Dallas.

The first thing that stands out to me is that, out of Washington’s seven draft pick in 2013, only three players are even listed on Dallas’ draft board – with Amerson, Thomas and Jenkins making the cut.

That means, of course, that Reed, Thompson, Rambo and Jamison were not.

Here is one possible explanation, courtesy once again of Bloggingtheboys.com, for why these four gentlemen were not deemed to be draft worthy by Dallas:

We had heard before the draft that the Cowboys wanted to include only players on the board that they were sure they wanted, so they were working to develop a leaner, more “pure” board. This board has 132 players on it, which is actually pretty close to the one that leaked in 2010, which had 129 players.

The website also lists a few other possible reasons why players might not have made the cut, including: injury or character scratches, bad scheme fits and player size.

A guy like Thompson could definitely be viewed as injury prone and Rambo has definitely had his share of off-the-field controversy, so that might explain why they’re missing in action. But the interesting thing to me is that all three Redskins players who are listed – Amerson, Thomas and Jenkins – were considered fourth rounders by the Cowboys.

Interestingly enough, it seems as if Jenkins (who Dallas listed as a defensive end) was the highest rated of the trio, followed by Thomas and then Amerson. Jenkins was deemed the 81st-best prospect in Jerry’s World, with Thomas ranked 85th and Amerson was 86th.

Also worth noting: Dallas viewed Jenkins as the 11th-best defensive end in the draft. Thomas was their seventh-best safety and Amerson was their 11th-best cornerback available.

What does all of this mean? Honestly, not much. But like I said earlier, teams are normally extremely secretive when it comes to letting outsiders know how they truly feel about … well … anything.

Sure, you’ll hear seemingly every single NFL general manager say something along the lines of “We were lucky to land [insert player’s name here]. We had him graded as a first-round pick.” But that’s typically just lip service to try and over-inflate their roster, talent evaluators, etc.

This slip up by the Cowboys provides ‘Skins fans with the unlikely opportunity to truly peek behind enemy lines while also giving seven first-year players possible bulletin board material the next time the Redskins travel to Dallas.