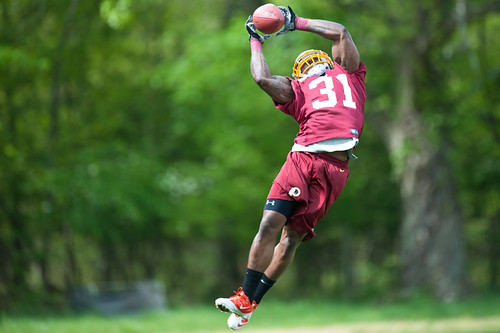 One year ago, the Washington Redskins held a rookie camp that represented the debut of Heisman Trophy winning quarterback Robert Griffin III.

Considering how many decades it had been since the Redskins had anything that remotely resembled a franchise quarterback on the roster, the entire D.C. metro area was eager to see RGIII don the burgundy and gold for the first time.

Needless to say, things are much more subdued in 2013.

With no first-round pick this season, Washington simply aimed to add depth to the roster during the ’13 NFL Draft. Those seven draft picks, as well as 12 undrafted free agents and 48 players in town on a tryout basis participated in the team’s three-day rookie camp.

Consider the Redskins are the reigning NFC East champions, roster spots are going to be hard to come by for the majority of these hopefuls.

It’s an introduction to our system, both offensively and defensively,” said head coach Mike Shanahan. “We don’t work on special teams in this camp, but we will in our OTAs. But they get a feel for what we’re trying to do. We get a chance to take a look at them, what type of athletes they are, what type of quickness and speed. And that was very impressive to see our draft choices out there and to see their size and their quickness and their speed and things we were hoping for. Their ball skills were very evident out there over the last few days. So it was a good practice.”

For those who are interested, I was out at Redskins Park covering the rookie camp. Click here for the full gallery of photos from the 2013 rookie camp.