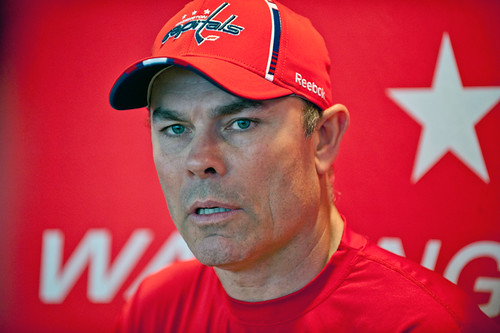 One of the ways the 50-year-old coach was able to earn his player’s trust early was by holding everyone to the same standard. Whether he’s dealing with the team’s highest-paid player or a career minor leaguer, Oates has treated each and every player with the same level of respect.

Oates has an open-door policy and encourages each and every player to see him if something’s on their mind. He’s also meticulous in his preparation — consistently breaking down film of all of his players on a regular basis to show them what they’re doing well and which areas they need to improve upon.

When role players feel like they’re just as vital to a team’s success as the face of the franchise, they’re going to bend over backwards to do anything and everything they can to help their team emerge victorious.

Here’s a fun exercise you can try at home during the next Caps game: look at Oates behind the bench during any game and try to guess the score simply by reading his body language. The man is so even keel, it’s virtually impossible to get a read on the game simply by watching him.

Along the same lines, the players know what they’re getting each and every day they show up for work. While that doesn’t sound like much, the value of that trait simply cannot be overstated.

When the Capitals were 2-8-1 and left for dead, Oates didn’t panic and his faith in his system and these players never wavered. Now compare that to last season, when Dale Hunter carried on like a moody girlfriend — waking up on the wrong side of the bed and deciding to give one of his players the silent treatment for the next month for no rhyme or reason.

Which of those situations would you rather deal with in your work environment? Yeah, me too.

In related news, the Capitals were able to work through their early-season struggles and reward their coach for his patience by finishing the season with an impressive 25-10-2 record.

Bruce Boudreau excelled at offense. Dale Hunter taught the Capitals how to play defense. In the eyes of the man who hired him, Oates is the perfect combination of the franchise’s previous two coaches.

“Coaches have different approaches,” said general manager George McPhee. There’s a certain way that I think we should do things that is sort of the middle ground with what the previous two coaches did. I think we’ve had some real good coaches here. Bruce obviously won a Coach of the Year award. Dale Hunter is one of the best coaches to ever come out of junior and could have done a real good job at this level for a long time.

“I think we’ve got a blend of the two previous coaches,” he added.

No one in this town had ever heard of guys like Steve Oleksy and/or Jack Hillen before this season, and yet, each has been a valuable contributor to the franchise’s success in 2013. The same can be said of the decision to put Marcus Johansson on the team’s top line, the decision to re-unite Alex Ovechkin with Nicklas Backstrom and countless other decisions Oates has made in Year One.

Much like when he had the puck on his stick back in the day, Oates continues to have the magic touch when it comes to which players to turn to and which situations to put them in.

8. Adam Oates is a miracle worker.

Okay, okay … perhaps I’m overstating things with this one. Perhaps the more accurate statement would be:

8. Adam Oates is able to think outside of the box.

The entire hockey-loving world believed Ovechkin was done. Everyone saw his production rapidly declining, but for two seasons no one could do anything to stop it. Enter Oates. With a quiet confidence, he set out to rehabilitate The Great 8’s game — starting with a switch from left wing to the right side that was designed to force Ovechkin out of his comfort zone and encourage him to develop new ways of attacking opposing defenses.

When faced with the same problem, Boudreau did nothing. Hunter opted to screw around with Ovechkin’s minutes — effectively marginalizing his team’s best player by relegating the superstar to ice time usually reserved for fourth-liners.

Again, Oates’ perspective wasn’t earth shattering, but it worked. And when Ovechkin appeared to focus too heavily on trying to score goals, Oates encouraged him to do the little things — such as backchecking and staying true to the system in place. If you’re doing the right things and you’re in the right place, Oates firmly believed Ovechkin’s production would return to form. And ever since the captain bought in, the results have been undeniable.

Even after his slow start, Ovechkin once again led the NHL in scoring and is once again keeping opposing defenses up at night trying to scheme ways to slow down the Russian Machine.

As an assistant coach in New Jersey last season, Oates helped the Devils to an unlikely Stanley Cup Finals appearance thanks, largely, to a highly-effective powerplay unit. It’s also worth nothing that Oates’ other significant achieving during his time with the Devils was helping a ridiculously-talented Russian sniper (Ilya Kovalchuk) regain his scoring touch by switching him from the left wing to the right side.

Any of that sound familiar?

Oh, and for the record, life without Oates hasn’t been nearly as kind to Kovalchuk — who just last week said, “This was probably the worst season of my career.”

Admit it, there’s something inherently cool about a coach who looks like an actor best known for playing a mobster or a tough guy.