why are caps fans so opposed to the martin erat deal? 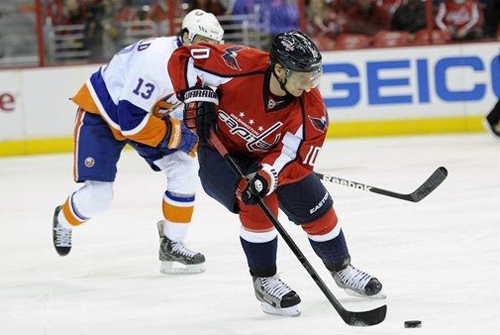 A crazy thing happened this week, when it was announced that the Washington Capitals had made a last-minute trade with the Nashville Predators — Caps fans, almost universally, were irate.

But why was everyone in town so cranky about the move? After all, Erat has been one of Nashville’s most consistent and productive players for more than a decade. By all accounts he’s a hard working, blue collar kind of player who can help a team in myriad ways.

It’s also worth noting he recorded a career-high 58 points (19 goals, 39 assists) last season for Nashville and has eclipsed the 50-point plateau in five of the last six seasons. The three-time 20-goal scorer has represented the Czech Republic in the World Championships (three times), World Junior Championships (twice) and the Winter Olympic Games in 2006 and 2010.

Erat is a top six forward who logs heavy minutes in all three phases of the game (powerplay, penalty kill and even strength). He was well respected by management, his fellow players and Predator fans in Nashville (he was made an assistant captain this season). And let’s not forget, the 31-year-old was a seventh-round draft pick who put in the blood, sweat and tears to establish himself as one of the best players to ever for the Preds.

On paper, this guy plays hockey the right way and does everything that’s ever asked of him without issue.

It’s not a stretch to say Erat would be a much bigger deal if he played in a larger market or had a more recognizable last name, so maybe that’s one of the primary reasons for the negative reaction — Caps fans just don’t see much of Nashville, so Erat is a bit of an unknown even though he’s been in the NHL since 1999.

While that may play a part in the backlash though, there’s more to this story. For my money, the public outrage has much more to do with who is leaving the organization as opposed to the new guy in town.

Let’s turn to ESPN’s Pierre LeBrun, who shed some light on management’s thought process at the trade deadline.

Judging by social media, Caps fans were none too pleased with seeing the young Swedish center shipped out for Erat and prospect Michael Latta.

And yes, perhaps GM George McPhee could have gotten more had he waited until the summer to shop Forsberg fully to the league. You see, I believe the Caps were going to trade Forsberg at some point no matter what, internally souring on the prospect, a player they no longer viewed as a top center in the making.

Scouts I’ve spoken with have mixed opinions. Some still view him as a top center in the making, at least a No. 2, but others are concerned by his foot speed. The latter is what concerned Washington.

We shall see who has the last word here. Forsberg may make the Caps rue the day they dealt him to Nashville. For that, we’ll have to circle back here in three to four years to rekindle this conversation.

In the meantime, here’s what happened. McPhee wasn’t going into the deadline thinking he would do anything. But Poile phoned him Tuesday and told him that Erat was available and that the Caps were one of the teams to which the player would waive his no-trade clause. From there, the trade conversation took shape, especially when Poile found out Forsberg was on the table.

Most of the reaction around the hockey world has been to pile on Washington in this deal, but I’m not so sure it’s such a bad trade. Certainly, I believe the Preds made the best of their situation with a player wanting out and getting a highly rated prospect in return. Poile did a great job.

This is the first anyone has heard about any concerns the Capitals’ braintrust might have about Forsberg. Until this week, all anyone had ever heard about the 18-year-old was that he’s considered an elite prospect who Washington was lucky to land in the ’12 draft and who was universally viewed as the second-best prospect in the pipeline.

Now, all of the sudden, Forberg’s foot speed might be in question and the Swede might be more sizzle than steak. Was this simply spin control by GMGM to try and persuade public opinion in the team’s favor or did the front office truly believe Forsberg was never going to live up to the hype?

That’s something we’ll never really know. But at the end of the day, I truly believe the primary reason so many Caps fans were aghast over the trade is because of what Forsberg represented — hope.

From the moment Capitals owner Ted Leonsis and McPhee went public with “The Plan,” Caps fans were told to be patient because the organization was going to blow everything up and rebuild the franchise from the ground up to make the team truly competitive for years to come.

Enter the Young Guns, who ushered in the “Rock the Red” era in Washington and made hockey fun for casual fans. Alex Ovechkin, Nicklas Backstrom, Mike Green and others put the Capitals on the map and made the Verizon Center a desirable destination.

And then it all ended in a flash.

The Caps no longer scored goals with ease. The team’s best players were suddenly known for their contracts more than their on-ice production. Seemingly overnight, the question changed from “When will the Capitals win their first-ever Stanley Cup?” to “What the hell happened to Washington?”

These days, does anyone truly believe the Caps have what it takes to win it all this season or the next? Of course not. For a season and a half now, Washington has been nothing more than mediocre on good days and has been downright dreadful on others.

Sure, the players seem to finally be playing sound hockey under Adam Oates, but a quick check of standings shows the Capitals have still have more total losses (19) than wins (18) in 2013.

So while it’s nice for guys like McPhee to pretend the Caps are simply a player or two away from winning a championship, it’s not accurate. If this move was made by the Chicago Blackhawks, the Pittsburgh Penguins or the Boston Bruins, then sure, it’d be a no brainer. But the Capitals are no longer considered the cream of the crop in the NHL, which is why this trade felt like a stomach punch to so many local fans.

It’s as if Caps fans had universally said, “Okay, maybe the window has closed on the current version of the Caps, but at least we’ve got reinforcements on the way.” Simply having top-tier prospects like Evgeny Kuznetsov and Forsberg in the system gave people reason to cling onto hope that better days are once again on the way.

By giving away Forsberg though, management has taken that luxury away. Fans must now resort to once again praying like hell the current version of the Capitals is capable of achieving anything remotely special, and that’s a tough sell considering just how much has changed over the last two and a half seasons.

Maybe Erat is exactly what the doctor ordered for this franchise. Maybe he’s what the team has been missing all along and the Capitals are a juggernaut in disguise. Maybe this is the year a Washington-based sports team finally accomplishes something noteworthy and positive in the postseason.

If that’s the case, the criticism by Caps fans will surely vanish in a heartbeat. But if that’s not how this plays out and all that’s left is a roster loaded with players whose best days are behind them, then this deal will continue to be a lightning rod for controversy in our nation’s capital.