george mcphee drops a bombshell at the deadline 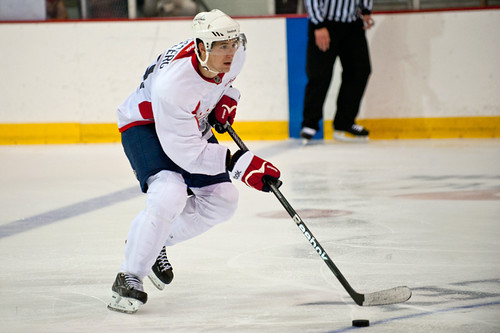 I think we can all agree on one thing — Washington Capitals general manager George McPhee made a bold move. I’m just not sure how many people believe it was a good move.

Nearly two hours after the NHL trade deadline had passed, the Capitals finally announced they had acquired winger Martin Erat and minor leaguer Michael Latta from the Nashville Predators in exchange for highly-touted forward Filip Forsberg, the team’s first-round pick (11th overall) in 2012.

Look, this post has very little to do with Erat, who by all accounts is a productive top six forward that has put together a respectable 12-year career. For all any of us know, coach Adam Oates could have been flipping tables and breaking shit demanding the front office land the Trebic, Czechoslovakia native because the Hall of Famer firmly believes he’s the missing piece in Washington. I’ll get to him another day.

Of more concern for me personally at the moment, is what McPhee was willing to give away in this deal and what it means for the franchise moving forward.

Because the Capitals have been in “win-now” mode for a while, there really isn’t much in the way of prospects in the pipeline.

There’s Evgeny Kuznetsov, the amazingly gifted forward who seems in no real hurry to leave Russia.

There’s Tom Wilson, the power forward who still seems more than a year or two away from being ready to compete at the NHL level.

There’s Philipp Grubauer, the goaltending prospect who is nipping at the heels of Braden Holtby and Neuvirth.

There’s defenseman Nate Schmidt, who the Caps signed yesterday and who instantly became their top defensive player in the system.

And then there’s Forsberg. Or, more accurately, there was Forsberg.

Think back to last June, when the Capitals were downright giddy after stealing Forsberg with the 11th overall pick in the ’12 NHL Draft — even though he was widely considered one of the top two or three players in the entire class.

“At the table the scouts were unanimous — ‘We have to take this guy, he’s a fantastic player,’” McPhee said at the time. “I tried to give them other options to play devil’s advocate with it but it was an easy one.

Oh by the way, Forsberg was the NHL Central Scouting’s highest-rated European forward heading into the 2012 draft and he’s already represented Team Sweden at the World Junior tournament twice.

And yet, before ever playing in a single game for the franchise, Forsberg has been moved. And he might not be the only causality of this transaction by the time it’s all said and done.

During the instant analysis portion of the evening, more than a few talking heads claimed the Capitals were able to “land a proven veteran without subtracting anything from the roster.” While that is technically true today, that might not be the case tomorrow.

You see, Erat has two years left on his deal at $4.5 million per season. So it should go without saying that the acquisition has a larger impact on how the roster can and will be shaped next season in beyond.

With the addition of the veteran forward, the Capitals now have 17 players under contract next season for roughly $54 million. It should be noted, the salary cap for 2013-14 is $64.3 million, which leaves the organization just under $10 million to round out the rest of the roster.

Clearly some of the players suiting up for Washington at the moment will be elsewhere this time next year — and in all likelihood, this trade signals the beginning of the end for Ribeiro, the 33-year-old who is hoping like hell to cash in one final time before hanging up his skates.

It’s no secret the team has been trying to sign Ribeiro to a new three-year deal, but the two sides have been unable to come to an agreement to this point. Now, after adding Erat’s salary to the mix, I’m not sure there’s enough money to go around for Ribeiro unless the team is willing to move Mike Green ($6 million per year), Joel Ward ($3 million per), Jeff Schultz ($2.75 million per) or sacrifice someone like Alzner or Johansson.

So now, there’s a real chance that Ribeiro will leave town after just one season with the salary cap strapped Capitals getting nothing in return. And obviously, there’s a solid chance Forsberg ends up being a stud (he is currently ranked as the 21st best team-affiliated prospect according to The Hockey News). Fair or unfair, this is the baggage Erat is now saddled with.

We’re talking about a guy who gets paid the same annual salary as Brooks Laich (with slightly better production than Laich each year) now being asked to fill in for a highly-anticipated prospect and, quite possibly, a respected veteran who has been Washington’s best player in 2013.

That’s why I don’t see this ending well for Erat and the Capitals. Nothing against the guy — he just happened to show up at the wrong time under less-than-ideal circumstances. Hopefully he’s able to come in and make a name for himself with the Capitals as opposed to being the guy local sports fans begrudge because of what he cost the franchise to acquire.