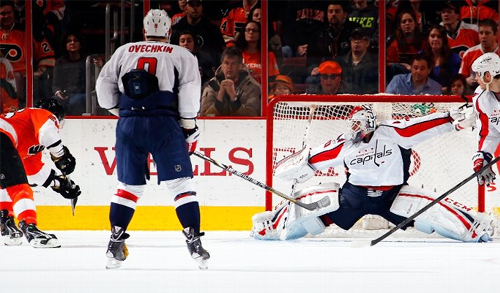 The Washington Capitals were just nine seconds away from being .500 for the first time this season … and inexplicably let it slip away in heartbreaking fashion.

Roughly 24 hours after rallying to steal two points from the Buffalo Sabres by tying the game in the final minute and then earning a 4-3 shootout victory, the Caps allowed the script to be flipped by blowing a two-goal, third-period lead — punctuated with a game-tying goal by Philadelphia’s Kimmo Timonen with 9.5 seconds to play — and then blowing it in overtime, 5-4.

Had Washington lasted just 10 more seconds, everything would be great in our nation’s capital on a dreary Monday morning as the Capitals head into April. But because nothing is ever easy with this team, the Caps played just well enough over the weekend to get everyone’s hopes up and then imploded in spectacular fashion.

“We got a point there, but we obviously want two there,” said coach Adam Oates. “We let it get away.”

What happens next, boys and girls, is anyone’s guess. That’s because, with just 13 games remaining on the schedule, the Capitals have had a losing record every single day of the 2013 season. And yet, they still remain only one point out of the eighth and final playoff spot in the Eastern Conference.

Realistically, this isn’t a playoff-caliber team. Not this season, at least. But they’ve still almost managed to back their way into the postseason without actually playing anything close to a consistent brand of hockey. That’s how watered down the playoff hunt is this season.

Despite scoring two powerplay goals in a 26-second span to take a commanding 4-2 lead against an injury-riddled Flyers squad, the Capitals squandered a chance to enter the final month of the season with momentum.

Now the Caps have one game left to play before the NHL’s trade deadline. Should they be buyers or sellers? Is there a move or two to be made to bolster this roster and get them over the hump? Or should general manager George McPhee realize that this team, as presently constructed, is incapable of winning the Stanley Cup and trade away any players that don’t fit Oates’ brand of hockey?

Well, regardless of what the franchise should do, it’s a safe bet GMGM won’t admit defeat and start dumping overpaid/under-performing players. With the exception of “The Plan,” McPhee has never really been inclined to sell at the deadline.

Typically, he’s very aggressive this time of year — willing to rent a veteran player or two for the stretch run rather than deal away talent from his own organization. He’s always been able to convince himself (and the rest of this hockey-loving town) that his team is only a piece or two away from greatness and acts accordingly this time of year.

That’s why I still believe the chances of free-agent-to-be Mike Ribeiro being dealt this week are slim. McPhee sees the Capitals as a playoff team. He has to. And he obviously knows that guys like Alex Ovechkin, Nicklas Backstrom and Mike Green aren’t getting any younger, so he’s going to continue to operate with a sense of urgency.

So don’t think for a second that McPhee is magically going to have a change of heart this time around and start sending players like Ribeiro elsewhere, when it’s ultimately his job on the line. There’s no real reason to believe GMGM is on the hot seat — especially when owner Ted Leonsis continues to employ Ernie Grunfeld to run his inept basketball franchise — but that doesn’t mean McPhee is eager to admit how flawed this team is.

Basically what I’m trying to say is, anyone waiting for the Capitals to make a flurry of moves between now and Wednesday’s deadline is likely to be as disappointed as any hockey fan waiting for this franchise to turn the corner in 2013.