on mike ribeiro and his contract-year performance 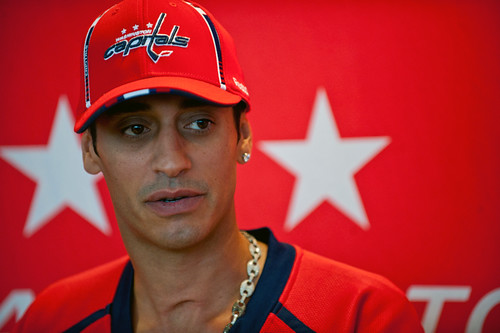 With the NHL trade deadline less than a week away, the Washington Capitals have exactly three games left to decide what to do with second-line center Mike Ribeiro.

Okay, first and foremost, the front office needs to decide if this team is actually capable of making the playoffs this season. And while general manager George McPhee is at it, it probably wouldn’t hurt to re-evaluate whether or not the franchise’s core players — Alex Ovechkin, Nicklas Backstrom and Mike Green — give Washington the best chance to ever hoist the Stanley Cup.

But realistically, that’s not something he’s likely to address in the next six days. So let’s stick with the first two questions — what to do about Ribeiro and can the Caps make the playoffs?

McPhee has three choices, which are: trade him, re-sign him or do nothing and risk losing him for nothing. Obviously the third option is the least appealing. Once Ribeiro hits the open market there is little to no reason to believe the Capitals would be able to retain his services.

If it becomes clear that the franchise and the player are not going to be able to agree on a new contract, then the front office has to ship him off for prospects and/or draft picks. I mean, if you’re going to lose the guy anyway, then at least get something in return for the guy. On that front, rumor has it both Chicago and Vancouver are interested in acquiring Ribeiro if/when Washington opts to send him packing.

It’s clear that conversations are ongoing between GMGM and Ribeiro’s representatives — as evident by the report that the 12-year veteran rejected the team’s offer for a new three-year deal.

Ribeiro has made it known he’d prefer to sign a long-term deal in the neighborhood of five years for something like $25 million or so, and why shouldn’t he? At 33, this is probably his last real chance to land a bigger contract. But I still think (or more accurately hope) the Capitals could lock him up for three years for between $5-6 million a season and everyone walks away happy.

While I believe the Capitals need Ribeiro in order to give the franchise more than one line worth game-planning for, some skeptics look at Ribeiro’s stats this season — he currently ranks fourth in the NHL in powerplay assists, fifth in assists and seventh in points — and scream, “It’s a contract year! The guy only shows up when it’s time to get paid!”

Which brings me to a very interesting write-up by a Dallas Stars blog titled “The Key to Mike Ribeiro’s Rebound Season in Washington.”

After watching Ribeiro play in Dallas for six seasons, Stars fans are naturally paying close attention to the veteran’s bounce-back season. One year ago, Ribeiro finished tied for 44th in points and now that’s he’s moved to our nation’s capital, he’s suddenly out-producing players such as Thomas Vanek, Alex Ovechkin, Henrik Zetterberg and both Sedin twins.

What’s really going on? Is this one of the biggest a cases of a contract-year player suddenly finding his motivation or did the Montreal native just happen to land in the best possible situation?

Here’s what the folks down in Texas were able to figure out after taking a deeper look into the numbers:

It would be an understatement to say that I have been a bit skeptical of all of the praise that has been sent Ribeiro’s way over the course of this shortened season. How is he doing it? What makes this season so much different for Ribeiro compared to his last year as a Dallas Star?

All three rates are essentially the same with one notable difference: Ribeiro was actually more productive at even strength last season than this season. Small sample size questions obviously come into play, but at even strength Ribeiro was arguably better with the Stars in 2012 than the Capitals in 2013

Part of that production difference could come from usage. The Stars using Ribeiro in easier situations would boost his 2012 production.

The fancy stats seem to indicate nothing out of the ordinary is happening with Ribeiro during even-strength situations. What about on the man advantage?

So, before we resort to chalking his increased production up to sorcery let’s take a look at Ribeiro’s power play production.

The shooting percentage is a little high, so a little regression there would make sense, but the Capitals power play is a perfect fit for what Ribeiro does. He is allowed to camp out on the side boards and make plays. The forward playing on the other side boards is none other than Alex Ovechkin. It certainly hasn’t hurt.

This isn’t to say that Ribeiro hasn’t fit in well with the Capitals. He obviously has, but he isn’t doing anything out of the ordinary Mike Ribeiro playbook. He has been himself at even strength, and his production has seen a huge boost from the significantly better Capitals power play which gets more opportunities than the 2012 Stars did. His added production this season has no doubt added some zeros to his upcoming paycheck, but the “rebirth of Ribeiro” is a bit overblown.

Their verdict? Aside from his ridiculous 26.8 shooting percentage, this season isn’t really out of the ordinary for Ribeiro. And look, no one really believes the guy is going to score on one out of every four shots he takes for the rest of his career.

Bigger picture, the fans who followed Ribeiro for the last six seasons feel like he’s benefiting from a “significantly better powerplay” but is otherwise the same player they rooted for in Dallas.

So if the Capitals truly feel they can make a playoff push and both sides are able to agree upon a contract that works for everyone involved, it doesn’t sound like having Ribeiro around for a little while longer is a bad idea.