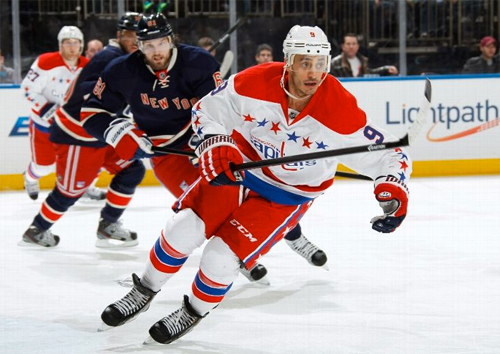 There is only one topic of conversation among fans of the Washington Capitals — what should the front office do with center Mike Ribeiro?

It’s no secret I feel like general manager George McPhee should do everything within reason to try and retain the talent playmaker, but there are plenty of fans who are opposed to that school of thought.

I see the first halfway decent center on the roster not named Nicklas Backstrom since Sergei Fedorov hung up his skates. I see a guy who plays a vital role on the powerplay and gives opponents a reason to pay attention to more than just Washington’s top line.

Others though, feel Ribeiro’s age and contract demands are more than enough reason to take the best deal available prior to the trade deadline.

With all of that in mind, I reached out to some of the best individuals and blogs on the local hockey beat and here’s what they each had to say.

1. With the trade deadline rapidly approaching, what should the Washington Capitals do about free-agent-to-be Mike Ribeiro?

Trade him as soon as possible. Cup contending general managers are already collecting the players they think they need to get the edge, and I’m wondering if April 5 might be a bit too late for a deal. Knowing that second-line center is a valuable position and some teams (Anaheim for example) are eager to grab one, Ribeiro is looking like a super duper valuable bargaining chip. Plus, looking at the deals guys like Alex Semin are getting, I’m hoping the Caps realize how much it’ll cost to keep him around. It’ll never happen — but Anaheim’s 2014 first-round draft pick would be a nice get.

Next year’s salary cap crunch, realignment and the impending Olympic circus are all factors that to me do not suggest runaway success for the Washington Capitals in 2013-2014, regardless of who is manning the middle of the second line. Trade Ribeiro for picks and quality prospects, and maybe start assembling a true Oatesian roster by signing a couple of good players who will inevitably be squeezed out by the other monster deals being announced now. Build (but not rebuild) to make some noise in 2014-2015.

Trade him. This team won’t win the Stanley Cup and the odds of them re-signing him in the offseason are remote. You need to get the most value back you can now and a lot of teams need a top-six center. They got nothing for Semin. They need to get something for Ribeiro.

What to do with Mike Ribeiro has become a polarizing issue around these parts. Those who want him traded are afraid of signing a 33-year-old to a long-term extension and/or having him walk away for nothing this summer, while those who want to re-sign him are afraid that the revolving door that is the second-line center position will continue to spin if he leaves. Truth be told, both are valid arguments.

But since you’re asking for my opinion (for some reason), I think the Capitals would be remiss not to re-sign Ribeiro, who has without a doubt been their best player this season. The statistics speak for themselves: he’s in the top 10 in points; his 17 power-play points are second-most in the NHL; only Sidney Crosby, Steven Stamkos and Ryan Getzlaf have more multi-point games than Ribeiro’s 11; he’s on pace for a career year in an 82-game season. To be blunt, he’s been a godsend.

Not only that, but Braden Holtby said Monday that Ribeiro has been a calming influence and source of guidance for a Capitals team that has had its fair share of struggles this season. Such contributions cannot be overlooked.

My opinion is public: the Caps should try to re-sign Ribeiro. I went into great detail in the post on my site, but the Caps have only two options: trade Ribeiro before the April 3 deadline in what should be a sellers market, or sign him to a long-term extension. Allowing him to play through the end of his contract, hit the open market, and sign elsewhere for no compensation would be a dereliction of duty. With the way the roster is constructed, the Caps have little option but to play their hand while Ovechkin, Backstrom and Brouwer are in the prime of their careers. A “rebuild” at this stage would waste the prime of their best players in mediocrity.

It’s important to remember that the Capitals essentially rented Mike Ribeiro for this season when they acquired him from Dallas at the NHL Draft last June, sending a second-rounder and Cody Eakin to the Dallas Stars for the final year of his contract. Certainly, Ribeiro has been a solid player in Washington’s system, and the second-line center the Capitals have essentially lacked for the past few seasons.

With the Capitals now approaching this year’s trade deadline, should they opt to trade him away, they most likely get a close equivalent to what they sent to the Stars last June, making the whole exercise a wash. Perhaps they get a first-rounder and a mid-level prospect in return, but after the Brendan Morrow trade by Dallas Sunday, the return for rental players isn’t quite what it used to be.

If the Capitals have a legitimate shot at the playoffs — and the next four games will dictate if they do or not — I think with the state of the Eastern Conference and Washington playing much better hockey since the disastrous 2-8-1 start — they should stand pat and let it ride.

If they can resign Ribeiro for a reasonable price, great, if they don’t, they essentially have already paid the second-rounder and Eakin price tag for the rental. For comparison, it’s similar to the price the Caps paid to rent Jason Arnott in the 2011 playoff run, and while they risk losing him outright this summer, should the Caps have a shot to make it in the postseason with some very beatable clubs, really no need to shut down the season for perhaps a pick that wouldn’t make any sort of impact until later in the decade.

The Caps recent resurgence makes it difficult to trade their most productive player, but with Alex Ovechkin, Nicklas Backstrom, Brooks Laich and John Carlson all locked into long-term deals and 12 players set to hit free agency, signing Ribeiro to a long-term contract might not be in the cards.

Ribeiro is averaging over a point per game this season, but that’s not in line with his career numbers (0.77 points per game). He’s also 33 and is reported to be seeking a five-year deal, a sizable commitment to a guy who is more than likely past his prime.

So as scintillating as Ribeiro has been this season, the Caps should probably look to sell high and make a deal if they can find a trade partner willing to sacrifice top shelf prospects.

As we stand now, they have no choice but to hold on to Ribeiro and try to re-sign him. No way can you trade him after momentum built in Winnipeg and New York.

They should absolutely make every attempt to re-sign. He’s the Top 6 center and playmaker they’ve been looking for forever to swap around with Backstrom. It’s rumored he wants a multi-year deal with Washington, and if he wants to stay in DC, the way he’s played, I’m sure the Capitals wouldn’t complain and they’ll make an offer.

[Editor’s note: Naturally, we’re split down the middle. Why wouldn’t we be?]

2. Okay, now that we’ve gotten that out of the way, what will they do?

Surely not what I said. I wouldn’t be surprised if the Caps hold on to Ribs at the deadline then trade his rights away for a song right before free agency. Sigh. I would be disappointed though.

Keep him and lose him for nothing in the offseason. Can’t see this team, especially George McPhee, throwing in the towel … ever.

To be perfectly honest with you, I have absolutely no idea. If I had to guess, I would suspect that the Capitals will not risk losing Ribeiro for nothing by letting him walk this summer. They will either lock him up before season’s end or trade him by next Wednesday. But that’s as far as I can really go. Very helpful, I know, but if I knew anything about hockey, I’d be in it.

I don’t see George McPhee trading Ribeiro if the Caps are within hailing distance of the playoffs, and with the sweep of division leader Winnipeg and the win over the Rangers Sunday, the Caps have re-inserted themselves into the postseason discussion.

If they don’t trade him, it’ll be real tough to allow him to walk at the end of the year with no compensation. After everything else McPhee has done with this franchise, what he does with Ribeiro could very well be his defining moment.

I suspect barring a major collapse in the next four games — all against teams they are fighting for their playoff lives with — the Capitals will at least stand pat by the deadline. The thinking was a rental of Ribeiro last June, and don’t imagine they will shop him off unless the team has little chance to get in the postseason.

Of course, with Ribeiro’s strong season, there will be more of a push to keep him in town, and you may see the Capitals step in with an offer sooner than later.

He is a good fit in Adam Oates’ system, has been the most consistent player this season in Washington and has been one of the reason the Capitals’ power play has been the league’s best so far. Selling him for a pick certainly would cause problems for this year’s playoff chances, and it’s doubtful barring a four-game slump the Caps will deal him away.

Trading Ribeiro would probably indicate McPhee is preparing to reload rather than compete for the eighth seed in the East this season. Since McPhee has never shown much of an inclination to back off the current blueprint, it seems logical the Caps will go for broke, keep Ribeiro and then make an offseason bid to retain his services.

At the deadline, I would love to see the Caps add a little help on the wing. Wolski has been in the dog-house for much of the year. I would say some defensive help too, but Kundratek is coming back and Erskine was playing well before his injury.

I would expect, if they do offer him a contract, that it would be around 3 years, $5 mil per.

[Editor’s note: While many believe the Caps should trade Ribeiro, it appears that everyone is convinced GMGM won’t actually do so.]

Bonus question: If the Caps re-sign Ribeiro, what will the deal look like?

A three-year deal worth $6 million per year.

My minimum would be three years for $15 million. My ceiling would be four years for $21-22 million.

A three to four year deal worth $5-6 million a season.

Somewhere along the lines of a five-year, $25-30 million deal.

[Editor’s note: And as for my best guess, I believe the Capitals will re-sign Ribeiro for roughly three years at $17 million. Sure, it’s tempting to believe the team could fetch a high draft pick and a decent prospect for him, but at the end of the day, I believe he’s too good of a fit here in Washington to send him packing after just one season.

And finally, thank you to each of the individuals who participated in this edition of the Caps Roundtable. Cheers.]