take it to the bank, the capitals will make the playoffs 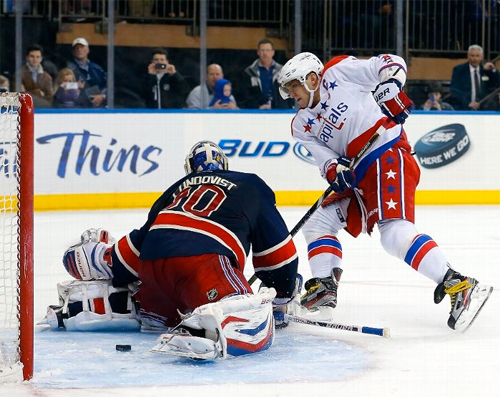 The 2013 Washington Capitals will make the postseason. There, I said it.

Now look, I know that’s an odd thing to say about a team that hasn’t spent a single day above .500 this entire season, but I’m telling you — these Caps are playoff bound.

Something has clicked over the last five games — with Washington winning four of five while outscoring opponents 19-8 — and suddenly the Capitals are a team playing solid and respectable hockey. The decision making has been better. The passing has been sharper. And, best of all, the team is scoring goals in bunches.

That, of course, starts with captain Alex Ovechkin, who has absolutely found his mojo during the team’s recent hot streak. Ovechkin has six goals and three assists for nine points during the last five games and people are no longer talking about whether or not the switch from left wing to the right side is a bad move.

Even with his close-cropped haircut, The Great 8 has looked like one of the league’s most lethal snipers while scoring in five-straight games and would now be on pace to score 41 goals over the course of an 82-game season.

And why is Ovechkin lighting the lamp with such frequency these days? One of the biggest reasons has been coach Adam Oates’ decision to reunite the Capitals captain with center Nicklas Backstrom on the team’s top line.

It’s no secret that Ovechkin and Backstrom have great chemistry together on the ice, but it’s been difficult for Caps coaches to play these two elite forward together very often because it essentially means they’re putting all of their eggs in one basket. Well, that used to be the case.

This season though, the Capitals have enjoyed the play of a second top-tier center — Mike Ribeiro — which is something Washington has lacked since Sergei Fedorov decided to hang up his skates after the 2008-09 season.

Ribeiro though, has been Washington’s best player all season long. He’s one of the primary reasons why the Capitals’ powerplay ranks first in the league and he’s also a big factor in Ovechkin’s recent success as well. Why?

Because he’s given Oates options. The first-year coach can now pair Ovechkin with Ribeiro or with Backstrom and know that his squad still has more than one line opposing teams have to respect and gameplan for.

The lineup that has worked during the teams’ current three-game winning streak has Ovechkin playing alongside Backstrom and speedy forward Marcus Johansson, with Ribeiro anchoring the hard-working duo of Troy Brouwer and Brooks Laich.

Speaking of Laich, his return to the lineup — along with defensemen Mike Green and Dmitry Orlov — has finally given the Caps all of their weapons to utilize for the first time in 2013. That obviously has helped renew the confidence in the locker room as well.

Now, all of the sudden, a team that has been among the league’s biggest disappointments for much of the year, is suddenly making it much more difficult for critics and skeptics to attack.

The Caps are finally getting healthy at the right time and are finding ways to emerge victorious even on nights when things aren’t exactly going their way. Against the New York Rangers, for example, the Capitals jumped out to a 2-0 lead at Madison Square Garden.

They allowed a goal on a fluky deflection from a bad angle during a 5-on-3 powerplay and another one on a one in a million shot by a goon and it looked like the Rangers were on the verge of cruising to an easy come-from-behind win. Only the Caps didn’t panic. They simply kept playing their game and eventually won 3-2 via their first shootout of the season.

A team that has been considered mentally weak and has been unable to handle much in the way of adversity seems to have weathered the storm of injuries and is now finally able to show the rest of the league what they’re about.

All of that, plus the solid play of goalie Braden Holtby, is why I’m convinced the Capitals are going to make the playoffs.

And it’s clearly now or never for the Caps. Why? Because each of the next seven games are against teams that wouldn’t qualify for the postseason if the season ended today. With only 16 games left to play, you couldn’t ask for a friendly break down the stretch.

So call off the firesale and set aside the obituaries. The Capitals are (hopefully) going to prove over the next seven games that they’re ready for a seat at the grown-ups table. And if nothing else, local hockey fans can at least give thanks that games once again have meaning in our nation’s capital.