no easy answer for these washington capitals 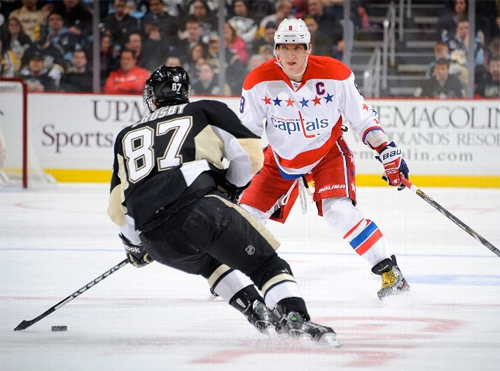 Well damn. So much for the fairytale ending for the 2013 Washington Capitals.

With forward Brooks Laich returning to action for the first time this season, and with the added bonus of a healthy defenseman Dmitry Orlov making his debut this season as well, the hope was that these two players would bolster the lineup and provide a much-needed spark to a team in a season-long slump.

That, of course, didn’t happen as Washington dropped a winnable game by a score of 2-1 to the Pittsburgh Penguins, and the Capitals are really starting to look like a squad with no magic pill to help them awake from their slumber.

Forget, for a brief moment, that the Penguins are the Capitals’ biggest rival. That had little to do with the outcome of this one game.

Instead, notice how Pittsburgh has been constructed. Pay close attention to the depth up and down that roster and how a team without the services of two of the best players in the game today — forward Evgeni Malkin and defenseman Kris Letang — can adapt and overcome.

Even if you hate them, you’ve got to respect that the Penguins are currently riding a 10-game winning streak without two of their top players. Pittsburgh has drafted well and added a few key free agents and that’s why they’re currently the top team in the Eastern Conference.

Conversely, the Capitals are at a point where role players such as Matt Hendricks and someone allegedly named Aaron Volpatti are placed on the team’s top line. In related news, the Penguins have as many wins on the road (12) as the Capitals do both home and away.

With depth, a team can overcome adversity. Without it, you’re forced to close your eyes and pray that no one ever gets hurt and every puck bounces your way.

Not all that long ago it appeared the Caps and Pens were going to be the NHL’s biggest and best rivalry — two premiere teams fighting for league supremacy for years to come. Well, Pittsburgh has held up their end of things. Washington though, is trying like hell to ignore the fact that a total rebuild is needed while turning to its third coach in three seasons.

“This one’s really disappointing,” said forward Eric Fehr, who was focusing his post-game quotes on Tuesday night’s game, but might as well have been talking about the season as a whole. “I thought we had this game. We worked really hard and we did a lot of things we need to do to win games. When you run into a hot team like this they just seem to find a way to win. I thought we deserved that one.”

There was a key moment in the third period when Penguins forward Matt Cooke was sent to the penalty box for four minutes after boarding forward Alex Ovechkin. With the score tied 1-1, it really did seem like this was the perfect opportunity for the Capitals to build some momentum and to steal two points from the league’s hottest team.

But the Caps ran into a “hot goalie,” as they’re prone to say around these parts and were unable to convert the man advantage — giving the home team a huge boost. Just nine seconds later, Pittsburgh buried the puck in the back of the net, thanks to an odd-man rush involving Sidney Crosby, Cooke and Matt Niskanen and that’s all she wrote.

“You feel that momentum switch, the place is getting crazy and you need to be able to withstand that,” said coach Adam Oates. “But we turned it over at the end. It was a winnable game. At the end of that (power play) there’s no way we should give up a turnover. That hurts.”

Look, you can chalk this one up to Pens goalie Marc-Andre Fleury, who made 28 saves while picking up his league-leading 16th win of the season. He played very well and deserves the praise. But the Capitals have been making goalie look like world beaters for years — they just typically save that act for the postseason. Since the playoffs are not an option this season, they’ve had to change things up on the fly.

On this night, like so many before it, Washington had plenty of scoring chances through the game. They simply don’t have enough talent to convert those chances on a semi-regular basis.

And because they don’t have enough talent, they’re a fragile team that, at times, seem to be playing not to lose.

“We had three good chances where pucks bounced over our guys’ sticks right at the wrong time,” Oates said. “We probably could have handled the puck a lot cleaner, but other than that we had our opportunities.”

Again, because the Capitals have no real depth, they need every single puck to bounce their way. So even though they were on a four-minute power play, they still couldn’t make the Penguins pay.

Bigger picture though, this game should be worrisome for Caps fans because Laich was supposed to be the white knight that rode in and saved the season for his struggling squad. But while it was nice to see him back in action again, his presence on the ice couldn’t prevent this game from ending like so many others this season.

So Caps fans must now pin their hopes on the return of a healthy Mike Green (good luck with that) or accept the fact that the season is over. I’m not going to tell anyone else how to cheer for their favorite team, but I think it’s easy to see which way I’ll go from here. Best of luck to the rest of you.