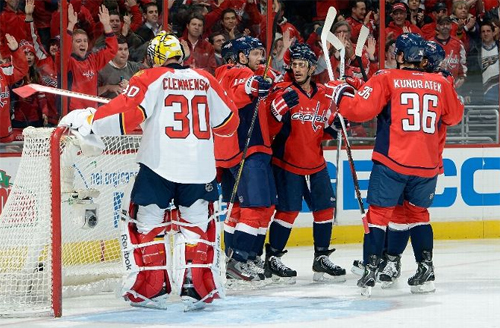 When it comes to hockey, I am a traditionalist in the purest sense of the word.

To me, places like Quebec and Hartford are much more deserving of franchises than most locations below the Mason-Dixon line. Shootouts are terrible and should be removed from professional hockey as soon as humanly possible. And while some might see it as barbaric, I don’t ever want to see a day when fighting is completely eliminated from the sport.

Naturally, my connection to the Washington Capitals has much more to do with the “good ol’ days” of Al Iafrate, Dino Ciccarelli and Bobby Carpenter than it does with Alex Ovechkin, Nicklas Backstrom and Mike Green.

So it should come as no surprise that I have never completely been on board with the Caps playing in the Southeast Division. With apologies to the hockey hotbeds of Florida and North Carolina, it’s never felt right to see the Capitals competing against the likes of the Lighting, Panthers and Hurricanes for bragging rights.

While “Rock the Red” era has ushered in plenty of regular season success — including division titles, Presidents’ Trophies and more — I’ve always longed for a return to the old Patrick Division and the heated rivalries with teams like the Pittsburgh Penguins, Philadelphia Flyers and the New York Rangers.

The question, as best as I can see it, is would you rather see the Capitals routinely feast on lesser talent in the Southeast Division or would you prefer they earn their stripes, so to speak, by sparring with the heavyweights of the Patrick Division?

Would you rather be the best team in the worst division in sports or a middle-of-the-pack franchise in a battle-tested grouping? To me, the choice is clear.

Sure, it was a nice change of pace to see the Capitals have a reason to add some banners to the rafters of the Verizon Center, but, at the end of the day, it’s the difference between being the toughest kid in middle school or a highschool freshman who simply wants to avoid being stuffed in a locker by an upperclassman.

At some point you’ve got to leave the kiddie table and earn your seat among the grown-ups. Otherwise, you run the risk of being a 30-year-old burnout who still lives in his parents’ basement.

Which brings me to Washington’s impressive 7-1 thumping of the Florida Panthers Thursday night. I’ll admit that it was fun to see the place jumping once again as anyone who happened to throw a puck on net for the Caps lit the lamp with ease, but how truly satisfying is it to steal lunch money from a perennial loser?

For all of the regular season accolades during recent history, the Capitals have routinely been exposed as soon as the postseason rolls around. To me, that has as much to do with building a false confidence while thrashing the dregs of hockey as much as anything.

Clearly that’s not possible in the Southeast Division.

Don’t take my word for it though. Instead, listen to what Panthers coach Kevin Dineen had to say after witnessing his squad get blown out by a team tied for the fewest points in the conference Thursday night.

“We are in a situation where we have to play for 60 minutes,” he said. “I think they [the Capitals] smell blood when we come in here. If they can get us early, things will start rolling.”

So while it’s encouraging that the Capitals have won eight of their last 11 games after starting the season by dropping eight of their first 11 games, it’s also important to note where the bulk of those wins have come from.

The Caps are once again playing competent hockey, thanks largely to their 6-2 record against the Southeast Division. Conversely, Washington remains just 4-9-1 against the rest of the Eastern Conference.

Roughly halfway through the season, Washington has done little to suggest they are a playoff-caliber team in 2013, and yet, the Capitals are now just six points behind Carolina for the third-seed with 26 games remaining.

It’s great that goalie Braden Holtby has rebounded after an early-season slump by posting a league-leading three shutouts, but all three of those efforts came against — you guessed it — the Southeast Division.*

*Are you noticing a pattern yet?

Even the players in the post-game locker room seemed to admit that, while it’s nice to cruise to an easy victory, there’s only so much joy to be taken out of a against beating down a team with the fewest points in hockey.

“The mood’s always a lot better when you win a close, tight game, hard-checking game,” said defenseman Karl Alzner. “Whenever you win a game like this there’s not quite as much excitement but guys are really happy. We’ve got a lot of confidence right now.”

Obviously there isn’t anything the Caps can do now to change which division they’re in. The team has little choice but to play the hand they’re dealt and simply try to win the games in front of them.

But at the end of the day, for this team to truly have a chance of accomplishing something special, they’re going to have to lose the training wheels and hold their own against teams that can actually put up a fight.

So enjoy the win, Caps fans. But for me, I’ll wait to see a few more victories over teams like Boston and New Jersey before I get too excited.