capitals are on a roll, thanks to their role players 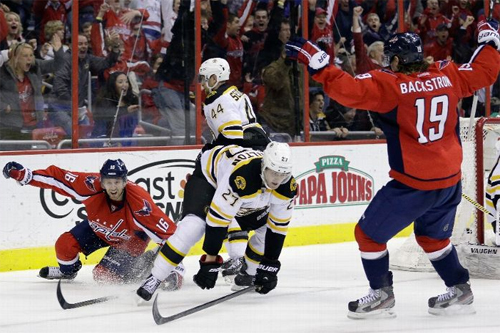 Don’t look now boys and girls, but the Washington Capitals continue to inch their way towards respectability.

The playoffs are still unlikely and there’s still plenty to improve upon (namely the 28th-ranked penalty kill unit in hockey), but Washington appears to be heading in the right direction after a sluggish start to the 2013 season.

That’s not too shabby.

And yet, the Caps are still tied for the fewest points in the conference. That’s what a 2-8-1 start will do to a franchise trying to retool itself on the fly.

The most interesting aspect of Washington’s recent turnaround is that it’s largely coming from non-traditional areas. For years, the Capitals happily billed themselves as the “Young Guns” and a bunch of spare parts.

Well, here’s how those cornerstone players have fared through 21 games this season:

Center Nicklas Backstrom, who has been solid but unspectacular this year, is tied for 41st in the league with 19 points (two goals and 17 assists). Captain Alex Ovechkin, once considered the face of hockey, is currently in a 13-way tie for 60th in the NHL with just 17 points (eight goals and nine assists). And defenseman Mike Green … well … the team would be happy if he could simply stay healthy for more than 10 minutes at a time.*

*I can vaguely recall a fourth player included in the “Young Guns,” but for the life of me I can’t remember that guy’s name. Hmmm. Most not be important. I guess we’ll just move on.

In short, they haven’t been terrible, but none of them is playing anywhere near the elite level they once did.

That wouldn’t be an issue if they weren’t Washington’s three highest-paid players. In related news, Ovechkin, Backstrom and Green account for one third of the team’s total salary cap space (roughly $22.3 million out of $64.2 million) while all three continue to have a less-than-stellar season at the same time.

So how are the Caps staying competitive? For starters, goalie Braden Holtby has solidified his place as the team’s top netminder.

Then there is free agent to be, center Mike Ribiero, who is currently tied for 11th in the NHL in scoring with 25 points. The Capitals currently boast the league’s fourth best powerplay and that’s largely because of Ribiero (who has five goals and eight assists for 13 points on the powerplay).

Let’s not forget forward Troy Brouwer, who leads Washington with nine goals. Or Joel Ward, who was the team’s most dependable scoring threat during the early stages of the season. But the most encouraging aspect over the last 10 games is the fact that many of the team’s less heralded players have elevated their play.

Look no further than the team’s thrilling 4-3 overtime victory over the Boston Bruins. Not only did the Capitals finally register a win over a playoff-caliber opponent, but they did so on the back of several role players.

Tomas Kundratek got his first NHL goal. Steve Olesky earned his first NHL assist. Wojtek Wolski scored his first goal in over a month. And each of them was completely overshadowed by power forward Eric Fehr, who ended the game in dramatic fashion after fighting his way through two Boston defenders and going top shelf with a wrist shot that sealed the comeback.

“I kind of blacked out for a bit there,” Fehr said. “But I saw the puck on my stick close to the net, saw [Bruins goalie Tuukka Rask] was leaning my way, so just tried to chip it over.”

In should be noted that the Bruins, who led 3-0 after the first period, came into the game 8-1-1 on the road this season. They’re off to a great start and, even though this was their third game in four nights, had plenty of motivation after being eliminated by Holtby and the Capitals during last year’s playoffs.

The Caps, on the other hand, were without the services of Green and had to try to overcome an off night from Ovechkin, who was directly responsible for two of Boston’s three goals. So there was little reason to think the Caps could magically flip a switch and rebound after such a disastrous opening period.

But the players never panicked and didn’t quit. Instead, they regrouped and tried to simply make it a competitive game again.

“We needed this,” Wolski said. “There have been so many times in the beginning of the season where we gave up leads and kind of broke down as a team.”

Much like the 2013 season in general, the Capitals dug themselves a huge hole and then tried their best to overcome it.

For one night, at least, Washington was able to display the “testicular fortitude” necessary to win a statement game. Was it a sign of things to come or simply a case of catching a tired team at the perfect time? I guess we’ll see. But for now, it’s nice to see the players pick up a meaningful win.