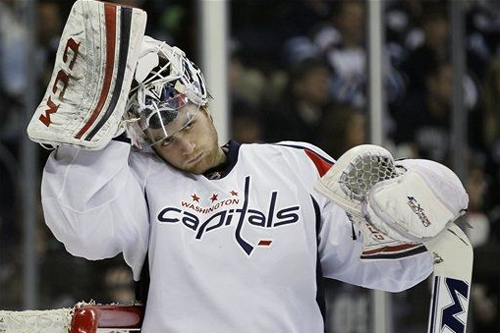 Well, at least the Washington Capitals like to keep things interesting.

Most reasonable hockey fans knew this would be a season of transition as the Capitals essentially had to learn first-time coach Adam Oates’ system on the fly. Considering they didn’t have the benefit of a standard offseason thanks to the lockout, it wasn’t a stretch to envision these players needing some time and in-game experience to learn how to embrace offense once again after the Dale Hunter era.

Some nights, the players on the Capitals roster look as though they’re playing together for the first time. Other nights, they seem as if they’ve been playing in this system for years as they make smart decisions with the puck and play positionally-sound hockey.

In short, they absolutely look like a team going through the necessary growing pains as they work towards some much-needed stability after turning to their third coach in less than three seasons.

That is why it’s absolutely pointless to dwell too much on the outcome of one single game — good or bad. Sure, it’s tempting to overreact after one outing (like, say, a lackluster showing against the Philadelphia Flyers), but anyone watching this season with an eye towards the bigger picture understands that games like that are necessary during the evolution process.

Whether you’re talking about an 82-game season or an abbreviated 48-game slate, it’s safe to say all teams* are going to have nights when they’re both mentally and physically outmatched.

*Except the Chicago Blackhawks. They may never lose again.

The most important trait a team — regardless of sport — can have is how it responds to adversity. Okay, you got beat up and had your lunch money stolen by the Broad Street Bullies. Are you going to shut down and feel sorry about yourself or are you going to use that game as motivation to ensure it doesn’t happen again?

While these players still struggle with consistency period to period and game to game, Caps fans should still feel encouraged that the team is still putting up a fight even though the first half of the 2013 season has been far from ideal.

Yes, Washington remains tied for the fewest points in the Eastern Conference, thanks to a horrific 2-8-1 start, but they’ve done their best to bounce back over the last month.

Even with the poor showing against the Flyers last week, the Capitals have won six of their last nine games. And what do all nine of those games have in common?

No player epitomizes the 2013 season for the Capitals more than Holtby. On the nights when he’s “in the zone,” the Caps can compete with anyone. On his off nights though, they typically struggle to remain competitive.

While it’s not earth shattering to hear a team is only as good as its goaltending, I do believe that the future can still be bright for Holtby and the Oates-era Capitals.

The Capitals, who started the season 0-2 against the Southeast Division, have had much more success against their divisional “rivals” of late. After opening the season with back-to-back losses against Tampa Bay and Winnipeg, Washington has reeled off five-straight victories over the worst division in hockey — including a 3-0 win over the Jets Saturday.

Holtby has backstopped all five of those divisional wins, stopping 149 out of 157 shots he’s faced, while collecting three shutouts. During this five-game winning streak against the Southeast Division, the 23-year-old’s numbers are sensational — 1.60 goals against average and a .949 save percentage.

So while you might hear from long-time hockey fans and traditionalists (like myself) that when realignment happens, Washington needs to go back to competing regularly with their old Patrick Division cohorts like Pittsburgh, Philadelphia and the two New York teams, it would be in the team’s best interests to avoid legitimate competition and instead continue to feast on the dregs of hockey.

The playoffs are still highly unlikely for the Caps this season, but they’ve still got an outside shot because of the stellar play of Holtby of late and the fact that no one else in the Southeast Division is any good. The Capitals are currently eight points back of Carolina with 28 games left on the schedule.

It’s not ideal, but it’s manageable. And even if the Caps are unable to dig themselves out of the hole they’re in after their horrid start, there’s still reason to believe the team will continue to improve as they become more and more comfortable playing Oates’ brand of hockey.

This season is still very much a work in progress, but at least the Capitals — and Braden Holtby — are improving as the year goes on. Regardless of whether the Caps can make the postseason this year or not, things are looking a lot less bleak than they were a month or two ago.