holtby and capitals give reason to celebrate 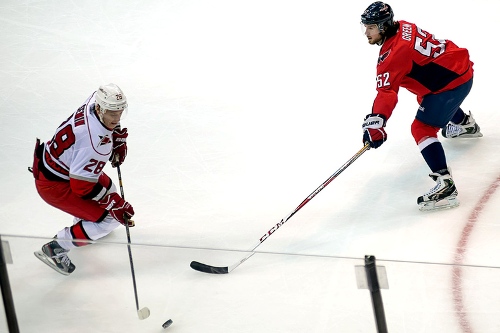 One of the reasons the Washington Capitals hold such a special place in my heart is because, growing up, it was a family tradition to spend my birthday at the rink watching the Caps in action.

Even now, all these years later, I still can’t help but scan the schedule when it’s released to see which home game is closest to my birthday.

Some seasons it’s an otherwise mundane Wednesday night game against a doormat like the New York Islanders. Other years, it’s a highly-anticipated contest involving a former player’s return to D.C.

Obviously, the return of forward Alexander Semin, who scored 197 goals during his seven seasons in Washington, made Tuesday night’s affair must-see TV for any and all Caps fans.

Whether you loved him for his lethal wrist shot or you hated him for his penchant for taking mind-numbing penalties in the offensive zone at the worst-possible time, it’s clear — possibly for the first-time ever — people cared about the Carolina Hurricanes coming to town.

So naturally, because the hockey gods have a wicked sense of humor, the most polarizing player on the ice found himself with a one-on-one breakaway in the early stages of the game.

While the Capitals were on the powerplay roughly three minutes into the contest, Carolina forward Eric Staal fed Semin with a perfect pass that left the Russian forward all alone against Caps goalie Braden Holtby. The 23-year-old goalie, who just signed a two-year extension Monday, got a glove on Semin’s shot attempt and the tone for the game was set.

Washington scored on their next powerplay opportunity, courtesy of a Nicklas Backstrom tally that was set by center Mike Ribeiro — who essentially replaced Semin on the roster — and the Caps never looked back.

The Capitals only led 1-0 after the first period, but it was readily apparent which team was in control of the game. Washington registered 17 shots on goal in the first frame and Holtby was absolutely dominant on the other side of the rink.

“That was a pretty classy move that Eric had there,” said Hurricanes coach Kirk Muller. “He has a breakaway and lays it up to [Semin] to give him the opportunity to be the hero early in the game. But [Holtby] made the save. That could have been the difference right there.”

The rest of the evening, Semin was solid, but unspectacular — finishing the game with four shots on goal (on nine shot attempts), with no points, no penalties and a -1 rating. He was clearly motivated after hearing not-so-flattering comments by former teammate Troy Brouwer earlier this week, but fortunately for the home team, Semin is still content to settle for low percentage wrist shots from long range.

“Any skilled player like that, you have to be as patient as you can,” said Holtby of Semin. “He’s not a hard guy to pick out on the ice.”

Speaking of Holtby, for as erratic as he was earlier in the season, the youngster has clearly turned things around during this recent stretch of play. The second-year pro has gone 5-2 with a 2.01 goals against average, a .937 save percentage and with two shutouts in his last seven starts.

So maybe it wasn’t a bad idea for the front office to lock him into a new deal sooner rather than later, if this is a sign of things to come the rest of the season.

“He’s playing very well,” said Capitals coach Adam Oates of Holtby. “They had a few extra shots, but chances wise they didn’t have a lot of chances tonight. A lot of those shots he sees from a long way out. I think he’s feeling really good. He’s on a little roll, so we’re riding him.”

And is often the case in hockey, where a team is only as good as the goaltender they’re playing in front of, the Capitals no longer look like a pathetic last-place team anymore.

As former player Alan May pointed out, Washington went 1-4-1 during the first six games of the season and 2-4-0 over the next six games. Well, the Capitals improved to 4-2-0 these last six games and now are just four points out of first place in the completely mediocre Southeast Division.

“I think it’s been going great,” said defenseman John Carlson, who scored a goal against Carolina. “The best part of the whole scenario is that from day one, everyone stuck to it. When we were losing games and we were playing bad, guys didn’t come in the room and question anything. We stayed as a team and we did the right things. Clearly it took a little bit longer than any of us would like, but in the end hopefully it works out for the better.”

On a night when they were playing a highly-motivated opponent and when captain Alex Ovechkin failed to register a single shot on net, the Caps put together arguably their best performance of the season.

Each and every game they look more and more comfortable playing Oates’ brand of hockey. Holtby has been exceptional. The powerplay is surging. All in all, for the first time in 2013, there might just be reason for Caps fans to be a little cautiously optimistic.

And if that isn’t the best possible present for my 36th birthday, I don’t know what is.