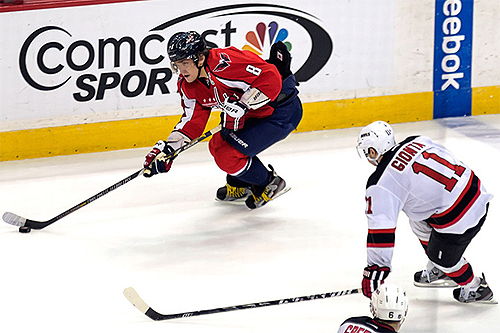 The Washington Capitals snapped a five-game losing streak to the New Jersey Devils in impressive fashion — cruising to a 5-1 victory at the Verizon Center Saturday.

The win was vital for several reasons — first and foremost, it marked the first time this season the Caps actually defeated a team in one of the top eight seeds in the Eastern Conference (they were 0-7-1). After all, it kind of goes without saying you can’t really make up any ground if you can’t actually beat any of the teams ahead of you in the standings.

It was also nice to see Washington put together a solid outing against the Devils because that’s where first-time coach Adam Oates came from and the Devils represent the blueprint Oates believes will help get the Capitals back on track. Beating the team you’re quietly trying to emulate can obviously do wonders for a team trying to establish a new brand of hockey.

But most importantly, this game was easily the best performance of captain Alex Ovechkin, who recorded the 11th hat trick of his career (and his first since Jan. 22, 2011, against Toronto). The Great 8 added assist for good measure, which equaled the most points by Ovechkin since Feb. 4, 2011 (and was the 14th time in his career that he has tallied four or more points in a game).

It took 17 games, but Ovechkin finally registered more than one goal in a game this season. And anyone who watched the first game against New Jersey two days earlier knew it was only a matter of time before Ovechkin found the back of the net.

Although he failed to pick up a point in Washington’s 3-2 loss to the Devils Thursday night, Ovechkin had one of his best games of the season. He was flying up and down the rink. He was hitting people whenever the opportunity presented itself. Most of all, he was clearly engaged and motivated.

So it made perfect sense that 48 hours later against the same opponent, Ovechkin picked up where he left off and the floodgates opened for the talented winger and, bigger picture, for the Capitals as well.

“If you are doing the right things it will turn your way at one point,” Oates said. “You have to believe in that. That’s almost every life lesson. He’s [Alex Ovechkin] been getting a lot of chances. He could have had a few last night. In New York he had 14 shots, which means that the guys he’s playing with and himself are doing the right things. He’s getting opportunities. Good things happen sooner or later.”

The game was actually tied 1-1 heading into the third and final frame but, fortunately for the Caps, Ovechkin saved his best work for when it mattered most. Having already scored a goal in the second, Ovechkin lit the lamp just 1:23 into the third period and the Capitals never looked back.

For the goal, Ovechkin used Devils defenseman Anton Volchenkov as a screen and fired the puck pas an unsuspecting goalie Johan Hedberg to give his team a 2-1 lead.

“You want to see your go-to guy get some,” said Oates. “Him scoring first for us gets the place going. The fans love him. The place is rocking. It obviously helps the team.”

With less than five minutes remaining, Ovechkin capped off the hat trick with a powerplay tally that essentially ended the competitive portion of the game and ensured the hometown crowd went home happy.

“The chances are there,” Ovechkin said. “Sometimes I feel that the puck just doesn’t want to go in. Today, it was that kind of game that almost every shot goes in, or at least it feels like that. It’s kind of nice.”

Amazingly, the 124 regular-season games Ovechkin played between his last two three-goal performances was the longest hat trick drought of his NHL career, by far. His second-longest drought was 89 games, between hat tricks No. 2 (Dec. 15, 2006 at Atlanta) and No. 3 (Dec. 29, 2007 at Ottawa).

The difference, for this game at least, was how well Ovechkin played with linemates Mike Ribeiro and Jason Chimera. Oates has juggled his lines often this season trying to find the perfect combination. For now, this is a line that opposing teams are going to lose sleep over.

“Our line has good chemistry right now,” Ovechkin said. “Chimmer knows exactly what he has to do and I know where Chimmer’s going to be. We are talking before the game and between the periods. And especially with Ribs who is a guy who can control the puck in the neutral zone.”

The most noticeable aspect of the top line’s production was how they found success. In years past, Ovechkin had little trouble rushing into the offensive zone with the puck on his stick and making whoever tried to stop him look foolish as he used his speed, power and anything else necessary to score goals.

Against New Jersey though, two of Ovechkin’s three goals came with him basically standing in place waiting for his teammates to get him the puck. He’s most effective these days playing the role of Ray Allen on skates. All he needs to do is find an open area in the defense, wait in the ready and immediately fire it on net like a spot-up shooter waiting to drain a three pointer.

As he begins to embrace letting his talented teammates share the burden (i.e. – do the heavy lifting) rather than trying the same, tired moves that lost their effectiveness two or more seasons ago, Ovechkin is quickly re-establishing himself as Washington’s best player. It might sound odd on the surface that doing less makes the captain more effective, but that’s what’s working these days. So let’s not over-think it.