capitals season is lost, but is it a lost cause? 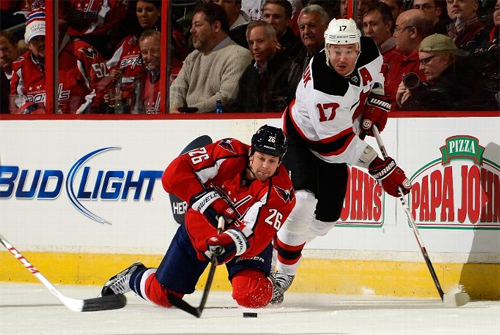 Whether fans want to admit it or not, realistically speaking, the competitive portion of the Washington Capitals’ season is over.

Sure, this year’s squad still has plenty of games left on the schedule, but their horrid start (winning just twice in the first 11 games) has all but ensured the Caps will miss the playoffs for the first time since the 2006-07 campaign.

While their level of play is significantly better than it was during the first quarter of the season, the Capitals are still struggling to put together a full 60-minute effort on a consistent basis.

They can look great for one or two periods of play, but at some point during a game they begin to face adversity and these players still seem incapable of working through whatever obstacles come their way when the going gets tough.

Heading into the final frame Thursday night, Washington held a 2-1 lead over the New Jersey Devils at the Verizon Center. During an eight-minute span in the third period though, the Caps completely came unglued and as they were whistled for five penalties.

The Devils scored twice and that’s all she wrote. What’s worse is the deciding goal came on a 5-on-3 powerplay for New Jersey — with defensemen John Erskine and Tom Poti both sitting in the penalty box.

The Capitals had already dodged a bullet earlier in the period by killing New Jersey’s first two-man advantage, but the second time around Devils sniper Ilya Kovalchuk made the home team play.

“It’s frustrating and we talked about it,” said center Nicklas Backstrom. “We have to be more disciplined. It’s not good enough. The first 5-on-3 we did a good job, but we got another one right after.”

When I say the competitive portion of the season is over, I’m not talking about individual games. In fact, the Caps are doing a much better chance of giving themselves a chance at victory every time they take to the ice.

Unfortunately though, they were so bad during the first dozen games after the lockout that any realistic hope of putting together a memorable 2013 season is gone. Even now, the players seem to be getting a better grasp on what first-time coach Adam Oates wants from them, but they’re still unable to play his style of game effortlessly.

It’s not yet ingrained into their minds. It’s not yet second nature. Add in the tendency to take penalties in bunches (11 penalties in the last two games alone) with the team’s pitiful start and it’s safe to say the Capitals are playing for moral victories from this point on.

In the last two games — both one-goal losses — Washington has allowed 77 shots on goal. It doesn’t matter how skilled goalie Braden Holtby is in net. There’s only so much he can do when faced with that many pucks flying at him.

Once upon a time, the Capitals were a lock anytime they went into a third period with a lead. Those days are gone.

Already three times this season, they’ve suffered a collapse in the final period and choked away a winnable game. Of course, what do you expect from an undisciplined team that allows opponents to fire at will on their goaltender?

The best thing these players can do is dedicate the rest of this season to learning Oates’ system. They need to spend every waking moment studying his preferred way to play the game and don’t stop until it becomes their preference as well.

You’re not making the playoffs this year, so get a head start on next season. Let Oates figure out how to be a successful coach at the NHL level. Let management decide which players are worth keeping around and which players need a change of scenery.

Bottom line — this season is lost, but it doesn’t need to be a lost cause.