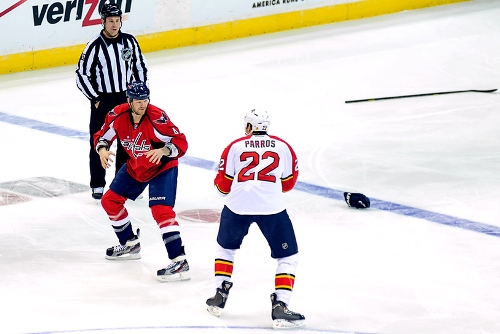 Sure, it took one quarter of the 2013 season, but the Washington Capitals finally put together a 60-minute effort to be proud of — cruising to a much-needed 5-0 victory over the Florida Panthers over the weekend.

Overlooking, for a moment, that the last-place Capitals needed 12 games to put together one respectable performance, this game could easily be the confidence-building effort this franchise has desperately needed.

For starters, the Caps scored a season-high five goals and recorded their first shutout of the season. Just as importantly though, four different players scored goals for Washington and 10 players picked up at least one point against Florida.

Forward Troy Brouwer scored twice and goalie Braden Holtby stopped all 27 shots he faced as the Capitals improved to 3-8-1.

“I thought tonight that we had a really good rhythm for the whole game,” said coach Adam Oates. “We’ve had it at times, but tonight I felt comfortable just rolling [all four lines].”

After the game, the mood in the Capitals’ locker room was much lighter than it’s been for much of the season. It’s amazing what one respectable outing can do for for a franchise.

“We had a team meeting with the guys just to press the reset button and to calm down and go out there and support each other and make plays,” said forward Joel Ward, who had a goal and an assist against the Panthers. Today we made a good effort.”

From the start, the Caps looked motivated. They were playing sound hockey and were making smart decisions — both with and without the puck. No overly risky passes. No ill-advised penalties. For one night at least, they resembled the team that captured the hearts of so many in this town.

“I had a feeling right away that we were going to play well,” said captain Alex Ovechkin. “Everybody was focusing and not joking around. That’s how we have to play. The first goal was huge for us. The whole team was better. We didn’t give them any easy breaks and Holts [Braden Holtby] made some big saves.”

While guys like Ward are crediting the player’s only meeting, I actually think the tone for this game was set 24 hours earlier, when general manager George McPhee came out of hiding to share his thoughts on his team’s underwhelming start to this abbreviated campaign.

In the eyes of the players, those last two sentences are huge. They know they haven’t been any good this season. They know that — first-time coach or not — they’re expected to make the playoffs and compete for a divisional title year in and year out. So rather than looking over their shoulder in anticipation of management making a rash decision, they now know McPhee (for the moment, at least) is on their side.

So it’s safe to say that public vote of confidence provided much-needed relief to players who have already referred to themselves as “mentally weak.” The players were probably also relieved to hear that, even though they’ve been dreadful since the lockout ended, owner Ted Leonsis also remains in their corner.

“I’ve had some real good discussions with ownership over the last couple of days,” said McPhee. “They’re obviously not very happy. But they’ve been supportive. At times like this, ownership can pile on and make things worse or ownership can say, ‘How can we help? And what can we do to make it better?’ And it’s been the latter. I provided some options, and they provided some real clear direction, which was great.

“So that being said, if there’s something I can do to help the club out, I will,” McPhee continued. “But I’m not going to do anything stupid.”

The other boost the Capitals received over the weekend was the return of defenseman John Erskine, who finished serving his three-game suspension after an elbow to the head of Philadelphia Flyers forward Wayne Simmonds.

Earlier this season, I joked that the Caps are undefeated when sniper Erskine lights the lamp, but the 32-year-old’s impact is more often felt when he doesn’t have possession of the puck.

While defensemen Mike Green and John Carlson have struggled at times in their own end this season, Erskine has done a masterful job of providing grit and toughness on Washington’s blueline. He’s not the most gifted skater and anything he contributes on offense has to be considered a bonus, but Erskine has lasted a decade in the NHL by embracing a tough and physical style of play.

Just over five minutes into this game, Erskine dropped the gloves with heavyweight George Parros.*

*Parros, it should be noted, has fought 104 times over the last five seasons. You don’t throw down that often unless you’re pretty good at it.

But Erskine handled Parros and the bout seemed to inspire the Capitals. Later in the opening period, the Caps benefited from a lucky bounce — when a shot from Carlson deflected off of the backside of Brouwer and into the net.

Washington scored twice more in the second period and the game was all but over. All it took was a vote of confidence from management, the return of Erskine to keep opposing players honest and a lucky bounce to make the Capitals resemble to team of old.

Was it a one-game fluke or the beginning of a turnaround towards respectability? No one knows.

But hockey is such a streaky game that it wouldn’t surprise me at all if the Caps don’t come out Tuesday night ready to build on this impressive performance.