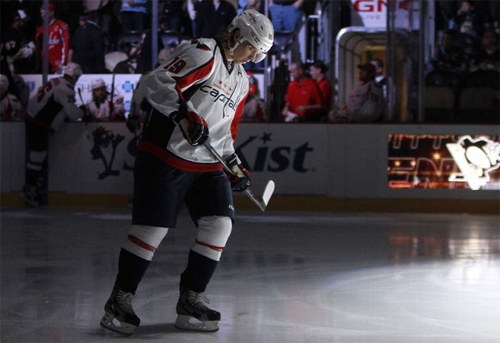 This might be a tad surprising to hear the day following a disheartening 5-2 loss to the Pittsburgh Penguins pushed them further into the basement of the NHL standings, but the Washington Capitals aren’t that bad.

Honestly, there are time when they look downright competent on offense, defense and in net.

Unfortunately, those times appear to be few and far between through the first 11 games and the one overriding characteristic of the 2013 Capitals appear to be their complete inability to handle any adversity whatsoever.

“We’re weak mentally right now,” said defensemen Karl Alzner. “When they score a goal, we’re not bouncing back quick enough. When momentum is against us, we’re not fighting past that, whether it’s with a big hit or a fight or something. We’re not an emotional enough team right now, and that’s something that has to change if you want to win.”

During the first period of play in Pittsburgh, the Caps were the better team. They were sound defensively, with forwards eagerly dropping back to clog the Penguins’ passing lanes, which in turn helped create chances on the other end of the ice.

Washington even caught a break just over four minutes into the contest when center Mike Ribeiro scored a goal while Penguins goalie Marc-Andre Fleury had lost his goalie mask. The Caps have been so snakebitten this season, I half expected the officials to wave off the goal because the goalie was defenseless. Mercifully, that didn’t happen.

But whatever good will and momentum the team had working in its favor after 20 minutes, was clearly nowhere to be found during the second period. The Penguins scored five goals in the middle frame — two of Michal Neuvirth and three on Braden Holtby — and the rout was on.

“I don’t know if we get complacent in the second period because we think we’ve had a good period and it’s going to come easy,” said Caps forward Troy Brouwer. “I don’t know. We’ve got to figure it out. We’ve got to stay mentally strong throughout the whole game and find ways to keep ourselves mentally checked into games and ready to play throughout the entire 60 minutes.”

Momentum shifted in Pittsburgh’s favor after Alzner was whistled for a questionable holding penalty. The Penguins scored just 10 seconds into the powerplay and even though the scoreboard said the game was tied, it was clear which team came to play and which team was in the process of caving in.

“We definitely got outplayed in that second period,” Alzner said. “The penalties didn’t help, but they played a lot better than we did. We weren’t strong enough on pucks, we didn’t work hard enough, things were bouncing, we weren’t bearing down enough. They capitalized on their chances just like last time we played them.”

Or as captain Alex Ovechkin put it — “We got a lead and we stop playing.”

I still believe it’s too early to definitively say whether or not Adam Oates is a good coach — especially with him taking over a franchise for the first time without the benefit of a standard offseason. But I do give him tons of credit for trying to remain positive to the best of his ability while this rudderless ship is clearly sinking.

“I thought we were playing really good hockey and I just thought they were goals that kind of deflated us,” he said.

Oates even tried to swing momentum back in his team’s favor — pulling Neuvirth after allowing two goals on just 11 shots, but the move obviously didn’t work on this night.

“We kind of leaked oil for five minutes, and that’s all you need in the NHL right now,” Oates said.

Alzner is right — this team is definitely struggling with confidence. What used to come naturally to so many people on this roster is no longer automatic and it’s apparent to anyone tuning in on a regular basis these guys are essentially waiting for something to go wrong.

“We need a win and once we get that win, confidence will build up,” Ribeiro said. “We just have a hard time playing 60 minutes.”

Until the Capitals are able to accomplish the basics, such as playing a full 60 minutes without self imploding, this season is going to continue to be debacle. And even though they’re struggling in every single phase of the game, they’re going to have to find a way to stop playing scared.

They can’t skate around timidly waiting for the first sign of adversity to send them into yet another tailspin, and they can’t shut down the first time a call doesn’t go their way. These are points that a coach typically needs to drive home to a team of squirts or mites, as opposed to an NHL franchise that just a few short seasons ago was considered one of the league’s elite teams.

If Bruce Boudreau was still around, he’d tell these guys to stop feeling sorry for themselves and start playing some hockey. Hopefully Oates feels the same way.