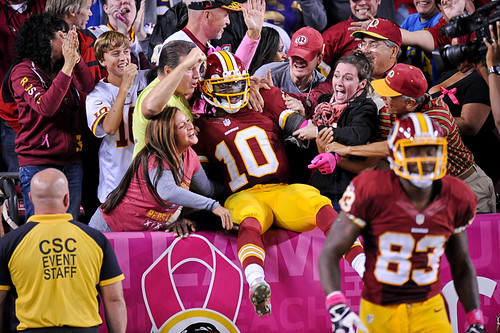 As if there was ever any doubt.

The NFL’s worst-kept secret is officially out of the bag and Washington Redskins quarterback Robert Griffin III is officially the 2012 AP offensive rookie of the year.

Considering the last time RGIII’s name was in the headlines it was to announce he had successfully undergone surgery on his right knee after damaging it in Washington’s home playoff loss to the Seattle Seahawks, it was a welcome feel-good story for the league’s most electrifying young talent.

“Well, it’s a truly a blessing to be up here and be able to stand, first and foremost,” Griffin said after accepting his award during the NFL Honors awards show Saturday night. “I had a tough injury there at the end of the season. I thank our coaches, thank our players. I want to give a hand clap for Alfred Morris, who’s also up for this award. All the competition for this award was extremely good … It seems like the league’s in good hands with the young quarterbacks.”

In his rookie season, the former Heisman Trophy winner completed 258 of 393 passes for 3,200 yards with 20 touchdowns and only five interceptions while leading the worst-to-first Redskins to a 10-6 record and their first NFC East title since ’99. The second-overall pick also rushed for 815 yards (an NFL record for rookie quarterbacks) with seven touchdowns.

Here’s the best part of the story — for all of the talk in some corners of the football-loving world about how Colts quarterback Andrew Luck and/or Seahawks quarterback Russell Wilson were possibly more deserving of the award, Griffin won in a landslide. Seriously, it wasn’t even close.

Griffin received 29 votes from the AP’s 50-member panel, while Luck garnered 11 votes and Wilson got 10. To put it another way, RGIII earned more votes than Luck and Wilson combined.

Finally, Griffin — who said he’s been off crutches for two weeks now — firmly believes he’ll be ready to take the field with the Redskins when the season opener rolls around this fall.

“It’s feeling good,” he said. “I went through the toughest part already, so it’s now it’s just about being smart, not pushing it too much. That’s what the doctors are there for, to keep me from doing too much.”