has the window closed on ovechkin and the caps? 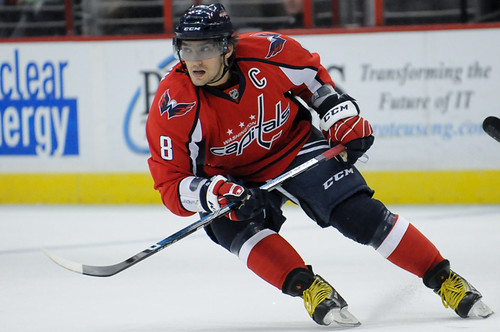 After the Washington Capitals picked up their first win of the season over the weekend, an amusing statistic made the rounds that stated the team is a perfect 9-0 when defenseman John Erskine scores a goal.

It’s a lighthearted stats since, for his career, the 10-year pro converts on less than four percent of his shots and averages a goal roughly once every 35 shots he takes.

Because Erskine will never be confused for an offensive-minded defense and he’s more than happy staying home while letting his teammates jump up in the play, any time he lights the lamp it’s simply viewed as a bonus.

The same, of course, cannot be said about forward Alex Ovechkin.

Since the moment he came to Washington, Ovechkin has been this franchise’s most important player.

He’s the captain. He’s the face of the franchise. He’s the team’s highest paid player.

For seven years, the Capitals have lived and died with Ovi.

Unfortunately, since the beginning of last season, Ovechkin hasn’t really been Ovechkin.

Sure, he has nights when he shows flashes of his reign as the league’s most lethal player, but it’s crystal clear to anyone watching the Caps these days that the 27-year-old is a shell of his former self.

In related news, the Capitals are undefeated this season when Ovechkin — like Erskine — scores a goal. That’s the good news.

The bad news is Ovechkin has scored just once in six games this season and the team is a pitiful 1-4-1. While it’s still early, only the Florida Panthers have less points than Washington at this point of the lockout-shortened season and there’s little reason to believe that’s going to change anytime soon.

Don’t get me wrong, Ovechkin isn’t the only player who has had a rough start to the 2013 season.

Center Nicklas Backstrom, who suffered a neck injury after taking a scary hit while playing overseas during the lockout, has rarely made his presence felt during the first six games of the season. Whether it’s a fluke or not, defenseman John Carlson is seemingly on the ice every single time an opponent scores a goal. And goalie Braden Holtby lasted just two games as the starting goalie before being benched for ineffective play.

But this is Ovechkin’s team, so while there’s plenty of blame to go around as the Capitals are mired in mediocrity, he’s the guy who needs to be Washington’s best player every single time he takes the ice.

The Capitals are on their third coach in three seasons. They’re running their third system in three years. They’ve even swapped out the bottom third of the roster in trying to find the right mix of complementary players to mesh with the top-tier talent.

And yet, the Caps continue to get worse; not better.

With so much change everywhere else in the organization, it’s becoming increasing clear there are only two possible people left to shoulder the blame — general manager George McPhee and Ovechkin.

How many more coaches, systems and role players need to come and go before people accept the fact that the glory days of the artists formerly known as the “Young Guns” has come and gone?

The minute the guys in the locker room tuned out former coach Bruce Boudreau, it started a chain reaction that has seen the franchise rapidly decline from the most exciting team in hockey to irrelevant almost overnight. McPhee was left with no choice but to relieve the most successful coach in franchise history and little has gone right since.

The Dale Hunter era was painfully bland for everyone involved and couldn’t end soon enough. Now, first-year coach Adam Oates is trying to teach a brand-new system on the fly to a roster full of players who may or may not have arrived in hockey shape.

Winning the mediocre Southeast Division and/or making the playoffs this season would have been difficult without the added challenge of the lockout. With those added distractions and the declining production of the team’s most pivotal player though, this season could be a tough one to watch for Caps fans.

Considering the fact that Wizards general manager Ernie Grunfeld remains employed by owner Ted Leonsis even though his putrid basketball team has gone just 295-470 since he was hired back in ’03, it’s safe to say GMGM isn’t going anywhere anytime soon. And it’s probably an equally safe bet the Caps aren’t going to be willing or able to unload Ovechkin anytime soon either.

So unless Ovechkin, who has nine years and roughly $88 million remaining on his contract, regains his mojo and starts playing like the Russian Machine of old, it appears as if the window has closed on the “Rock the Red” era Washington Capitals.

That’s not an enjoyable thought to have to consider only six games into a season — especially when it looked for so long like there wasn’t even going to be any hockey to be played this year — but this has been coming for a lot longer than the last two weeks.

For the record, I take no joy in being the bearer of bad news. I’ve just reached a point with Ovechkin and the Capitals were it’s nearly impossible for me to believe anymore than the player or the franchise is going to flip some magic switch and magically be competitive once again.