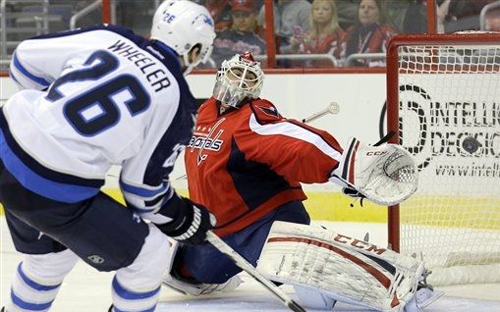 If ever the fans and players of the Washington Capitals needed a harsh reminder that nothing is guaranteed in life, the start of the 2013 season has clearly driven that fact home.

Just two games into the season, the Caps are already showing that this strike-shortened season might not necessarily be all that enjoyable in our nation’s capital.

Losing 6-3 to the Tampa Bay Lightning on the road in the season opener is one thing – after all, they’re a talented team that’s returning the action with all of the major players still in place from the last time they took the ice. But falling 4-2 to the Winnipeg Jets at the Verizon Center in the home opener is much more concerning.

One poor outing can be chalked up as a minor setback, but two straight duds is the start of something more. Unfortunately for the Capitals, they’ve now played two games and in both instances, they’ve been outworked, out-hustled and out-played by their opponent.

“The guys didn’t look like they had much in the tank,” said coach Adam Oates. “I’m sure that’s a product of this season and what happened and our conditioning levels which we talk about every day.”

Oates, of course, is referring to the lengthy lockout that forced the players to take an extended break away from the game.

Because the players are returning to action in various forms of conditioning (which is a polite way of saying – some guys are in much better shape right about now than others), there are going to be days when guys look like they’re playing in quicksand.

There are going to be times, especially early on, when guys want to kick it into high gear and their legs aren’t able to make it happen.

But that’s supposed to be a two-way street. That’s supposed to be an issue for players on both the Capitals and the opposing team. And yet, for two games now, it seems that whoever lines up against Washington is skating at full speed while the Caps are playing catch-up.

“I didn’t think we had the energy we needed tonight,” said Caps forward Matt Hendricks, who was one of the few players who bothered to show for the game. “One of our keys to success was to put them on their heels, put pucks in their end, get them to turn, get them to work. They played last night and we didn’t make it look like that.”

“It is a good system. It’s going to be hard and we have to fight through that,” Oates said. “I thought we could have had better execution. We didn’t give ourselves the opportunity to play the team game. We turned it over on the blue line too many times, little subtle things that could have gone better to help ourselves.”

Hendricks gave Washington an early 1-0 lead midway through the opening period and then the Capitals promptly fell asleep at the wheel – allowing Winnipeg to score four-straight goals.

The lack of effort across the board was especially disappointing considering the Caps had won 10 straight home openers.

“It was a little surprising,” Hendricks said. “We have been talking since we got back in town about how much we missed Verizon Center and our fans, playing in front of them and the support they give us. I thought guys worked hard, but we need a little bit more energy.”

Goalie Braden Holtby’s struggles continued for a second-consecutive evening, with his overly aggressive mindset once again biting him in the backside as the opposing team capitalized on the 23-year-old’s tendency to over-pursue or over-commit on a play from time to time.

The talented youngster has now surrendered 10 goals on the year and it’s not a question of if Oates will turn to Michal Neuvirth, but when he will opt to do so.

Capitals forward Joel Ward, who along with Hendricks is one of the few players who has played well this season, isn’t ready to hit the panic button just yet.

“It’s two games out of 48. It’s a long way to go,” he said. “Anything can happen, obviously. We are just focused on the next day and the next game.”

While that’s a reasonable stance for a player on a slumping team to take, I can’t help but think things aren’t going to get better unless something drastic happens.

This is their team. They are the highest-paid players. And yet, none of them has made much of an impact thus far.

When the Caps allow five goals on 12 powerplay attempts, that’s more than enough reason to start the hand wringing.

When the Cas are getting run out of their own building by a mediocre Jets squad playing on back-to-back nights, that’s cause for concern in my book.

And when the Caps continue to vanish for entire periods at a time … well … that’s when panic begins to set in.

Every game on the schedule this season is against an Eastern Conference opponent, which means every Capitals loss during this 48-game tilt is magnified because they’re giving up ground in the conference standings.

Yes, there are still 46 games left to play and that’s more than enough time to get it all together. But if too much time passes while this team continues to display these bad habits, the season will be over before you know it.