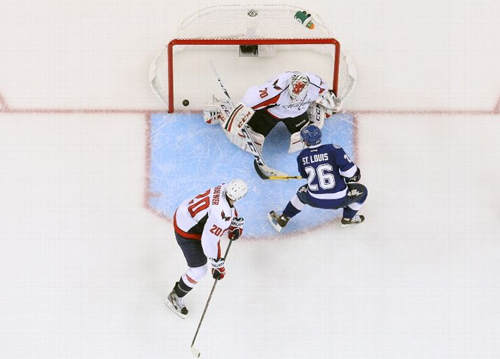 After an extended offseason, the Washington Capitals finally returned to action and, much like the 2013 season in general, things didn’t really go according to plan.

The Caps traveled to Tampa Bay to take on the Lightning and the game remained competitive for the first two periods. But the Lightning got better as the game went on, while the Capitals struggled to match the play of their divisional rival and dropped the season opener in disappointing fashion, 6-3.

The game was tied heading into the third and final period, but Tampa scored three times in the final frame – twice on the powerplay – to ensure Caps goalie Braden Holtby and friends left town disappointed.

After the game, Lightning coach Guy Boucher said something that really drove home some of my biggest fears heading into this abbreviated season.

“I really believe in game shape and chemistry … we focused so much on it,” he said. “You could feel it at the end of the second period. I really believe that was the difference.”

While Boucher’s comments were intended to focus only on his team, they say an awful lot about the state of the current Capitals as well.

In my season preview, I cautioned Caps fans to lower their expectations for this strike-shortened season.

The combination of a first-time coach trying to implement a brand-new system in less than two weeks and a locker room full of athletes trying to get into playing shape after a lengthy layoff was concerning enough for me to wonder just how long it will take the Capitals to hit their stride.

For 40 minutes of hockey, Washington appeared to be able to get by on adrenaline and instincts, but during the third and final period, the Lightning proved to be the better team.

When the game was on the line, Tampa Bay was the well-oiled machine that was able to rise to the occasion while the Capitals looked like a collection of players trying to become a team.

Not only was Holtby less than stellar in his ’13 debut – surrendering a career-high six goals on 34 shots – but the team’s defense and penalty kill was equally rocky.

Three of Tampa’s final four goals came on the man advantage, which is obviously unacceptable for multiple reasons.

For starters, any team attempting to kill seven powerplays is asking for trouble.

With players such as 60-goal scorer Steven Stamkos, as well as Martin St. Louis and Vincent Lecavalier, the Lightning have too much top-tier talent to give that many chances.

The Capitals looked to be a step slower than Tampa Bay during stretches of the season opener, which might help explain why the Lightning enjoyed seven powerplay opportunities. When one team is struggling to keep up with the other, there’s a tendency to clutch and grab the opponent rather than watch them blow by you.

“I think some of the mistakes came from conditioning,” said Caps coach Adam Oates. “We got tired at times. The game went in waves.”

Add in the fact that none of Washington’s defensive players opted to play hockey elsewhere during the lockout, so they’re all essentially jumping off their couch after a four-month layoff and back into hockey overnight and that’s a dangerous combination.

Surprisingly though, all seven penalties were called on Caps forwards. The strength of this team has to be the forwards – especially while the defense is scrambling to get back into shape and the goaltending situation sorts itself out.

By this point, it’s safe to say Holtby is a known commodity in Washington. He’s a young and streaky goalie who can absolutely steal a game for his team at times. But streaky goaltending works both ways, and he was far from his best against Tampa.

Holtby faced just two shots on net in the first nine minutes of action. Tampa scored on both of them.

As a hockey player who has played alongside a streaky goalie for nearly a decade, I can tell you with certainty that it’s tough for any team to not get down when the first two shots of the game end up in the back of your net.

No matter how amped you are at the start of a game, it’s tough to overcome the huge momentum shift when your goalie has such a rough opening period. Just getting back into the game took its toll on the players, who were forced to expend extra energy just to tie the game back up and then wore down as the game dragged on.

That being said, there’s no reason to write off an entire season after just one game. Even after the team’s sluggish start, there is reason for optimism as the Capitals return to action tonight.

The Caps have won 10-straight home openers and haven’t dropped their opening game at the Verizon Center since the 2000-01 season.

It should also be noted that since the team laid such an egg in Tampa, the hope is that things can only improve from here.

Players will get another game of experience in Oates’ system and another game to improve their conditioning, and just as importantly, the hometown crowd will be there to provide motivation as the game goes on. If that’s not enough to get these players going, then we really might want to start to panic. Let’s hope it doesn’t get to that.