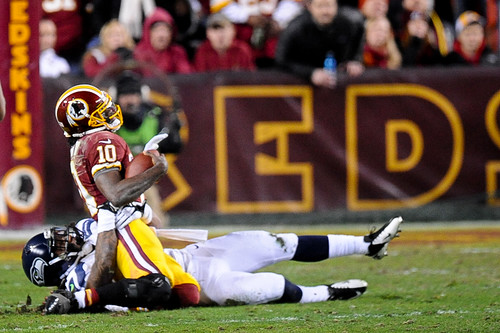 It’s too soon to know exactly how long this surgery will sideline Griffin for, but the popular opinion seems to be that it’ll take between six to eight months for the Heisman Trophy winner to return to action. The biggest question now becomes — will RGIII still be RGIII after this procedure?

Obviously that hinges on what Dr. James Andrews finds once he begins working on the 22-year-old’s knee, so ‘Skins fans would be wise to avoid all of the talking heads and so-called experts who are overly eager to share their opinion without … you know … actually having anything to do with this particular athlete and this particular knee injury.*

*Please allow me to vent for a moment — many of these same talking heads who are standing on desks and screaming into the cameras because the Redskins allowed Griffin to remain in a playoff game are the same mouth-breathers who took the Washington Nationals to task for shutting down Stephen Strasburg at the end of last season. You see, they don’t actually stand for anything. They just like to hear themselves talk and are more than happy to contradict their previously stated stance if it means 60 more seconds of airtime. In related news, I despise these people.

Interestingly enough, after reviewing game film, Redskins head coach Mike Shanahan and team doctors now believe that Griffin wasn’t injured on the play where he had to awkwardly reach down to try and collect the bad snap by center Will Montgomery.

Shanahan told the NFL Network Tuesday night that he believes Griffin was injured one play earlier when his franchise quarterback was brought down awkwardly by Seahawks linebacker Bruce Irvin.

Of course, RGIII was clearly less than 100 percent well before that play, but Shanahan believes that play was the one that did the most damage to Griffin’s knee.

As best as I can tell, Griffin’s night took a turn for the worse when he attempted to make an otherwise routine throw on the run with 3:23 left in the first quarter. He came up limping after that pass attempt and it was pretty clear that he aggravated something in his right knee on the play.

While it’s far too early to speculate if Griffin will be able to take the field for the 2013 season opener, it’s not soon for owner Daniel Snyder and the rest of the decision makers at Redskins Park to begin seriously considering what can be done to improve the playing conditions at FedEx Field.

That’s putting it kindly. As someone who stands on the sidelines during Redskins games — both home and away — I can confidently tell you that the playing field at FedEx Field is easily one of the worst in the entire NFL.

And I’m not the only one who believes the home team’s playing field is awful.

“It was horrible,” said Seahawks coach Pete Carroll. “It’s a horrible field. It’s as bad as a field can get for being dry. It’s too bad. It really is. It’s too bad. We deserve better.

“It just was worn out,” he continued. “There was a lot of slipping and all that kind of stuff. It’s relative. It didn’t change the game at all in my opinion because it’s relative to both sides. We should just expect to see a better field at that time of year.”

Carroll, of course, is peeved because one of his defense’s better players — defensive end Chris Clemons — is now done for the year with a torn ACL and meniscus in his left knee that his agent firmly believes was caused because of the field Clemons was forced to play on.

When players from both teams in a playoff game are lost to knee injuries, it’s not unreasonable to begin questioning if the playing surface at FedEx Field is a hostile work environment.

Take a look at this photo of an otherwise routine play involving Redskins receiver Leonard Hankerson during the second half. Specifically, look at the condition of the field itself.

It should be noted that Hankerson isn’t especially fast and wasn’t doing anything out of the ordinary on this particular play, and yet, the field looks like it was used during the filming of Saving Private Ryan.

And this isn’t an isolated incident either. Here is an image I captured last December when the Redskins hosted the Minnesota Vikings. Here’s another shot from the Redskins-Patriots game. In short, the playing field at FedEx Field has been garbage for a while now.

But it shouldn’t be that way. With speedy players such as Griffin, Pierre Garcon, Aldrick Robinson and others, this team’s playing surface should be suitable for a track meet. When you have one of the fastest teams in the NFL, why wouldn’t you want to take advantage of it? Why not put them in the best position possible to outrace the competition?

Even if the field didn’t actually have anything to do with the injuries Griffin and Clemons suffered, I think we can all agree that playing on such a pitiful surface couldn’t have made the situation any better. Now, the face of the franchise is facing a lengthy recovery time before he can attempt to pick up where he left off.

During that down time, it would be wise for Snyder to do some serious soul searching and figuring out if there’s anything that can be done on his end to try and protect his team’s most valuable asset.

With a month left in the regular season, Griffin set an NFL record for most player jerseys ever sold in a single season. It’s clear he’s a one-of-a-kind talent who millions of people enjoy watching play on Sundays. So please, do whatever you can to keep him healthy and productive for as long as humanly possible. If that means coming out of pocket to improve the surface he plays on, then so be it.

[Update: Check out this video shot by Seahawks fullback Michael Robinson before the game. It clearly shows how awful the field was before warm-ups even began.]