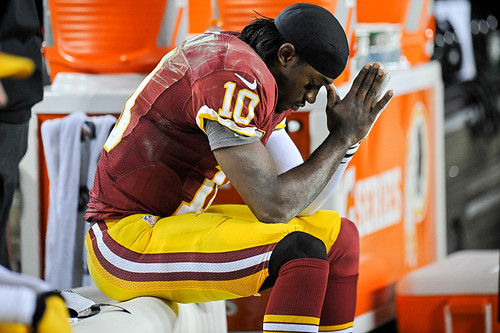 Coming into their wild card match-up against the Seattle Seahawks, the Washington Redskins had a pretty clear and straight forward game plan.

On defense, they wanted to do their best to neutralize running back Marshawn Lynch — making Seattle one-dimensional and putting added pressure on a rookie quarterback playing on the road in his first-ever postseason game.

On offense, the Redskins wanted to keep the opposition guessing by getting running back Alfred Morris involved early and often and thus allowing quarterback Robert Griffin III the luxury of handing off to Morris, keeping the ball himself or utilizing play action to stretch the field.

And for 15 minutes, that plan was perfect. Morris, once again running with a purpose, picked up nine yards on each of his first two carries en route to gaining 49 yards on just eight carries in the first quarter.

At the same time, Griffin completed six of nine passes for 68 yards with two touchdowns in the first quarter and the Redskins jumped out to a huge 14-0 lead after the first frame.

Conversely, Seahawks quarterback Russell Wilson completed just two of three passes for 20 yards and Lynch carried the ball twice for five yards and this game seemed on the verge of becoming a blowout as the Redskins outgained Seattle 129-9.

It wasn’t just that Washington was leading 14-0 after the first quarter that was impressive — it was how they were getting the job done that really stood out.

Role players like back-up running back Evan Royster and tight end Logan Paulsen were the guys who stepped up and scored touchdowns, as opposed to bigger names like Pierre Garcon or Santana Moss. On the other side of the ball, safety Reed Doughty picked up two sacks and nearly hauled in an interception in the end zone. Linebacker Perry Riley and cornerback Josh Wilson also picked up sacks as the defense dropped Russell Wilson five times on the day.

With everything clicking on both sides of the ball and so many blue-collar players rising to the challenge, it just felt like Washington’s night.

3. “Broken Again” by Another Animal

Unfortunately for the burgundy and gold, everything took a turn for the worse when Griffin attempted to make an otherwise routine throw on the run with 3:23 left in the first quarter. Griffin came up limping after that pass attempt and it was pretty clear to anyone watching that he re-injured his right knee on the play.

For the rest of the game, Griffin was no longer RGIII — the superhuman rookie quarterback who captivated NFL fans across the country. He was a battered and bruised quarterback trying his hardest to will his team to victory on a night when even the simplest plays looked impossible because of how much he was affected by the injury.

Against Philadelphia, Griffin was able to stand in the pocket and pick apart the defense with his arm. Against Seattle though, the injured knee was causing Griffin to miss his intended target more times than not. And forget any play that involved Griffin running the ball. For one night, he looked about as mobile as an over-the-hill Mark Brunell did during his final days in D.C.

And yet, Griffin remained in the game for as long as his body held up.

In the days and weeks to come, plenty of people will second guess Shanahan’s decision to keep Griffin in the game. Listening to Griffin’s post-game comments, it’s easy to see why his coaches believed he could still lead his team to victory on a night when he was clearly less than 100 percent.

“I’m the quarterback of this team,” he said. “My job is to be out there if I can play. And to answer the next question, no, I don’t feel like me being out there hurt the team in any way. I’m the best option for this team, and that’s why I’m the starter.”

Rookie or not, I fully believe Griffin has earned the right to stay in the game if he truly thinks he’s capable of playing at a high level. When a leader like him or middle linebacker London Fletcher says they can play through the pain, I tend to believe them. Clearly the same can be said of Shanahan.

“Very tough decision, and you’ve got to go with your gut,” Shanahan said. “I’m not saying my gut is always right. I’ll probably second-guess myself.”

And yet, I still can’t help but think that Griffin shouldn’t have been in the game. I’m not going to play Monday morning quarterback and use hindsight to call out the Redskins coaching staff for leaving a wounded Griffin in the lineup. But those who do choose to go that route will have plenty of ammunition.

With the offense completely unable to do anything, the defense needed to remain perfect if Washington was going to be able to close out the Seahawks.

Seattle got better as the game went on and beat the Redskins with the same blueprint the home team started the game with. Lynch became harder and harder to tackle, and then Wilson picked his spot to tuck the ball and run himself.

The Seahawks scored 24 consecutive points and now the Redskins head into an offseason with a bad taste in their mouth even though the team put together an improbable seven-game winning streak just to qualify for the playoffs.

5. “War On The Inside” by Another Lost Year

This game felt all-too familiar. In fact, if you look closely enough, you can’t help but notice some disturbing similarities between this contest and some of the team’s previous playoff affairs.

In 2005, the Redskins jumped out to an early 14-0 lead against the Tampa Bay Buccaneers and then had to fight like hell to hold on because the offense really struggled to move the chains. Obviously the ending played out differently this time around, but you get my drift.

In 1999, a bad snap at the worst possible time doomed the Redskins against those same Buccaneers. On Sunday, a low snap by center Will Montgomery put Griffin in a bad spot and ultimately ended his season after he further injured himself while trying to secure the football.

In 2007 and again on Sunday, the Redskins put together a magical run to qualify for the postseason on the final day of the season, but simply ran out of gas against the Seahawks in the opening round of the playoffs.

With so much of this game feeling familiar to me, I’m probably able to handle it better than most ‘Skins fans at the moment.

For two months, this team and — and specifically this rookie quarterback — seemed capable of anything. Since the bye week, seemingly every decision made on and off the field has been flawless. And then, just went everyone is started to warm up to the idea that this Redskins team might be truly capable of something special, the season is over in an instant.

That’s a tough pill to swallow. I get that.

But do yourself a favor and try not to overreact in the days following this disappointing loss. At 3-6, no one thought this team was destined for the playoffs. That’s what’s great about sports — just when you’re ready to write them off, the Redskins go and put together one of the best stretches of play in 20 years.

Don’t forget that. So rather than beating yourself up about the loss or calling for the firing of everyone involved, try to enjoy the ride this year’s team took you on and pray like hell Griffin’s MRI doesn’t show anything too serious.