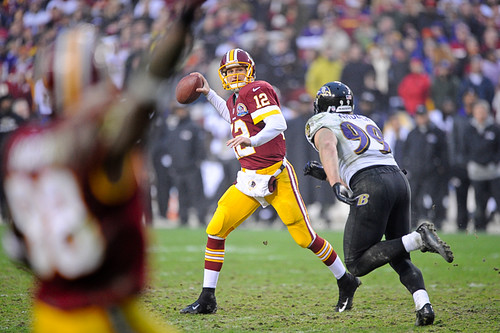 Fans of the Washington Redskins got to see what rookie quarterback Kirk Cousins was all about when he was forced to fill in for an injured Robert Griffin III in the final two minutes of a December game against the Baltimore Ravens.

The 24-year-old was thrust into action with his team trailing by eight points and the game on the line after Griffin suffered a knee injury on a hit by Ravens defensive lineman Haloti Ngata, and he promptly led the Redskins to a thrilling come-from-behind overtime victory.

Cousins’ clutch performance enabled the Redskins to keep their playoff hopes alive and ultimately helped pave the way to Washington’s first NFC East title since 1999 – which is funny, because the Barrington, Illinois native hadn’t even started playing tackle football yet the last time the burgundy and gold reigned supreme in the division.

Cousins didn’t begin playing tackle football until the following year when, as a sixth grader, he finally convinced his parents to let him give it a shot.

“Out in the suburbs where we lived in Chicago, Walter Payton and Mike Singletary lived in that area and both had decided they wouldn’t let their kids play tackle football until they were older,” Cousins said. “They had both played football for so long, gotten beaten up so much and knew the pounding that you take as a football player and felt like you could still learn the rules of the game playing flag football or playing in the backyard. So when guys who played in the NFL and are Hall of Famers are encouraging my dad to not push it too early, my dad listened.”

While his playing days might have started a little bit later in life than other kids, it didn’t take Cousins long to catch up.

“I was never the best athlete,” he said. “I was always a good athlete, but I was never the fastest, the biggest or the strongest. But like my dad always told me, I just have a knack for throwing a football. There’s just something about the nature of throwing a football that came very natural to me. I never really had to work on it and no one has ever told me to change or fix my throwing motion. People just say the way I do it is a good way to do it.”

When he was 13, Cousins’ family moved to Michigan and immediately began searching for a high school with a top-notch football program. Well, things don’t always go as planned and Cousins ended up at Holland Christian School, which wasn’t exactly a dynasty in waiting.

“We were looking for a school system with a good football program because that’s what I knew I wanted to do,” Cousins said. “The school I ended up at though had just started football. As a result, it was still in the early stages and we weren’t very good, the coaching staff wasn’t very experienced and we had to kind of learn on the fly. I had a great experience, but I didn’t really have that powerhouse football experience that a lot of the guys in the NFL probably had.”

Making matters worse, Cousins suffered an injury in his very first game of varsity football during his junior year.

“You dream of playing varsity football,” he said. “With no guaranteed scholarships and in my first game on varsity, I get hit and break my ankle. I had to sit out the rest of the season and it really set me back and hurt me with recruiting.”

By the nature of the position, quarterbacks are going to get hit. They’re going to be knocked down. The good ones get back up and find a way to overcome adversity. Even at an early age, Cousins proved this was one of his biggest strengths.