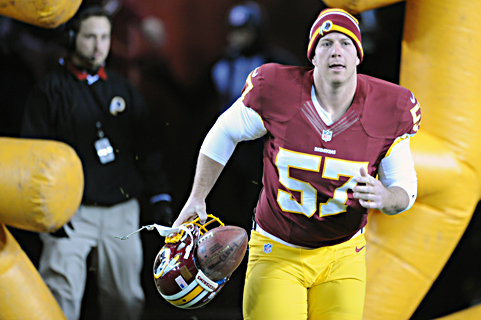 Before the 2012 season, expectations were admittedly low for the Washington Redskins.

Sure, they had just landed the highly-touted Heisman Trophy winner Robert Griffin III to solidify the quarterback position, but that didn’t stop the so-called “experts” at ESPN The Magazine from predicting a 2-14 record for Washington this season.

Thankfully, the burgundy and gold were leaps and bounds better than that. Even after losing all of that salary cap space to commissioner Roger Goodell and the NFL mafia and with a paper-thin secondary and injuries to several key contributors, Washington was able to circle the wagons and win the NFC East for the first time since 1999.

How did the Redskins go from worst to first for the first time in franchise history? The answer might surprise you.

It all started when the team was forced to place long snapper Nick Sundberg on injured reserve after the third-year pro broke his left arm against the New Orleans Saints Week 1. You see, even though Sundberg suffered the injury at the end of the first half, he continued to play the rest of the game with a broken arm.

As you might imagine, this impressed the football gods.

Because the Redskins placed Sundberg on the injured reserve under the newly-established category of “designated to return,” it meant that rather than shutting down the 25-year-old after just one game, they were able to shelve him for eight games and then he was eligible to return to action.

What a decision that turned out to be, because, for my money, Sundberg was unquestionably the team’s most valuable player in 2012.

But Sundberg brought something to this franchise that no one else — RGIII and Morris included — could match. He brought a guaranteed victory each and every Sunday he was on the active roster.

With the football gods planted firmly in his corner, Sundberg led the Redskins to a perfect 8-0 record this year when he was in the lineup. Without him, Washington went just 2-6.

So with apologies to guys like Griffin and Morris, my vote for the team’s most valuable player goes to Sundberg.

“I can’t really explain it,” Sundberg said. “I think the bye week was just really, really good for us. It was a time when we were all able to step away from football all together and kind of regroup individually and as a team. I think everybody came back focused and it’s been a real team effort all the way through.”

While it’s admirable that Sundberg would want to be diplomatic and share the glory, I wasn’t buying it.

Thanks to the new injured reserve loophole, Sundberg was able to return to action when his team needed him most. Does he realize how fortunate he (and not to mention his team) is to be able to get to come back?

“Oh, every day. It’s unreal,” Sundberg said. “More and more now. I mean, this has been the most fun I’ve had ever playing football. The excitement around the locker room is unmatched to anything I’ve ever seen before. We’re having a great time and I think it shows on the field. Our guys are excited to be out there and they’re excited to play every week.”

Okay, I get it. He doesn’t want to overshadow his teammates, so the guy is going to continue to try and be diplomatic about it. In Sundberg’s opinion, how did this team magically transform from a 3-6 underachiever to a divisional champ now hosting a playoff game at FedEx Field for just the second time in the stadium’s history?

“I think we’ve got great leadership all the way around,” he said. “From the young guys to the older guys, we’ve got phenomenal leadership on this team and everybody listens when guys like Barry Cofield, London Fletcher and Stephen Bowen talk because they’ve been through these situations before and they know we’ve still got a long way to go. They keep us humble, but still excited and hungry at the same time. The leadership is better than it’s ever been before during my time here.”

Does Sundberg realize that if his arm had helped up against the New Orleans Saints, this Redskins team might very well have gone 16-0 this season?

(Laughs.) “Well, you can’t look back on that,” Sundberg said. “Unfortunately, my stinking ulna in my left arm isn’t as strong as it should be.”