how the redskins defense saved the season 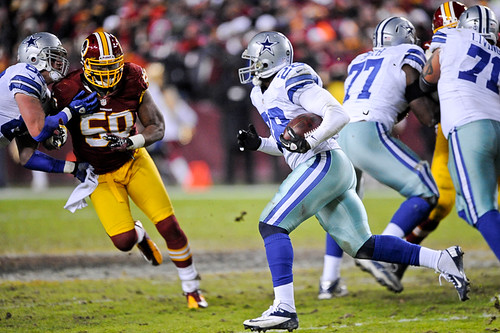 Well, the 2012 NFL season has come to a conclusion and yet, the Washington Redskins still live to play another day.

Thanks to a remarkable seven-game winning streak, the Redskins claimed their first NFC East division title since ’99 and will now host just the second playoff game in FedEx Field’s miserable history this Sunday when the Seattle Seahawks come to town.

While most of the world is quick to praise the immensely-talented tandem of quarterback Robert Griffin III and running back Alfred Morris, it would be foolish to assume this magical run has come solely because of those two rookies. Which is why Grantland’s Bill Barnwell wrote a column this week suggesting Washington’s improved defense is the biggest reason the team made it to the postseason.

Washington’s improvement, meanwhile, owes more to its defense than you might expect. It’s a leap I wrote about earlier in this run, but the numbers bear out that the Redskins’ defense has had more to do with their big playoff run than has the offense. During their 3-6 start, the Washington offense averaged 25.1 points per game, a figure that improved to an even 30 during the 7-0 finish. That’s a 4.9-point difference. Meanwhile, the Washington defense went from allowing 27.6 points per game during the rough seas of September and October to an even 20.0 points per game after Election Day, a difference of 7.6 points. Plenty of those points came in garbage time against the Cowboys on Thanksgiving Day, too, so that figure even understates the genuine improvement this unit has made over the final seven weeks of the year.

How did they get better? Well, the obvious indicators don’t show any notable changes. Washington forced 16 turnovers through nine games, an average of 1.8 per contest and a figure that rose slightly to 2.1 turnovers per game over their final seven contests. That’s not it. They’ve been bad on third down on both sides of the divide, allowing opposing offenses to convert 43.8 percent of the time during the 3-6 run (which was seventh-worst in the league), a figure that’s up to 45.6 percent after their bye week. Their dismal first-down pass defense allowed 8.8 yards per pass attempt during the first nine weeks of the year, a figure only topped by the Saints and Chiefs. Their more recent run has seen them allow a more respectable 6.8 yards per throw. Their sack rate has also improved from 3.8 percent to 6.0 percent. The steps above that are positive all help a little bit, but not enough to single-handedly change the Redskins, who seem to be getting better out of sheer will.

With that in mind, I talked to nose tackle Barry Cofield to try and gain some perspective from the vocal leader on just what has changed on his side of the ball to allow defensive coordinator Jim Haslett and friends to save a once-sinking ship.

“I don’t even know if I can put it into words,” he said. “We never felt like we were out of it. We still had our playoff aspirations, but to clinch the division outright and have a 10-win season, that was a long way off in the distance. The biggest thing is we took it day by day and game by game, and this is the culmination of it. It was a lot of hard work though. No one wants to hear about the labor pains — they just want to see the baby. But there was a lot of hard work, a lot of hours in meetings and extra hours on the practice field and it was just a great job by our coaching staff and our players to peak at the right time.”

In years past, the pressure from the spotlight of playing for a postseason birth on the last day of the regular season with the entire football-loving world watching probably would have been enough to make the Redskins crumble. After all, when the going got tough, Washington typically wilted.

“We’ve definitely grown,” said Cofield. “It was a shock to our system when we lost Brandon [Meriweather] and Brian [Orakpo] and Adam [Carriker] and Tanard [Jackson] — all of these guys who were flashing this playmaking ability all spring and summer long. It hit us hard and it wasn’t until the bye week, I think that us and the coaches had a chance to get away from it and really think and devise a plan for how we were going to make up for the losses. Since then, for the last seven weeks, they’ve come up with a completely different plan every week. We’ll come in with a ton of blitzes on Wednesday and sort through them, figure out what works and go into the game on Sunday with a plan we all believe in.”

Simply put — this coaching staff and these players are attempting to prove to the world that victories like the 28-18 win over Dallas signify the dawn of a new day with the burgundy and gold.

“This is a new Redskins team. This is a new era,” Cofield said. “We’ve had great eras in the past, with Joe Thiesmann and John Riggins — they had their era of dominance — and since then there have been lulls and peaks and valleys. But this is a new era and I think the organization is in a great place. I think I came from a good organization and I feel strongly about this one. Mr. [Daniel] Snyder has done a great job of getting great pieces in place and [general manager] Bruce Allen and Coach [Mike] Shanahan are just guys you want to play for. They’re guys who inspire you and make you want to run through a wall for. That’s half the battle in professional football.”

It’s fitting that Cofield referenced Hall of Famer Joe Gibbs and the glory days, because Washington’s blueprint for beating the hated Dallas Cowboys in the season finale was eerily familiar to longtime ‘Skins fans. The coaching staff relied on a healthy dose of running the football and aggressive defense to keep the season going, both of which were staples of the most successful era in Redskins history.

“That’s the formula that Coach Shanahan still preaches today,” said Cofield. “That’s why we’re in this 3-4 defense. That’s why we’re trying to be physical and stopping the run. That’s why the put a guy like Alfred [Morris] out there and they have the offensive line that they do. It’s just beautiful to watch as a defensive lineman sitting on the sideline and watching those guys just chew up the clock. I know how demoralizing that is. But that’s our formula. We’re still a ground and pound team.”

What were the Redskins doing with their schemes and blitzes to do such a remarkable job of pressuring Cowboys quarterback Tony Romo?

“We had a great plan devised by Coach [Jim] Haslett and his staff,” Cofield said. “It was unique. I spent a lot of time occupying blockers, occupying the center and spying on the backs. I did more of that than I’m normally accustomed to, but if it works then you’re okay with it. Sometimes you’ve got to be selfless and just buy into the plan. Every week they come up with something new and a different guy might be featured, and you just have to fill your role. When guys buy into it and it works, it’s a thing of beauty.”

Which is why, even after outside linebacker Rob Jackson hauled in that timely interception in the final few minutes of the game, the mindset never changed on the defensive side of the ball.

“I still thought we were going to have to make another stop,” said Cofield. “I’m just that type of guy. You know, every time we get a stop, I think about the next one. Everyone else is celebrating and somebody’s got to be that pessimist. But I was so happy for Rob. He’s a playmaker. He’s done it throughout these last seven weeks, so you couldn’t write a better ending.”

If you stop and think about it, Jackson is the perfect player to illustrate just how much the Redskins defense has changed from Week 1 until now. He started the season as an afterthought, went through some growing pains as he tried to learn on the fly and then, when it mattered most, rose to the occasion. It’s because of unheralded guys like Jackson that the Redskins are back in the playoffs for the first time since ’07 and the Seahawks would do wise to keep that in mind when they come to town.