photos from the sidelines: week 17 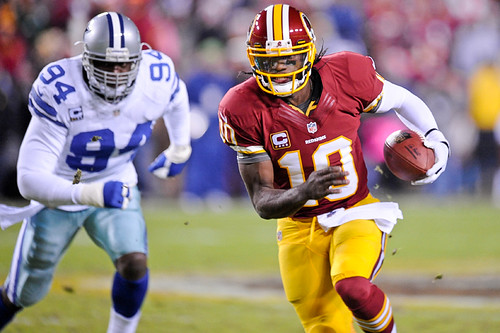 The Washington Redskins did the unthinkable Sunday evening — they not only rose to the challenge of playing against their hated rival on a national stage with a playoff birth of the line, but they managed to exceed expectations in the way they handled the Dallas Cowboys.

Their 28-18 victory was a blast from the past, as the Redskins ran up and down the field en route to their first NFC East title in 13 years.

“It’s safe to say, I’m the happiest guy in the room,” said Redskins quarterback Robert Griffin III. “I was 9 years old in 1999. So I stand before you at 22, and the Redskins are the NFC East champions. To me, talking to Alfred after the game, it’s the first time the Redskins have been champs since ’99 and we came in and we did it in one year. The sky’s the limit for this team.”

Alfred, of course, is Redskins running back Alfred Morris, who rushed for 200 yards and three touchdowns in the biggest game of his young career. He too, was in elementary school the last time Washington was good enough to win a division title — which is seriously depressing when you stop and think about it.

But this isn’t a time to linger on the sad days. This is a time to celebrate the improbable journey this year’s Washington Redskins have taken us all on. Thanks to a magical seven-game winning streak, Washington will now host a home playoff game for just the second time in FedEx Field history.

So with that in mind, please feel free to peruse my favorite photos I was able to capture from the sidelines this week. After all, there’s something truly enjoyable about watching the Dallas Cowboys fall flat on their collective faces on a national stage.