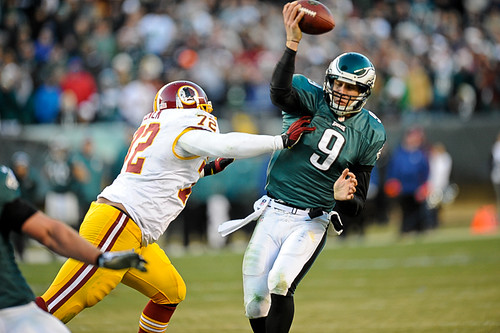 For the briefest of moments, it absolutely appeared the Washington Redskins were going to do their best to ruin the holidays.

That’s because, for the briefest of moments, it appeared that Philadelphia Eagles quarterback Nick Foles had completed a third-down pass to receiver Jeremy Maclin, who was wide open in the right corner of the end zone.

Fortunately for the burgundy and gold, the rookie quarterback didn’t get enough on the pass and the ball skipped just short of his intended target — giving the Redskins another chance to close out the game.

Had the Eagles completed that play, more than a few Redskins players believed there was no doubt Philadelphia would have gone for a two-point conversion rather than attempted an extra point and played for overtime.

In the end though, Foles missed on that golden opportunity and three plays later was whistled for an illegal forward pass to end the game, thanks to pressure by Redskins defensive end Stephen Bowen.

It wasn’t always pretty, but the defense — which finished the game with a season-high five sacks and also created two turnovers — found a way to do just enough to lead the Redskins to a nerve-wracking 27-20 victory over the Eagles.

In other news, Redskins quarterback Robert Griffin III returned to action after missing last week’s game due to a knee injury.

To help prevent further injury, the Heisman Trophy winner wore a bulky knee brace against the Eagles and also appeared content to be much more of a standard pocket passer than usual. But while RGIII carried the ball only twice for a total of four yards, he still remained productive — completing 16 of 24 passes for 198 yards with two touchdowns, one interception and a QB rating of 102.4.

“Anytime you wear a brace, it’s going to restrict your motion,” Griffin said. “It didn’t slow me down by any means. I felt like myself out there. That’s why they call me quarterback. It’s not abbreviated with running quarterback. I have to throw the ball and assist guys by handing off.”

While it’s understandable that Griffin feels like the brace didn’t slow him down against the Eagles, it was clear throughout the contest that he was more of a sitting target than usual. Griffin was able to roll out when defenders came closing in, but he definitely seemed content to stay home and beat Philadelphia with his arm.

For one week at least, the Redskins were able to get by without RGIII at 100 percent. But if this team is going to continue to showcase one of the most exciting offenses in all of football, they’re going to need Griffin to do more than drop back in the pocket.

Without Griffin to help move the chains with his feet, the Redskins needed another solid outing from rookie running back Alfred Morris.

As has been the case all season long, Morris was more than capable of answering the challenge.

The Florida Atlantic product carried the ball 22 times for 91 yards and a touchdown — giving him 10 rushing touchdowns on the year.

Morris now has 1,413 rushing yards this season, the fourth-highest total by a Redskin in a single season. His total marks the fifth time in team history that a player has rushed for at least 1,400 yards in a season (Clinton Portis and Stephen Davis each accomplished the feat in two seasons)

Speaking of Portis, Morris needs 104 rushing yards next week to break Portis’ team record for rushing yards in a single season. Portis is already on record as saying he hopes Morris breaks his record. Now it’s up to the youngster to make it happen.

Since the moment he came to Washington, kicker “Cobra” Kai Forbath has been money in the bank. Sure, his kickoffs sometime fail to reach the end zone and give opponents a chance to get solid field position, but he more than makes up for it every single time he lines up to attempt a field goal.

With two successful field goal attempts against Philadelphia Sunday, Forbath has officially had the best start for a kicker in NFL history, after breaking Saints kicker Garrett Hartley’s NFL record for consecutive field goals made to start a career (16).

Considering former Redskins kicker Billy Cundiff missed roughly 37 attempts against the Tampa Bay Buccaneers earlier this year and just how narrow the margin for error has been, at times, during this season, it absolutely goes without saying that Forbath has been a vital member of the Redskins in 2012.

5. “Do You Want To” by Franz Ferdinand

Well, it all comes down to this, boys and girls.

Thanks to the first six-game regular season winning streak since 1996, your Washington Redskins can clinch their first playoff berth since ’07 and, more importantly, their first NFC East title since ’99 with a win at home next week against the hated Dallas Cowboys.

Oh, and a win next week would ensure a home playoff game at FedEx Field for just the second time in the stadium’s history. But in order to make that a reality, the Redskins must defeat their biggest rival, the Dallas Cowboys.

The game has already been flexed to prime time, meaning once again the rest of the country will get to sit back and watch these two rivals do battle on a national stage. The Redskins won on Thanksgiving. The Cowboys will obviously be playing for revenge, as well as a chance to crush Washington’s playoff hopes.

If Hollywood was doing a movie based on this season, they couldn’t have scripted it any better. Now, the Redskins just need to finish what they started.