photos from the sidelines: week 16 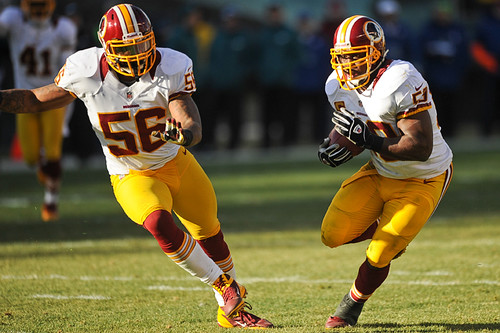 There was a point in time earlier this season when fans of the Washington Redskins were forced to cringe and avert their eyes whenever the defense took the field.

Thanks to a paper-thin secondary and a nonexistent pass rush, Washington’s defense struggled to do much of anything right during the first half of the 2012 season and the Redskins looked dead in the water at 3-6. But then a funny thing happened.

The team used the bye week to regroup and refocus on both sides of the ball and now, the defense isn’t so terrible anymore. During the team’s current six-game winning streak, Washington has continually found a way to make mid-game adjustment and has actually started to pressure opposing quarterbacks from time to time.

Against Philadelphia, the Redskins defense had a field day — sacking rookie quarterback Nick Foles a season-high five times while also creating two turnovers. Sure, they still went out of their way to make the ending much more dramatic than it needed to be, but the defense found a way to close out the game and keep the playoff hopes alive.

That alone is enough to make the holidays happy in our nation’s capital, so with that in mind, please feel free to peruse my favorite photos I was able to capture from the sidelines this week.