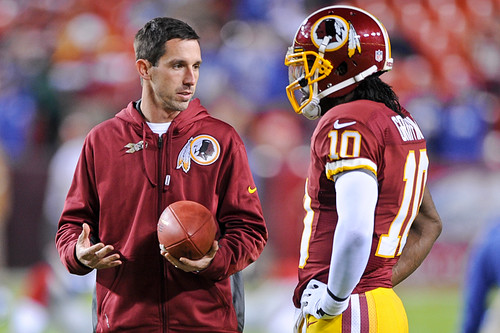 5. Pierre Garcon, receiver – Sure, Garcon was the closest thing to a big-name free agent the Washington Redskins acquired last offseason — landing a five-year, $42.5 million deal to come to our nation’s capital, but the second act of his career didn’t exactly start off as planned.

Garcon announced his arrival with a stunning 88-yard catch and run against the New Orleans Saints in the season opener, and then was basically a non-factor for the next two months thanks to a lingering toe injury. Things looked so bleak for a while there that more than a few folks were advocating shutting him down and placing him on the injured reserve list.

Thankfully, the Redskins coaching staff is more than happy to ignore the so-called experts and Garcon was able to get his groove back just in time to help the burgundy and gold make an improbable playoff run down the stretch.

In the last four games, Garcon has begun to show that he’s fully capable of being the number one receiver by hauling in 23 catches for 340 yards and three touchdowns. If the fifth-year pro was able to sustain that level of production over the course of an entire season, he’d have 92 catches for 1,360 yards and 12 touchdowns.

4. Will Montgomery, center – Be honest, unless you’re related to an offensive lineman, you went into this season believing the Redskins had a stud left tackle and a bunch of spare parts along the line.

That’s because blue-collar guys like Chris Chester, Kory Lichtensteiger, Tyler Polumbus and Will Montgomery aren’t exactly household names and the only time their names are typically ever mentioned is when someone is bitching and moaning because one of them blew an assignment.

But a funny thing has happened this season — Washington’s offensive line is no longer viewed as a complete liability and some of the guys in the trenches have even begun to earn praise instead of scorn, for their play on Sundays.

Williams, of course, continues to perform as one of the premiere left tackles in all of football. But the biggest surprise along the offensive line has been the play of the man in the middle.

Montgomery’s play has been so consistently solid all season long that he’s been a staple of ESPN’s All-NFC East team all season long and Pro Football Focus lists him as the second best center in the entire NFL (trailing only Minnesota’s John Sullivan).

3. Rob Jackson, outside linebacker – When Pro Bowl linebacker Brian Orakpo was lost for the season after tearing his pectoral muscle Week 2, reasonable people wondered if the Redskins defense would ever be able to pressure opposing quarterbacks against this year.

Conventional wisdom suggested opponents who double or triple teamed outside linebacker Ryan Kerrigan would effectively eliminate Washington’s pass rusher entirely. And for a while there, it seemed like that would indeed be the case in 2012.

Initially, the coaching staff seemed to admit that no one on the roster was capable of filling the void created by Orakpo’s loss and was prepared to play out the rest of the season with a platoon of linebackers rotating in and out of the lineup.

And then Jackson said enough is enough.

Next thing you know, the 2008 seventh-round draft pick had transformed himself from an afterthought fighting for a roster spot to Washington’s secret weapon on defense. These days, he’s basically good for a key play or two every game — like, for example, his game-changing interception on the second play of the second half in Cleveland.

Considering his college career began at some place allegedly called Fort Scott Community College in Kansas (he played there for two years before transferring to Kansas State), it’s safe to say Jackson took the road less traveled on his way to becoming an NFL player. Judging by his play this season though, it’s safe to say he’s here to stay.

2. Alfred Morris, running back – Okay, okay, I know head coach Mike Shanahan has made a career of turning guys you’ve never heard of into highly-productive running backs over night. But here’s the thing, anyone who witnessed Shanahan’s first two seasons in Washington had a right to wonder if that trait never made it out of Denver.

This season, the Redskins ground game ranked fourth in attempts, first in yards and third in touchdowns, and a large reasons for that production is Morris. Sure, having a dual threat quarterback like Robert Griffin III is obviously going to help keep defenses honest, but Morris has absolutely made his presence felt during his rookie campaign.

The sixth-round pick entered training camp with little fanfare as most people thought he’d simply be an extra body competing with the likes of Roy Helu Jr., Evan Royster and Tim Hightower for playing time. Hell, even Morris admitted he didn’t think he’d step onto the field during the first month of the season.

That’s because Morris rushes with a purpose. He’s humble, he’s hungry and, best of all, he’s thrilled to be playing for the team he grew up rooting for.

1. Kyle Shanahan, offensive coordinator – Even after the Redskins had traded away a bevy of draft picks for the chance to draft Griffin, the so-called experts remained unconvinced Washington was the ideal fit for RGIII.

The lazy narrative making the rounds in the weeks leading up to the season was that the Shanahan clan simply had too much of an ego to alter their offense to maximize Griffin’s insane talents.

If you listened to a good chunk of the national media, then you had to be all but certain the powers that be in Washington were going to ruin Griffin before he ever had a chance to show the world what he had to offer at the pro level.

And then the season started, and it was instantly apparent that those people didn’t know what in the world they were talking about. Instead of asking the Heisman Trophy winner to do his best Rex Grossman or John Beck impression, they went the other way completely — embracing all of the “gimmicky college stuff” that the experts also said could never work in the NFL.*

*Basically what I’m trying to say is — these experts aren’t really experts as all, so stop paying them any attention when they pick the Redskins to go 2-14 every year.

The absolute best development of the 2012 season has been watching a Redskins offense that never seemed to get going the previous two seasons magically transform into a well-oiled machine capable of marching up and down the field on anyway at any time.

Simply put — the rest of the NFL is forced to make their best guess what’s coming next because the younger Shanahan has turned the Redskins into the team no one wants to play.

Rumors are already circulating that Kyle Shanahan might be viewed as a potential head coaching candidate this offseason. Let’s hope that’s not the case. Not because I don’t want to see him continue to grow as a coach, but because ‘Skins fans are just now starting to see what this team is truly capable of and it’d be a shame if he was stolen away before everyone had a chance to enjoy it.