trent williams: “i want to be dominant” 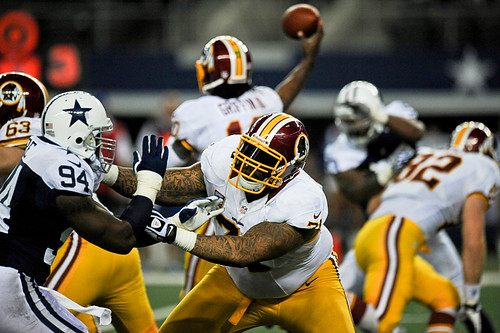 For as long as he can remember, there was only one thing Washington Redskins left tackle Trent Williams wanted to do with his life.

“Football is a huge deal down in Texas and I always knew it was what I wanted to do,” he said.

Of course, anyone who has ever spent any length of time in Longview, Texas knows that they take their football very seriously.

“Football is like a religion down there,” Williams said with a laugh. “The turnout for our high school games looked like what you’d see other places for college games. People take a lot of pride in their football there. We’d have at least 5,000 or 6,000 people at our games, easy.”

He might have been the youngest kid out there, but he was big, strong and had plenty of speed for a kid that size, so it made perfect sense that his first football coach wanted to build an offense around Williams as a running back. There was just one problem …

“I wasn’t very good,” he admitted. “I had a little bit of speed to me, so I could get away from people. But I couldn’t hold onto the ball. I definitely had some ball security issues, so I guess running back wasn’t my calling.”

Fortunately for Williams, there are plenty of positions on a football team that don’t require a player to handle the ball. His coaches moved him to linebacker and Williams did a much better job once carrying the football was no longer involved.

Through middle school he was still relatively close in height and weight to the other kids he was playing against, but by high school, Williams hit a growth spurt most kids can only dream of. By the time he got to ninth grade, Williams stood an imposing 6-foot-3 and 270 lbs. and there simply aren’t many possible positions for a kid that big to play.

So Williams, for better of for worse, was an offensive lineman. For some though, that can take a little bit of an adjustment because there’s nothing glamorous about life in the trenches. An offensive lineman can lock down a defensive end for 50 straight plays, but one mistake and that’s all anyone wants to talk about.

“We don’t play a glorified position,” Williams said. “I mean, we get a little more notice nowadays, but no one wants to be the guy who has to stay back and block. It was always the most dreadful position on the team because no one wanted to play on the O-line. And honestly, people really can’t tell if you’re a good offensive or defensive lineman until much later in high school or even college. But a lot of people still give out scholarships on sheer potential.”

Although he hadn’t played the position for very long, Williams still showed enough potential to entice his fair share of big-name college programs.

“I was pretty raw, but I was athletic,” he said. “And I had a mean streak that caught a lot of college recruiters’ eyes. I always wanted to finish my blocks and I was always getting out and blocking guys in space — taking on linebackers and defensive backs and showing that I had the athletic ability to keep up with most everyone out there on the field. I admit it though, I was very raw. I didn’t have much technique, but I was coached well by my high school coaches.”

When it became time to choose a college, Williams had plenty of options (and scholarships) to choose from. But because several other players from East Texas, including Minnesota running back Adrian Peterson and former Redskins receiver Malcolm Kelly were already at the University of Oklahoma, and because of a lack of depth on the offensive line, Williams felt the Sooners were the best fit.

And yet, none of that immediately comes to mind when the 24-year-old thinks back to his college career.