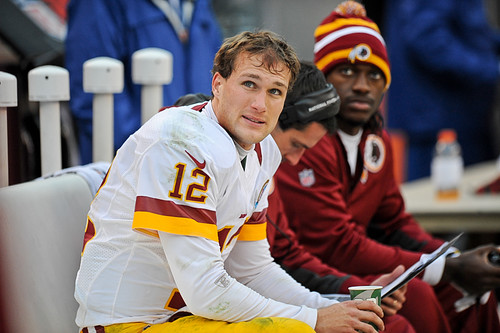 1. “Ace of Spades” by Motorhead

All season long, the Washington Redskins have been guided on a magical journey thanks to an electrifying rookie quarterback. Unfortunately though, Robert Griffin III was sidelined this week when the team traveled to Cleveland to face the Browns, thanks to a knee injury.

So the Redskins playoffs hopes now rested in the capable hands of the other rookie quarterback — Michigan State product Kirk Cousins. Against the Baltimore Ravens one week earlier, Cousins needed just two passes to earn a victory in relief of Griffin.

Chances were, he was probably going to need to do a little bit more than attempt just two passes if he wanted to emerge victorious in his first career start.

Well, things didn’t exactly start as Cousins had hoped and Washington struggled out the gate — with each of the team’s first four drives lasting just three plays.

After four possessions, the Redskins offense had amassed just two yards on 12 plays with an interception. Washington trailed 7-0 and it wasn’t unreasonable to begin to wonder if this team could win without RGIII prominently involved.

That’s when offensive coordinator Kyle Shanahan did the best thing imaginable — he took off the training wheels and let Cousins air it out. As opposed to dinking and dunking it up the field in hopes of getting the rookie’s confidence level up because of a few meager completions, Shanahan decided to attack Cleveland downfield.

Cousins completed 26-of-37 passes for 329 yards with two touchdowns (all career highs) as the Redskins rolled to a resounding 38-21 win. He completed 70 percent of his passes and had a QB rating of 104.4 and even picked up 22 yards on the ground on three carries.

Best of all, he helped proved once and for all that the Redskins aren’t just a one-trick pony. With or without Griffin, this team has enough talent to be competitive against anyone.

2. “The Nameless” by Slipknot

Cousins and Griffin weren’t the only rookies prominently involved in this matchup.

Richardson was a Heisman Trophy finalist during his highly-productive college career at powerhouse Alabama. Morris was an afterthought at Florida Atlantic that went 1-11 in his final season. But that’s the beautiful thing about sports — hype and history are meaningless.

Morris, the sixth-round pick, rushed 26 times for 87 yards with two touchdowns against Cleveland, while Richardson, the highly-regarded first rounder, was held to just 28 yards on 11 carries. As the game went on, the Redskins turned to Morris to wear down the opposition. Conversely, Richardson had just two carries for zero yards in the second half.

Now don’t get me wrong — Richardson is going to be a helluva player, but for one day at least, Morris sent a message to the so-called experts that you can’t always judge a book by its cover.

The fifth and final rookie involved in this game was Browns quarterback Brandon Weeden, who arguably had his worst game as a professional. The 29-year-old rookie completed 21 of 35 passes for 244 yards with one touchdown, two interceptions and a QB rating of 66.8.

The defense’s gameplan against the Browns revolved around neutralizing Richardson, because they (rightly) felt that if they took away the running game, Weeden wasn’t going to be able to beat them. Well, the plan worked to perfection.

Weeden never looked comfortable in the pocket, as he missed open receivers and both of his interceptions came because of a habit of staring down his intended target.

Much like with the running back battle, Washington’s late-round pick thoroughly outplayed Cleveland’s first rounder. But while the Browns know they have a franchise running back in Richardson, the jury is still out on whether Weeden is the long-term answer at quarterback.

For the first 11 games, the Redskins defense was viewed as the team’s weak link. The offense put up a ton of points and hopes their production was enough to counterbalance the defense’s inability to stop anyone.

But something crazy has happened over the last three weeks — suddenly, Washington’s defense isn’t such a pushover anymore.

The defense has done a much better job of limiting big plays and has become downright dominant in the second half.

Case in point: New York was held to three points, and Baltimore and Cleveland both scored just seven points after halftime. Although the Redskins trailed the Browns 14-10 at the break, it took the defense just two plays in the second half to turn the tide.

Linebacker Rob Jackson, who has definitely become a secret weapon on this defense thanks to his one or two big plays a game, picked off Weeden and gave his offense great field position. They took over at the 15-yard line and three plays later, the Redskins took the lead for good.

Washington went on to score touchdowns on four of the first five drives of the second half thanks to the huge momentum boost from Jackson’s interception and suddenly this defense isn’t nearly the liability it once was.

5. “Take The Power Back” by Rage Against The Machine

As insane as it sounds, the Redskins now control their own destiny over the final two weeks of the regular season. While they’re in a three-way tie with Dallas and New York for the NFC East title, they hold tiebreakers over both of their rivals.

Thanks to this five-game winning streak, the Redskins are officially a team to be reckoned with. Should they be able to remain focused and defeat the NFC’s worst team, the Philadelphia Eagles, and close out the Cowboys at home Week 17, the Redskins will host a playoff game at FedEx Field for just the second time since the stadium opened in 1997.

There’s still a lot of football to be played, but for the first time in a long, long time, the Washington Redskins are still playing meaningful games in December.