photos from the sidelines: week 15 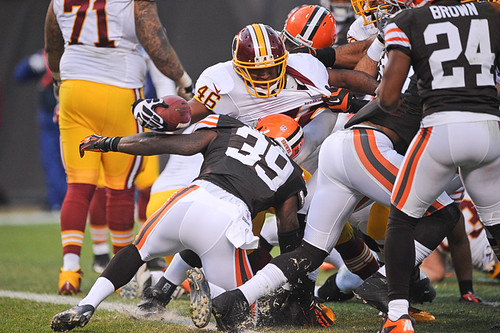 I have a confession to make — I’m a Cleveland Browns sympathizer.

I would never consider myself a fan of the Browns, but seeing them routinely finish as one of the NFL’s worst teams year in and year out has gotten me to the point where I’d like to see them turn things around.*

*And let’s be honest, it’s pretty easy for ‘Skins fans to root against Baltimore and Pittsburgh anyway, so pulling for a Browns turnaround season isn’t all that unreasonable.

Plus, a couple of my good friends happen to be diehard Browns fans, so seeing them actually enjoy an NFL season would be a nice change of pace.

Back before I started spending all of my Sundays on the sidelines covering the Washington Redskins, I used to take an annual trip with my buddies to Cleveland to see the Browns in action. And here’s the kicker — they were 4-0 in games I attended in Cleveland (before this weekend). They beat Joe Gibbs and friends back in ’04, the Baltimore Ravens in ’05, the New York Jets in ’06 and the Seattle Seahawks in ’07.

Basically, if the Redskins lost this weekend, it would have been my fault. Thankfully, it didn’t come to that.

Backup quarterback Kirk Cousins started off shaky and then settled into a groove and the Redskins cruised to an impressive 38-21 victory for their fifth-straight win.

The Redskins are currently sitting atop the NFC East division with two games remaining on the schedule, so please feel free to peruse my favorite photos I was able to capture from the sidelines this week. Lord knows this doesn’t happen very often.