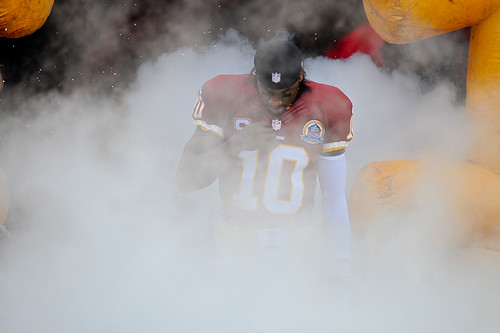 Since the day he arrived in our nation’s capital, Washington Redskins quarterback Robert Griffin III has quickly become one of the biggest names in professional sports. As with the case with every public figure in today’s society, his every move — both on and off the field — is heavily dissected and discussed ad nauseam.

He hasn’t even played a full NFL season and RGIII has already had a huge impact on the National Football League. Week after week, opposing players fall all over themselves to praise him and even curse the football gods for simply having to face a player as talented as Griffin.

And the most amazing part about this 22-year-old kid is that he handles everything with such ease and class. No matter what is thrown at him, it’s impossible to catch him off guard. He’s been in the public spotlight for years now and it’s seemingly impossible to find a single person who has anything negative to say about the guy.

As you’ve no doubt heard by now, an attention whore by the name of Rob Parker, made some inflammatory comments about Griffin on ESPN programming yesterday. For the purposes of this discussion, here’s a quick recap of what Parker said:

I talked to some people down in Washington, D.C. … friends of mine who are around at some of the press conferences, people I’ve known for a long time. But my question, which is just a straight honest question, is he a brother, or is he a cornball brother? … He’s not really, he’s black, he kind of does his thing, but he’s not really down with the cause, he’s not one with us, he’s kind of black, but he’s not really like the guy you want to hang out because he’s off to something else ….

I don’t know because I keep hearing these things. We all know he has a white fiancee, there was all this talk about he’s a Republican, which there’s no information at all. I’m just trying to dig deeper into why he has an issue. Because we did find out with Tiger Woods, Tiger Woods was like, ‘I got black skin, but don’t call me black.’ So people got a little wondering about Tiger Woods ….

To me, [his braids are] very urban, and makes you feel like, I think you’d have a clean cut, if he were more straitlaced or not like, wearing braids, you’re a brother, you’re a brother if you’ve got braids on.

Sadly, this is what passes for acceptable on today’s ESPN. I’m sure this guy, Rob Parker, will be taken off the air for a week or whatever as discipline, but make no mistake — these comments are exactly what they’re hoping to achieve with shows like First Take. Whether ESPN ever admits it or not, shows like this one are specifically designed to stir the pot.

Controversy sells, so even if the topic is something horribly inappropriate like this, they’re thrilled because people are talking about them. In fact, to the best of my knowledge, Skip Bayless is the only other person to attempt to make Griffin’s skin color an issue.

What do Skip Bayless and Rob Parker have in common? They’re both regulars on ESPN’s First Take. Coincidence? I think not.

When Stephen A. Smith, one of the biggest blowhards in the history of modern culture, is the voice of reason, you know you’ve gone too far.

“Well first of all let me say this: I’m uncomfortable with where we just went,” Smith said during the segment. “RGIII, the ethnicity, the color of his fiancee is none of our business. It’s irrelevant. He can live his life any way he chooses. The braids that he has in his hair, that’s his business, that’s his life. I don’t judge someone’s blackness based on those kind of things. I just don’t do that. I’m not that kind of guy.”

Griffin has been in the public spotlight for a while now. He made Baylor, an afterthought in college football, relevant on a national level during his Heisman Trophy winning season. In the NFL, he’s done the same thing with the once-proud Washington Redskins — who used to make headlines for winning Super Bowls, as opposed to signing terrible free agents and other off-the-field drama.

At this very moment, I would argue that the only name bigger than Griffin’s in pro sports today is LeBron James, who is in his 10th season. Griffin has been a professional athlete for just 13 games and he’s already reached that status level, thanks to his electrifying playing style and charming personality.

Best of all, Griffin has handled the spotlight as a true professional. When on camera, he’s charismatic and engaging. Behind the scenes, he’s humble and completely down to earth. It’s easy for anyone who has spent any length of time around him to see that Griffin’s parents did an outstanding job raising him.

In fact, Griffin recently sat down with Chick Hernandez of Comcast Sportsnet and spoke on the subject of being a African American quarterback in a placed affectionately referred to as “Chocolate City.” Here’s what he had to say:

“Whenever you can relate to the population of the team that you play for, I think it makes it that much more special,” Griffin said. “I don’t play too much into the color game, because I don’t want to be the best African-American quarterback, I want to be the best quarterback. But to the fans, and to the fans who think that way and look at me as an African-American, it’s important that I succeed, not only for this team, but for them. Because it gives them that motivation, that hey, you know, an African-American went out and played quarterback for my Washington Redskins. So I appreciate that, I don’t ever downplay anything like that. Whoever I can go out every week and motivate to do better and to try to go after their dreams, I’m up for that.”

It’s too bad the people at ESPN are only concerned with the color of Griffin’s skin. If they actually stopped blabbering about nonsense and got to know him a little bit, they could actually learn something about class and being a positive role model. Sadly, that doesn’t appear to be an option at the self-proclaimed Worldwide Leader in Sports.