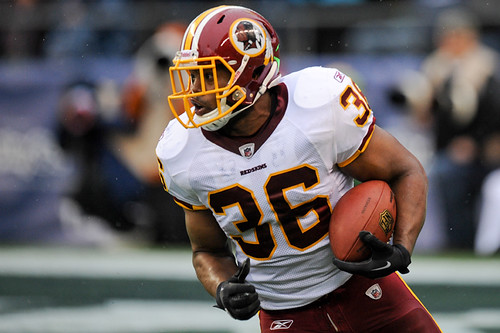 Like most Americans, the holidays are a special time for Washington Redskins fullback Darrel Young.

Growing up with his parents and his older brother David, Young remembers staying up until 11 p.m. on Christmas Eve to try to sneak a peek at his mom wrapping presents, then getting up at 3:30 a.m. and trying to wake the rest of his family so he could start unwrapping them as early as possible.

Family is very important to Young and, looking back, he realizes how special those Christmases together with the rest of his family truly were.

“I had a father and a mother and a home. They’ve been married for 30-plus years. Any time you have parents like that, they set a foundation,” he said.

Young remembers his house always being immaculately decorated. From the tree – which the 25-year-old insists has to be real – to the lights and ornaments, the Young household was filled with festive decorations. And it still is to this day.

“My dad does so much, I swear sometimes it looks like a Macy’s tree,” Young said. “Just the lights, the ornaments, he does the whole nine yards. My yard’s always lit up. We have reindeer. Every tree is decorated. The walkway is decorated with lights. The light bill is ridiculous for the month of December.”

Young still remembers the best gift he ever got on Christmas – a Mongoose bike that he had wanted for months. He was eight years old. To his delight, he found the bicycle waiting for him under the Christmas tree.

“I wanted this Mongoose bike,” Young said. “It was a chrome bike. I wanted it so much that I never rode it because I didn’t want anyone to beat me up and take it. I kept it in my room. I never rode it. I wiped it down every day. I was obsessed with this bike.”

To Young’s relief, the bike was never stolen. Sadly though, it also was never used.

“It’s still in my garage to this day. My dad and I cleaned out the garage when I was home during the bye week and we started laughing because I still haven’t ridden that bike,” he said.

Of course, Christmas isn’t all about the presents. At its root, the holiday is a special time to spend with the ones you love.

“My parents weren’t millionaires, but they were rich with love,” Young said.

The third-year pro remembers his house always being filled with holiday music. He remembers relatives playing dominoes and Spades and other card games. And he remembers his dad and his brother in the kitchen making delicious holiday fare.

“My dad will cook. He’s the chef. I’ll just eat until my stomach pops,” the fullback said.

When asked what’s in the sauce that makes it so special, Young couldn’t say. That’s because the recipe is a closely-guarded secret.

Of course, as the years go by and Young has gotten older, the meaning of holidays has changed for him. The presents and food become less important and it’s the time with family that starts to matter most.

“I understand family values more. Just being a little bit older, being on my own, I still love the fact that my family wants to be with me on Christmas and I want to be with them,” Young said.

He also enjoys a chance to give back to the two people who gave him so much growing up.