young players are making a difference for redskins 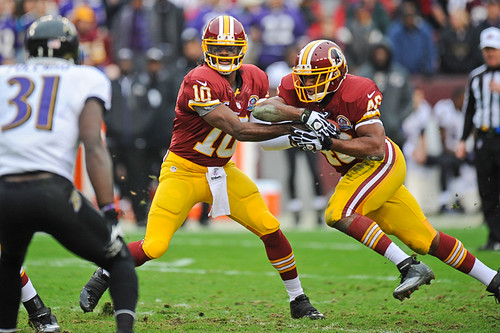 A little over one month ago, the Washington Redskins were done.

A disappointing loss at home to a 1-6 Carolina Panthers team all but assured another forgettable season for the burgundy and gold.

After dropping a game to a last-place team riding a five-game losing streak, head coach Mike Shanahan sure sounded as if he was admitting the competitive portion of the 2012 season was in the books.

“You lose a game like that, now you’re playing to see who obviously is going to be on your football team for years to come,” he said. “I’ll get a chance to evaluate players and see where we’re at.”

The Redskins headed into the bye week with a defense that excelled at nothing, an offense that had suddenly gone cold and a special teams unit that did little to tilt games in Washington’s favor. At the midpoint of his five-year deal, Shanahan’s record running the Redskins was a pitiful 14-27 and sports fans — both locally and nationally — began to openly wonder if the coach’s best days were behind him.

Add in the lack of cap room and draft picks and there was very little to like about what appeared to be on the horizons for the Washington Redskins.

And then something crazy happened — the team used the bye week to get healthy and to refocus their energy on avoiding mistakes and simply doing a better job of executing. It sounds simple, but that’s one of the main reasons the Redskins are now considered one of the hottest teams in football.

“We have a bunch of young players on offense,” said left tackle Trent Williams. “Any time your offense is based around so many young players, it takes time to mesh. Everyone’s getting more game experience, and game experience is the key to improving as a player and as a team. Everybody’s starting to be where they’re supposed to be and we’re starting to shoot ourselves in the foot less, if that makes sense.”

For most of the year, this franchise has been looked at as a franchise quarterback and a bunch of spare parts. Well, the narrative has to change after the thrilling-come-from-behind overtime victory against Baltimore.

With quarterback Robert Griffin III sidelined due to a knee injury, backup Kirk Cousins was thrust into action with the game on the line against a very talented opponent. In his only other regular season action, Cousins threw two interceptions against the Atlanta Falcons. But that was two months ago, and this is a completely different team now.

The Michigan State standout threw two passes and carried the ball once. That was enough to get the job done this time around.

“Kirk came in and did a great job,” said Williams. “I mean, Robert is a great player, but it does take 11 players to win. Kirk came in and we couldn’t ask him to do any more than he did. He led us down the field. He got us a two-point conversion. You can’t write a script better than that.”

Here’s a unique statistic for you: Cousins’ comeback made the Redskins the first team since the 1970 AFL-NFL merger to have two different rookie quarterbacks lead fourth-quarter comeback wins in the same season.

“It just shows we have depth and we’re not just based off of any one player,” Williams said. “We can spread the ball around. Most of all, it shows we can move the ball.”

As cliche’ as it sounds, the 3-6 start really did force the players in the Redskins’ locker room to rally together and band together. They saw what the critics were writing and heard what the so-called experts were saying about them, and they took it personally.

“Just a few weeks ago, we were the laughingstocks of the NFL,” said Williams. “All we had was each other. With this four-game winning streak, people are starting to pat us on the back but we still have that same outlook that all we have is each other. In times of adversity, we have to come together and that was definitely a time of adversity.”

Even now, as the team continues to play inspired football, mistakes are going to happen. Case in point: for the second-consecutive game, rookie running back Alfred Morris coughed up the football — this time in the red zone. But before he could even think about hanging his head in disappointment, his teammates were there to build the youngster back up.

“I didn’t beat myself up, but I knew I owed the team,” Morris said. “Me being young, I could have definitely been down, but I didn’t and our teammates, they don’t beat us down. They always lift us up. They were like ‘Don’t even worry about it. Just keeping playing and doing what you’ve been doing.’ I took the blame for us being down at halftime.”

As you know by now, the Redskins rallied to defeat the Ravens 31-28. And while no one wants to see RGIII out of action for any length of time, this win did show that the Redskins are finally capable of handling adversity and that first- and second-year players other than Griffin and Morris are capable of stepping up and making a positive impact.

In addition to Cousins’ storybook ending, there was also rookie cornerback Richard Crawford’s 64-yard return in overtime that was the team’s longest punt return since 2008 (a span of 67 games). There was second-year kicker “Cobra” Kai Forbath hit the 34-yard game winner, improving him to 14-for-14 for his career. He now stands two field goals shy of matching Garrett Hartley’s NFL record for consecutive field goals made to start a career.

In short, the 2012 Redskins have been forced to lean heavily on a handful of very young players and each of those players have risen to the challenge. In the span of four games, the future prospects of this franchise have changed dramatically.

“It feels good,” said receiver Santana Moss. “I’m out of body right now. I’m floating somewhere around here. I’ve been waiting for this moment where we can beat this kind of team and it’s one of the reasons why I wanted to be here a couple of years ago when it was time for me to sign back. There’s nothing more important for me than to come out here and be part of something like this.”

I have a feeling most ‘Skins fans understand where Moss is coming from. It’s been a long, long time since this team did something noteworthy. There’s still plenty of football left to be played and Griffin;s lingering knee injury is obviously reason for concern, but for the first time in ages, the Redskins are actually giving folks a reason to tune in on Sundays.