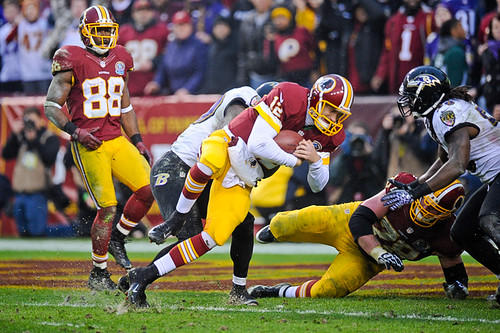 1. “The Memory Remains” by Metallica

The Washington Redskins defeated the Baltimore Ravens in a thrilling come-from-behind victory. Their 31-28 overtime win came courtesy of the backup quarterback, who was thrust into action with the game on the line in the fourth quarter after the face of the franchise — quarterback Robert Griffin III — was knocked out of the game with a knee injury.

Even after the offense scored an improbable 11-yard touchdown with 29 seconds remaining in regulation, they still needed a two-point conversion just to force the game into overtime. And once again, the backup delivered.

Fast forward to overtime and the Ravens get the ball first, with the chance to feast on a decidedly mediocre Redskins defense that had already allowed four touchdowns on the day. But Baltimore’s offense stalled after just three plays and was forced to punt the ball away.

What happens next is almost too good to be true — a rookie cornerback (who most ‘Skins fans couldn’t identify if he was standing in front of them) returned the punt 64 yards and the game was essentially over.

Here’s the craziest thing about this amazing storybook ending — it almost didn’t happen.

If not for an instant replay review by the officials, the Redskins never would have had the opportunity to put together the clutch 13-play, 84-yard fourth quarter drive. That’s because tight end Niles Paul, who struggles to catch passes with any level of consistency while on offense but is typically pretty solid on special teams, fumbled the ball on a kick return with less than five minutes remaining.

Paul definitely coughed up the ball and the Ravens definitely recovered it. But Ravens receiver David Reed was ruled out of bounds before he had complete control of the football, and the Redskins retained possession.

“I didn’t know what the call was going to be. I was hoping that it was out of bounds,” Paul said. “I felt like it could have went either way. Luckily it went ours.”

Had the officials stuck with the original call, Baltimore’s offense would have had the ball on the 15-yard line with an eight-point lead and less than five minutes to play. Even if they only settled for a field goal, that would have likely been enough to seal the victory.

But because the bounces continue to go Washington’s way during the second half of the season, Paul was bailed out and the Redskins still had a chance to make magic happen.

When Griffin hurt his right knee on a 13-yard scramble with 1:56 remaining in the fourth quarter, it forced backup quarterback Kirk Cousins into the game because injury occurred during the final two minutes.

The Redskins were faced with a 3rd-and-6  from the 40-yard line and their best player was standing on the sidelines. Cousins’ pass attempt was not completed, but the Redskins lived to see another day thanks to a pass interference call on cornerback Chris Johnson.

‘Skins fans were able to breathe a huge sigh of relief though as RGIII trotted back onto the field to resume command of this vital drive … until he had to leave the game for good just four plays later.

“At some point you have to do what’s right for the team,” Griffin said. “If I would have played for the rest of the game, I probably would have hurt myself even more. You just need to trust those guys and trust yourself when you know enough is enough. When I first came on, I didn’t think enough was enough, but after being out there for a few plays and realizing that I really couldn’t do too much, I had to get out.”

Cousins took over again on 2nd-and-20 from the Baltimore 26-yard line, and wasted no time showing he’s more than capable of moving the chains with a 15-yard completion to receiver Leonard Hankerson. On the next play, the Michigan State standout was even better — rolling out of the pocket and finding a wide open Pierre Garcon for the score.

“The touchdown was an off-schedule play, I tried to start my read and did not feel comfortable in the pocket and waiting on it,” Cousins said. “I think in some respects I had learned from the [Atlanta] Falcons game, when I threw my second interception in that game I just waited too long on it and tried to do too much. So I thought ‘I am going to make something happen and try to do my best ‘RGIII,’ if you will. Pierre ended up coming off his route and breaking away, breaking open, wide open, all I had to do was put it in his arms.”

To recap, Cousins attempted two passes. He completed them both for 26 yards. One was for a touchdown. Add in a successful two-point conversion and that was good enough to give the youngster his first NFL victory.

Coming into this game, any reasonable sports fan would have thought Baltimore held a huge advantage over Washington in special teams. That’s because, according to the Football Outsiders’ DVOA rankings, the Ravens have best special teams unit they’ve ever tracked.

Meanwhile, the Redskins have been saddled all season long by an ineffective Brandon Banks in the return game. When he’s not fumbling the football, Banks has spent much of his free time this season running the ball out of the end zone on kickoffs at the worst-possible time — ensuring Washington starts their next drive with terrible field position.

Mercifully, head coach Mike Shanahan finally made the decision this week to bench Banks and give someone else a chance.

Enter cornerback Richard Crawford, a rookie out of Southern Methodist, who played well in training camp and the preseason, but has struggled to make the active 53-man roster on gamedays.

Crawford got three chances to show what he was made of and it’s safe to say he made the most of those limited opportunities. The 22-year-old fielded three punts against Baltimore for 100 yards — 64 of which came on a pivotal return in overtime to give the Redskins prime field position to attempt the game-winning field goal.

“It was kind of like the Red Sea,” Crawford said. “I saw where I had to go and I just ran that way. I credit my teammates for blocking. I’ve just got to finish it and score next time.”

Because the Redskins went on to win the game, more than a few of Crawford’s teammates were happy to give the rookie a hard time for getting run down by a punter.

Like Crawford, kicker “Cobra” Kai Forbath was called upon three times and, like Crawford, Forbath rose to the challenge each time his team needed him. Not only was he perfect against Baltimore, but the second-year pro has been flawless in his first season with the Redskins — connecting on all 14 field goal attempts this year.

“It was huge. Huge win for our team,” Forbath said. “I was telling [punter] Sav [Rocca] that a lot of NFL games come down to field goals and we hadn’t had one, so I kind of had a feeling today was going to and it did. Fortunately, we came out on the right side of it.”

It certainly appears as if Washington has solidified the kicker position for the first time in nearly two decades. If that’s the case, then get used to this song. You’re going to be hearing a lot of it.

For the second-consecutive week, Washington’s defense appeared to be asleep at the proverbial wheel during the first half of action as the opposing team marched up and down the field with ease.

Thankfully though, for the second-straight game, the Redskins defense woke up at halftime and actually bothered showing up for the final two quarters.

This defensive players on this roster don’t have a ton of name recognition, but they’re starting to have a knack for stepping up at key moments.