photos from the sidelines: week 14 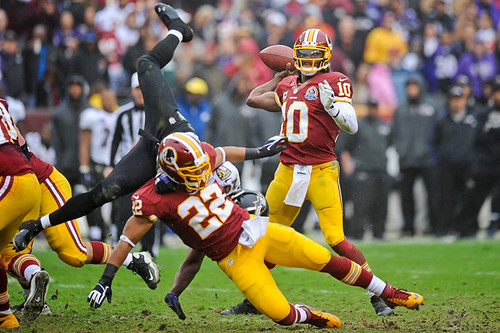 At some point, we’re all going to have to stop and admit that there just might be something special about the 2012 Washington Redskins.

Of course, that didn’t appear to be the case as this team limped into the bye week with a 3-6 record thanks in large part to a three-game losing streak.

Now though, the Redskins appear fully capable of beating anyone and everyone — even when they’re not playing their best football.

The Baltimore Ravens are a perennial playoff team that, year in and year out, rank among the league’s elite thanks to a well-rounded squad that tends to excel in all three phases of the game.

The Washington Redskins, for far too long, have been a fragile snowflake of a franchise that is seemingly incapable of handling any adversity whatsoever. And yet, for one day at least, none of that mattered as the Redskins found a way to win on a day when their franchise quarterback Robert Griffin III wasn’t at his best.

Not only did RGIII struggle in the face of a solid Baltimore pass rush, but he was then forced out of action after spraining his right knee. In years past, this would have been more than enough to doom Washington.

But Griffin’s teammates stepped up in a large way on Sunday and now the Redskins are riding high on a four-game winning streak and have a wining record in December for the first time in far too long.

With that in mind, please feel free to peruse my favorite photos I was able to capture from the sidelines this week. The players put together a monumental effort to defeat a talented Ravens squad, so it’s the least you can do.