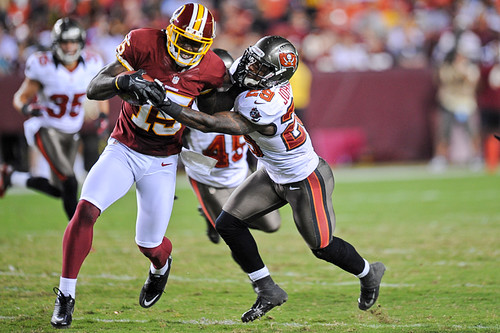 The mind of a child is a beautiful thing. An oversized cardboard box or a couple cushions from a sofa provide ample opportunity for a week’s worth of entertainment. In most cases, if someone asks you what you want to be when you grow up and you don’t know, you’ve got all the time in the world to figure it out.

Unfortunately though, that isn’t the case for everyone.

Take, for example, Washington Redskins receiver Joshua Morgan, who was forced to grow up much faster than he probably should have had to because of the tough Southeast D.C., neighborhood his family lived in.

If it was up to Morgan, he would have spent every waking moment of his childhood playing basketball, going to school and hanging out with friends.

“Don’t get me wrong, I had a lot of fun as a child and I was a straight A student, but growing up where I did in D.C. was just a rough situation,” he said. “I was forced to experience things like death sooner than you would have liked. Like having to go to my friend’s funeral when I was 12 or the fact that I lost three or four of my friends to gun violence before I even got to ninth grade. That stuff makes you grow up fast.”

How was Morgan able to avoid the same pitfalls and mistakes that too many of his neighborhood friends could not?

“Sports and my grandmother,” Morgan said. “My grandmother was the type of person who was always involved and always in my ear. We were in church every day of the week and she kept me out of trouble. Honestly, I had a lot of people  who saw something in me even before I did and they worked hard to keep me out of that element. I had so many people looking out for me and I tried to learn from other people’s mistakes.

“I had such a strong inner circle around me — starting with my grandmother, who was my main prayer warrior — and everyone had a hand in helping me out,” he continued. “Even the ones who were out there hustling on the corners in my neighborhood would tell me, ‘Man, you’re going to be the one to make it out of here. We’re going to keep you out of this and we’re going to keep you out of that. You don’t need to be out here doing none of this. Stay on that basketball court and you’re gonna get out of here. Just watch.’ I was blessed to have so many people in my circle.”

Anyone who saw him play back in the day had to admit that Morgan was talented on the basketball court. He was a slasher who thrived with the ball in his hands, in the mold of Miami shooting guard Dwyane Wade, and the 27-year-old readily admits he was convinced he’d be the next Michael Jordan — until he stopped growing at 6-foot-1.

“I could take a game over whenever I needed to,” Morgan said. “To this day, there are still people who believe I was always a better basketball player than a football player. I mean, everybody’s got their own opinion, but obviously I made the right decision by sticking with football.”

While Morgan’s first love was clearly hoops, it turned out he was pretty good on the gridiron as well. By the time he got to H.D. Woodson High School, he had learned to channel his explosiveness and passion from basketball into football.

“Once I saw what guys like Jerry Rice and Randy Moss were able to do at the wide receiver position, I knew that’s what I wanted to be,” he said.

Morgan was a diehard Redskins fan growing up — Art Monk, Doug Williams and John Riggins were his favorite players from the glory days — but he wasn’t able to go to games very often.

“We barely had enough money for groceries or to keep the water or heat on in the house, so I didn’t get to go to a lot of games. But I got to hear a lot of them on the radio and I tried to sneak in to a couple of them when I could,” Morgan said with a laugh.

Because Redskins game were such a rarity, football was more of a hobby or a way to hang out with friends than a possible career choice for Morgan. In fact, it wasn’t until his freshman year at Virginia Tech, when he had a breakout game in the 2005 Sugar Bowl against Auburn, that Morgan began to believe he truly had a shot at playing in the NFL.