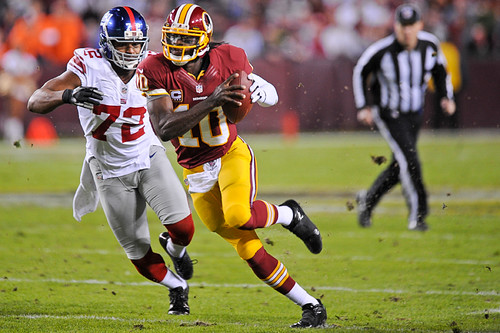 After finishing up his post-game press conference duties, Washington Redskins franchise quarterback Robert Griffin III paused for a moment as he walked back into the locker room.

The rookie was still wearing his grass-stained uniform after a tough and physical NFC East battle against the New York Giants, but before he could shower and head home there was one thing left to do.

Griffin paused, surveyed the room and said to no one in particular, “All smiles. We must have won.”

Of course, the last time the Redskins bested the Giants on Monday Night Football, Ronald Reagan was still the president. So in all likelihood, Griffin is simply too young to realize the significance of Washington’s 17-16 victory over New York.

It would be foolish to start spitting out hyperbole about one Week 13 victory being franchise altering or anything like that, but the truth is, these Washington Redskins are attempting to re-write the narrative.

For years, the Redskins have been known as a mentally weak team who fell apart at the first sign of adversity.

They lost more “must-win” games than anyone could ever hope to keep track of. They suffered more letdown games to supposed inferior opponents than should be legally allowed. In short, they’ve lost a ton of games over the last few decades and given the local fanbase very little to feel good about.

By all accounts, it was more of the same this season as Washington continued to find ways to give away wins to mediocre (or worse) teams like the St. Louis Rams and Carolina Panthers.

But a simple three-game winning streak has changed the perception of this team. Not only have the Redskins won three consecutive games for the first time since ’08, but in doing so against their biggest rivals — Philadelphia, Dallas and New York — they’ve shown that maybe it isn’t so smart to rush to judgment on this year’s squad.

If nothing else, they’ve found a way to make football fun once again in our nation’s capital.

Speaking of Griffin, he’s officially reached a level where he’s so good, even his mistakes tend to work out in his favor — as evident by Washington’s first quarter touchdown.

On 2nd-and-2 from the 28-yard line, RGIII decided to tuck the ball and began racing upfield. Griffin picked up 12 yards and then, as he was being tackled by a Giants defender, the ball popped out right into the open arms of receiver Joshua Morgan, who raced into the end zone for his first touchdown as a member of the Redskins.

“We didn’t run (that play) in practice because we wanted to save it for the game,” Griffin said with a grin. “I knew he was going to be there for it … Joshua did a good job being in the spot where he was supposed to be.”

Now, to be fair, Morgan swears it was a designed pitchout play and that’s the reason he was standing where he was when the ball came flying in his direction. But either way, those are definitely the types of bounces that have rarely worked out for this franchise over the years.

“It was an option play, so I just stayed and kept my pitch relationship on the option,” Morgan told me after the game. “It just so happened that the ball came out there. That’s just the way the ball bounces, bounced our way today. God was all over us.”

Either way, Morgan definitely picked a unique way to score his first touchdown in Washington.

Since he’s returned to the lineup, it’s clear the coaching staff has made it a priority to get the ball in the hands of receiver Pierre Garcon. With his blazing speed, Garcon has the uncanny ability to turn a modest gain into something special. Don’t believe me? Just ask New Orleans or Dallas.

Well, on this night, Garcon didn’t have one spectacular highlight-worthy touchdown — instead he simply provided Griffin with a consistent target all night long. The 26-year-old routinely found ways to get open against New York and his quarterback was happy to reward him with the football.

By the end of the night, Garcon had eight catches for 106 yards and a touchdown.

“After that first quarter in the first game, I think people could see what big play capabilities he had,” head coach Mike Shanahan said. “Until you do it, there’s always question marks for everybody. How big is he to your offensive team? I think everybody saw in the last couple weeks how much he means to our football team – very explosive. Every time he touches the football he has a chance to go the distance. I love the way he competes – both in the running game and the passing game. He’s a very smart player as well. He’s been a big plus for us.”

While those numbers are respectable, they only tell half the story. The rest of the Redskins pass catchers finished the game with just five catches for 57 yards.

“I think stats don’t really matter,” Griffin said. “We won the game, and we made plays in crucial situations. The offensive line stepped up big when we needed them to. We won the game. We played more physical and that was the key.”

4. “My Boy Builds Coffins” by Florence + The Machine

Through 12 games, the Redskins lead the league with 2,006 rushing yards on the year. Thanks to a dual attack featuring Griffin and rookie running back Alfred Morris, the Redskins have shown they finally have a ground game people need to gameplan for.

Three times this season Washington has rushed for 200 yards or more in a game, and two of those instances came at the expense of the Giants.

Clearly the Redskins have found a blueprint for success against the defending Super Bowl champions and it involves handing the ball of to Morris early and often.

“I’m not going to take any credit for Alfred’s success, aside from lifting with him in the offseason, maybe getting a little bit stronger,” Griffin said. “He’s done a lot of great things for us. We say it looks like he’s out there playing peewee football — he just won’t go down. He plays every play like it’s his last and that’s what we love about him, but I definitely look forward to playing with him for many years.”

On Monday Night Football, Morris not only carried the ball 22 times for 124 yards against the Giants, but he also set the franchise record for most rushing yards by a rookie.

“That’s a blessing. Just coming from where I came from, a lot of people counted me out,” Morris said. “They didn’t even think I was going to make the team. I made the team, I rushed for 1,000 yards, and I did a lot of things that I myself didn’t think I was going to be able to do coming in. But I believe in myself, have a coach that believes in me, and that makes me push that much harder.”

Like most opponents who faced them earlier in the year, I’ve beat up on Washington’s defense throughout the season.

They’ve had a knack for giving up too many big plays, not generating enough pressure and have been among the worst defensive units in football all season long.

But while the first half wasn’t exactly their best showing this year, the still managed to keep the Giants out of the end zone, for the most part. New York converted seemingly every third down opportunity they had in the first half, but they didn’t really have anything to show for it.

As any long-time football fan knows, forcing teams to settle for field goal attempts is huge, and it definitely played a factor in this game.

“Any time a team is 8-for-10 in the first half on third downs, you’re going to be in for a long half,” Shanahan said. “We kept them to 13 points, which was good. In the second half, obviously we got much better in the third down area. That was the difference in our defense playing at that level and holding them to obviously three points.”

The defense didn’t create any turnovers and only sacked Eli Manning once, but they still did enough when the game was on the line to close out a talented opponent. Thats’ really all you can ask of them.