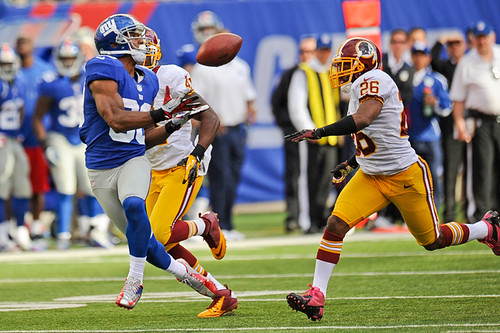 When the Washington Redskins take the field tonight against the New York Giants, they should be considered heavy underdogs. Why? Because all indications are this is a game the Redskins simply cannot win. Don’t believe me? Read on:

The last time the Redskins put together a modest three-game winning streak was the beginning of the Jim Zorn era. Seriously, how is that even possible?

After dropping the season opener to the Giants, the maroon and black recorded four-consecutive victories (besting New Orleans, Arizona, Dallas and Philadelphia) to improve to 4-1.

Amazingly, Zorn and friends won two of their next three games and stood at 6-2 at the midpoint of his inaugural season. Of course, he went 6-18 during his final season and a half in Washington, so let’s move on.

In each of head coach Mike Shanahan’s first two seasons in Washington he’s put together exactly one two-game winning streak. And that’s it.

While it doesn’t sound like that big of a deal — winning three games in a row against your biggest rivals — it’s proven to be a monumental challenge for the Redskins.

The last time it happened, Washington had to coax Hall of Famer Joe Gibbs out of retirement.

And sadly, the last time Washington won three-straight games against divisional opponents prior to ’05 was back in 1999 — when the Arizona Cardinals were still in the NFC East.

If you’ve ever wondered why there are so few ‘Skins fans outside of Maryland, Virginia and the District of Columbia, it probably has something to do with the fact that this team has been fairly dreadful for the last 20 years.

Not only that, but in the rare instances when someone decides to put Washington in a nationally televised game, the Redskins usually lose — and lose badly. So basically, if you live on the other side of the country and only get to see the Redskins when they play a primetime game once or twice a season, you’re probably pretty used to seeing them get whipped handily.

In case you’ve been living under a rock, here’s a breakdown of just how pitiful the franchise has been on Monday Night Football since ’00:

To recap, the Redskins have lost four-straight Monday night games against divisional opponents (by a combined score of 149-73), haven’t won on Monday night since ’07 and have just one win ever at FedEx Field on Monday Night Football.

Once again: Washington’s lone victory on Monday Night Football at FedEx Field came all the way back on Oct. 13, 1997, when they defeated the Dallas Cowboys, 21-16. Since then, they’ve dropped 10 straight Monday night contests at FedEx Field.

Not really sure there’s much left to say about this. Even in games when they’ve performed reasonably well (like the first half in Dallas), they’re still more than capable of falling apart at a moment’s notice (the second half in Dallas).

5. Eli Manning is due for a breakout game.

The two-time Super Bowl winning quarterback has not performed up to his typical stellar level of play for New York this season. Prior to his three-touchdown, zero-interception beatdown of Green Bay last week, Manning had just one touchdown while throwing six interceptions in his previous four games.

One of those games was New York’s 27-23 victory over the Redskins, so the Giants have shown they can win even when Manning isn’t at his best.

Like him or not, Eli has proven during his nine-year career that he’s got a knack for stepping up his level of play when the game is on the line (as evident by his 77-yard touchdown pass to Victor Cruz with 1:13 to play Week 7), so it’s tough to imagine him not having a solid game tonight.

And yet, because there will still be a number of ‘Skins fans who refuse to accept that this game has already been decided, here’s one reason why Washington could defeat the Giants on Monday Night Football:

He’s already snapped every other streak he’s faced this season (losing on Thanksgiving day, losing at Cowboys Stadium, etc.), so why not add one more line to his already impressive resume?

I guess they can go ahead and play the game after all.