giving will montgomery credit for his stellar play 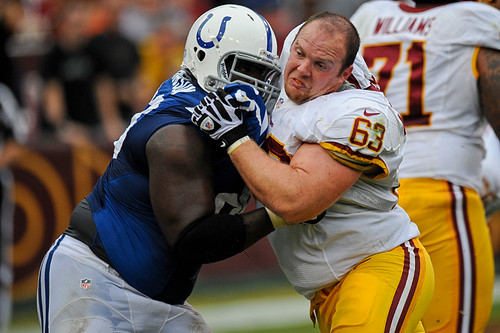 For more than a decade, the Washington Redskins struggled to score points with any level of consistency.

Regardless of whether the team was coached by the great Joe Gibbs, the terrible Steve Spurrier or someone in between, the team failed to finish in the top 10 in points scored from 2000-11.

Mercifully, that trend appears to be over — thanks largely to a dynamic duo of first year players in franchise quarterback Robert Griffin III and running back Alfred Morris, the Redskins now march up and down the field with ease.

Just ask the Philadelphia Eagles and Dallas Cowboys, who had no answer for a Washington offense that pistol whipped them for a combined 69 points in back-to-back wins.

These are good days for the Redskins — with a quarterback whose has played his way into the discussions for rookie of the year and league’s most valuable player honors, and a running back who currently ranks fifth in the league in rushing and is on pace to finish with one of the best statistical seasons in franchise history.

Other players, such as veteran receiver Santana Moss and left tackle Trent Williams, have also been recognized for their consistently solid play this season as well, but the man in the middle of it all had completely flown under the radar … until now.

Ask any fan of the Redskins to name the top players involved in head coach Mike Shanahan’s high-powered offense, and it’ll take a while for them to get to center Will Montgomery. That’s probably because there just aren’t very many stats out there dedicated to tracking the play of individual offensive linemen.

But this week, the 29-year-old was thrust into the spotlight after receiving high praise courtesy of Sports Illustrated’s Peter King, who posted the following in his Monday Morning Quarterback column this week:

Dr. Z Unsung Man in the Trenches of the Week

(The award for the offensive lineman who was the biggest factor for his team in the weekend’s games, named for my friend Paul Zimmerman, the longtime SI football writer struggling in New Jersey to recover from three strokes in November 2008. Zim, a former collegiate offensive lineman himself, loved watching offensive line play.)

Will Montgomery, C, Washington. A standout all season for Washington, he’s the No. 2 rated center in the game this year, according to ProFootballFocus.com rankings. Montgomery kept Robert Griffin III clean all game Thursday and was a force in the running game as well. The Redskins did a very smart thing in the offseason when they knew they were in cap jail but also knew they wanted to keep this promising 29-year-old center as the centerpiece for a rebuilt line to protect RGIII. They signed him to an extension through the 2016 season, guaranteeing only $2.5 million of his deal; Montgomery will earn $12 million over the next four years, a good deal for a center who earned it, and a good deal for the team paying him.

Usually when a lineman gets noticed, it’s because they did something wrong. Clearly, this is uncharted territory for Montgomery and the rest of the Redskins offensive line.

“Will does a great job for us,” said right tackle Tyler Polumbus. “He knows our scheme really well, he knows how to get our guys in the right position and he’s certainly a leader on this team. I wouldn’t necessarily call him the most vocal guy in the world, but he’s going to go out there and handle his business. He goes out there and leads by example.”

While most football fans spend their time dissecting skill position players, Montgomery’s teammates leave little doubt how much they think of his stellar play.

“Will is our leader up front,” said left tackle Trent Williams. “He’s our quarterback on the line. He gets everybody going to the right spot, so I’m not surprised at all. He does his job to the T and he makes everybody else’s job easier too. I think he deserves the attention. He should be number one. He is in my eyes. He has that type of talent and he works that hard.”

“Will has been a journeyman most of his life,” Williams said. “Not being drafted. Being a walk-on. But he’s worked hard and become a student of the game. I think he deserves every accolade he gets.”

Technically, the Virginia Tech product was drafted by the Carolina Panthers in the seventh round (234th overall) of the 2006 NFL Draft, but Williams’ point remains the same. No one knew who Montgomery was when he first came to Washington. Since then, he’s quietly gone from simply fighting for a roster spot to now being considered one of the best players at his respective position.

“I think it’s great when people take notice of your play,” Montgomery said. “I think it’s a credit to our offensive line in general, and obviously to Alfred and Robert for making things happen as well. That and playing next to [guard Kory] Lichtensteiger and [guard Chris] Chester, who both work with me in tandem, helps make everything seamless out there. I don’t know if it’s anything I’m doing out there. It’s more about what we’re able to do as a unit.”

It’s understandable that Montgomery would want to share the wealth with his teammates and all, but the fact is, offensive linemen don’t get to hear positive comments about their play all that often. If they miss a block or blow an assignment, everyone rushes to let them hear about it, but comments like this don’t come around every day.

“Yeah, I guess I’d rather it be this than you guys yelling at me for giving up five sacks or something,” he said with a laugh. “You guys are going to write something one way or the other, so it might as well be positive, I guess.”

This can be filed in the “positive” category for Montgomery: after working his way into the starting lineup in 2010, he’s become a mainstay in the heart of the offensive line — starting at center in all 27 games over the last two seasons. What’s been the secret to his success?

“In this offense, we’re just trying to get to our landmarks and make sure the defense can’t penetrate,” Montgomery said. “Then we can let our running backs, quarterbacks and receivers do the rest. We just need to go out there and show up each week, and basically let the rest of the offense work on its own.”

Okay, okay, I get it. Offensive linemen prefer to fly under the radar. They’re typically blue-collar workers who would much rather see the attention directed anywhere else in the locker room. But the point remains — prior to this season, Washington’s offensive line was considered a liability and now he’s viewed as one of the premiere players in football.

“I don’t think I ever bought into the criticism about the offensive line, obviously,” he said. “I tend not to read too many articles because they’re either going to say how great you are or how bad you are, and I think we’re probably somewhere in the middle of the two. We just want to come out and give a great effort each week and give ourselves a chance to win.”

Fine. Have it your way, Will. I’ll stop trying to convince you that people think you’re good at what you do.