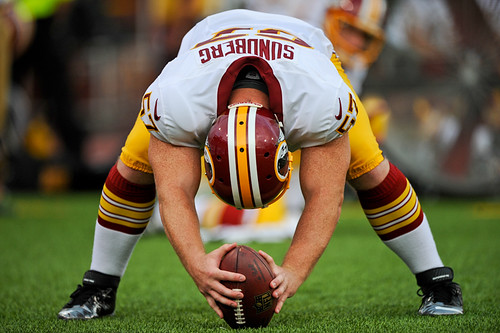 During the first punt of the game, with under a minute left in the second quarter, Sundberg’s left arm got pinned between two helmets and he broke his ulna, one of the two long bones in the forearm. At halftime, the injury was confirmed by the training staff. The bone was broken three-quarters of the way through approximately three inches below his wrist.

“I had to make a decision on what we were going to do for the rest of the game,” Sundberg remembers. “Will Montgomery, the center – he’s our backup snapper – I was watching him snap a little bit and I made the executive decision that I’m going to fight and get through the game.”

As someone who would let his mom, who works for TASER, test out products on him growing up, Sundberg is no stranger to pain. Of course, breaking an arm is a different sort of pain from getting tased.

To manage the pain during the game, Sundberg tried to convince himself it wasn’t that bad.

“I tried to use some positive reinforcement techniques to tell myself it didn’t hurt as bad as it really did,” Sundberg said. “I snapped the ball eight or nine times after that, but honestly it wasn’t nearly as bad on the field as it was warming up to actually snap. That’s a tough one because I’m crazy about my warm-up regimen. I snap a certain amount of balls before every snap. On the sidelines, trying to throw them back was more difficult than being in the game because, when I was in the game, I was able to turn everything off and let my body react. On the sideline, I was very much aware of how much my arm hurt.”

Somehow, Sundberg was able to make it through the rest of the game, snapping the ball for four punts, two field goal attempts and two extra points in the second half. The good news was that he was able to contribute to his team’s big win over the Saints. The bad news was that Sundberg was placed on eight-week injured reserve and the ‘Skins brought in Justin Snow to take over his job in the interim.

The third-year pro still showed up to the Redskins training facility every day, but he wasn’t able to practice with his teammates for the first six weeks. He still attended all of the team meetings and did his best to be an active part of the team, even though he couldn’t contribute on the field. Being injured and forced out of action was tough, not just physically, but mentally.

“I’ve never been hurt before. I’ve never missed practice, let alone a game, so I’ve never not been able to play. I think the most difficult thing was just watching my team play without me from home,” he said.

Head coach Mike Shanahan doesn’t allow players on injured reserve to stand on the sideline during games. So while Sundberg could have driven to FedEx Field to watch the games from a luxury box in the stands, he elected instead to watch the games at his house.

While he looked forward to seeing his team compete and wanted to see them win, it was still difficult for Sundberg to enjoy the game as a spectator.

“It’s hard to just be a fan because I’ve got so much more invested, especially with knowing everybody,” Sundberg said. “I wanted everyone to play well and wanted the team to succeed even if I wasn’t playing. It was tough, but I didn’t really have a choice.”

The most challenging part of watching the broadcast from home, Sundberg said, was listening to the commentators weigh in on his team and his teammates.