alfred morris doesn’t know what the rookie wall is 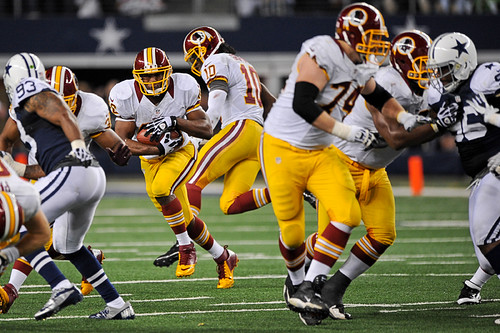 Lost amid all of the fanfare and attention being heaped upon his Heisman Trophy winning teammate is that fact that Washington Redskins running back Alfred Morris is putting together a fairly remarkable inaugural season.

The Florida Atlantic product currently ranks fifth in the league in rushing with 982 yards and six touchdowns, which means if he can pick up 18 rushing yards at some point during the next five games, he’ll be Washington’s first 1,000-yard rusher since head coach Mike Shanahan came to town.

In fact, the last Redskins running back to gain at least 1,000 yards in a season was Clinton Portis, who last accomplished that feat in ’08. It should be noted that Morris’ favorite player growing up was, in fact, Portis, which makes this that much sweeter for the rookie back.

“I don’t think anybody expected Alfred to be where he’s at right now in terms of his production and stuff,” said tight end Logan Paulsen. “But when you watch him run, he’s such a physical guy. The first guy rarely brings him down and that’s something that’s invaluable. As a guy who blocks a lot, it’s like you have a little bit of a margin for error almost because he’s going to still make a play.”

Roy Helu Jr. Evan Royster. Tim Hightower. Ryan Torain. Tashard Choice. Keiland Williams. James Davis. Larry Johnson. Rock Cartwright. Ladell Betts. Quinton Ganther. Marcus Mason. Those are all of the running backs who have been given a chance to show what they’re made of since the last Redskins 1,000-yard rusher. None of them came close to the level of production Morris has logged through just 11 games.

“That’s just a testament to how he’s worked,” Paulsen said. “He just runs with such tenacity and that’s so awesome to see.”

Paulsen isn’t the only player who enjoys blocking for a one-cut runner like Morris.

“I think he has great vision,” said center Will Montgomery. “He’s really good at reading one hole at a time and finding an opening. And once he gets to the second level, he’s got the ability to make the last defender miss. Like the run he had against Tampa where he broke it for a long touchdown. That was crazy, and he has that ability each week.”

He’s not the fastest guy on the football field. Hell, he’s not even the fastest player in his own backfield. But Morris still moves the chains with remarkable consistency and dishes out more punishment than he receives. This is why his offensive line loves blocking for him.

“He’s going to turn a negative run into a positive,” Montgomery said. “And with a positive run, he can turn it into a 50-yard run. With a guy like that running as hard as he does, and as shifty as he is, I think a lot of good things are going to happen for him.”

Earlier in the year, Morris would come off the field during third downs in favor of Royster, who the coaching staff felt was better in pass protection. During the last few games though, Morris essentially stays on the field until he feels like coming off for a breather.

“He’s getting much more comfortable with the system,” Shanahan said. “I told him he can stay in there as long as he wants to. When he gets tired, he comes out on his own. He’s got a good feel for our protections right now. Any time he’s in the game, he’s an added threat for us. He feels good enough to pick up all the different protection schemes. He’s strong enough right now where he’ll put his hat in there and do the things that he needs to do to give us good protection. I have a lot of confidence in him. He’s always a threat running the football, so that’s why he’s in there.”

He’s gone from unheralded draft pick to one of the most productive backs in the NFL. He’s a guy most Redskins fans couldn’t pick out of a lineup before the season started, who has already become an every-down back. It’s crazy to think how quickly Morris has become a household name during his rookie year, and he admits gaining 1,000 yards this season will be a memorable achievement.

“It will mean a lot,” he said. “I honestly didn’t think I’d be rushing for 1,000 yards as a rookie. I didn’t think I was even going to see the field until the fifth or sixth game, so for that to happen it would be an honor — especially with such a storied franchise.”

And yet, almost as soon as he finished that sentence, Morris followed it up with one caveat.

“I’ve still got a lot of work to do,” Morris said. “Rushing for 1,000 yards doesn’t mean anything if you’re not in the postseason, if you’re not winning. That’s what I care about is winning.

The 23-year-old has been Washington’s workhorse this season — carrying the ball 208 times in 11 regular season games as well as 39 times during three preseason games. Those 247 carries are already more than he had in either his junior or senior seasons, which is why some people are beginning to wonder if it’s only a matter of time before the sixth-round pick hits the dreaded rookie wall.

“I feel great. I was built for this,” he said. “I was made for this. That’s not me being cocky or arrogant, it’s just the truth. I can take a lot of beatings, I guess. It’s a long season and a lot of people say I’m going to hit the rookie wall. I don’t know what the rookie wall is because I haven’t met it yet. I don’t think I’m ever going to meet the rookie wall. Mentally I just grind through it and physically, I feel great. More than anything I feel that it’s a mental grind.”

Morris is currently on pace to finish the season with 1,428 yards and nine touchdowns. This is noteworthy because, if it happens, Morris will have put together the fourth-best rushing season in franchise history — behind Portis is ’05 (1,516 yards), Portis is ’08 (1,487 yards) and Stephen Davis in ’01 (1,432 yards).

For the record, some of the most product running backs in Redskins history — guys like John Riggins, Terry Allen and Larry Brown — never finished a season with 1,400 yards. But if Morris can avoid the rookie wall, he’s truly got a chance to make his first season a memorable one.