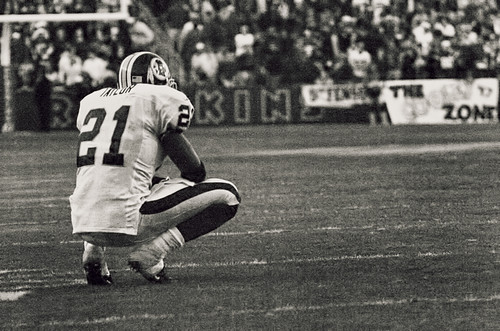 Five years ago today, players, coaches and fans of the Washington Redskins were left in shock and disbelief after the tragic death of safety Sean Taylor.

On Nov. 26, 2007, Taylor suffered a gunshot wound during a botched robbery attempt at his residence in Miami, Florida, and the the 24-year-old passed away a day later.

His death sent the franchise and the entire fanbase into mourning. There were candle-light vigils. There was a televised service which his entire team attended. And there were lots and lots of tears.

I remember two things about that time frame:

For starters, the all-pro safety was shot on my second wedding anniversary. The wife and I tried to go out to dinner that night to celebrate, but neither of us was really in a celebrating kind of mood.

Secondly, I remember the completely mediocre 5-7 Redskins rallying together and reeling off four-straight wins to earn a playoff spot on the final day of the season in Taylor’s honor.

Two of his closest friends on the team — running back Clinton Portis and receiver Santana Moss — essentially put the franchise on their collective backs and willed the team to victory during the final month of the season.

By the time the playoffs rolled around, the players were spent. The Seattle Seahawks were the better team that day, but it didn’t even matter. Simply getting there in Sean’s honor was enough.

After that playoff loss in Seattle, everything changed. Gibbs retired again. Jim Zorn came and went. And then finally, owner Daniel Snyder got himself a legitimate head coach, in Mike Shanahan, and a real general manager, in Bruce Allen, and the Redskins could finally begin to rebuild.

Because that time was so difficult for so many people, I’m always hesitant to talk much about it. To me, even five years later, the wound is still too raw.

But a friend of mine, Adam Vingan of NBC Washington, asked me to answer a few questions about Taylor’s impact on and off the field and I figured I’d share with the class. Here are his three questions and my responses:

This is my eighth season covering the Washington Redskins and during that time, I can say without a shadow of a doubt that Sean Taylor was easily the most fascinating player I’ve ever had the privilege to cover. He only knew one way to play the game — with reckless abandon. He was never comfortable dealing with the media and preferred to let his play speak for itself, which worked out well because he played with such a level of physicality that he absolutely intimidated opponents and made them think twice before coming across the middle of the field. Honestly, he was a throwback player who probably was better suited playing back in the days of leather helmets.

As for my favorite memory of Sean Taylor? That’s easy. His devastating hit on former Bills punter Brian Moorman in the 2007 Pro Bowl still brings a smile to my face every time I see it. No one cares about the Pro Bowl. No one puts forth any real effort during the Pro Bowl. And yet, Taylor nearly decapitated that poor punter because Taylor wasn’t ever really like anyone else.

2. What made him so popular around here? What did he mean to the fans/organization?

First of all, it was Taylor’s play that made him a fan favorite. He was really, really good and he played with a bit of a mean streak. He loved to try and blow someone up early in a game and send a message to opposing receivers that they should think twice before lining up against him. All of that made it easy for ‘Skins fans to justify spending the money on his jersey.

And then there’s the fact that even though Taylor didn’t care for the media, he absolutely loved the fans. I can’t tell you how many times I saw Taylor walk past a media member (who was simply trying to ask him a question after practice) like he wasn’t even there, only to stop and sign countless autographs and pose for photos with kids. Many of his own teammates admit they weren’t all that close with him, but Taylor let his guard down when someone with a small child asked for his autograph. That’s when people like me got to see the real Sean Taylor.

3. How far do you think he could have gone professionally if he hadn’t been taken away from us so soon?

When guys like Clinton Portis, Santana Moss and Ryan Clark tell me that Taylor would have retired as one of the best safeties to ever play the game, I tend to believe them. He was a game changer who excelled in whatever role his coaches put him in. When they put his near the line of scrimmage, he’d relish the chance to blow someone up and when they asked him to drop back in coverage, he’d inevitably find a way to pick off a pass or cause a fumble. Add in the fact that the offense struggled to put points on the board with any level of consistency in those days, and Taylor’s impact on Sundays was huge.

To read the rest of Adam’s article, please click this link.